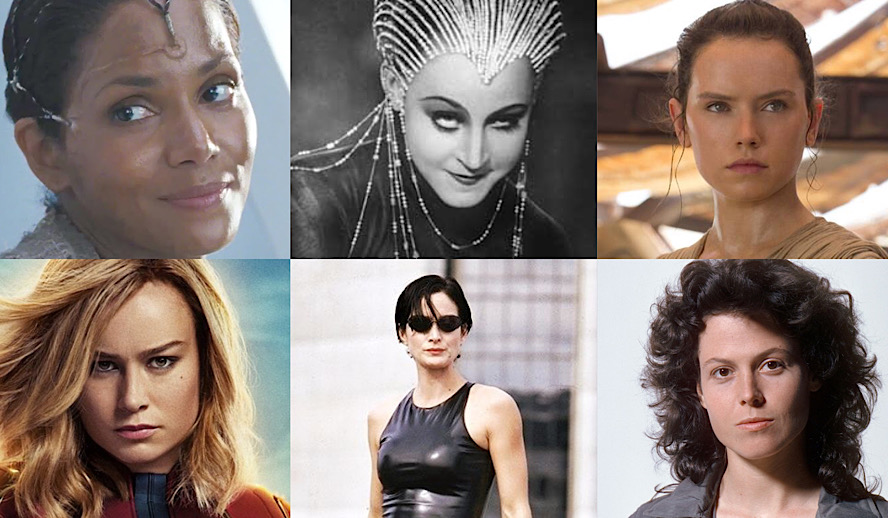 Science fiction shows us worlds that can be vastly different from our own, imagining futuristic societies flung out far across the galaxy, or worlds so near to ours they feel as if we could reach out and touch them, separated only by a novel invention or social structure that makes it unlike our world. With so many science fiction films that focus on male characters, it can be especially meaningful to watch a sci-fi movie that centers on women or where a female character is the most vital to the story. As we celebrate Women’s History Month in March of this year, here are 20 of the best sci-fi movies to watch with women in leading roles.

Related article: A Tribute to Sofia Coppola: The First and Only Woman to Win an Oscar for Best Director

As we celebrate Women’s History Month in March of this year, here are 20 of the best female-led science fiction movies to watch.

This pioneering German expressionist silent film is one of the first feature-length science fiction movies ever made. It’s remembered for its innovation in the science fiction genre and depiction of class struggle in a futuristic urban dystopia.

In this classic action-horror film, Sigourney Weaver stars as Ripley, a smart and badass crew member aboard the spaceship Nostromo. Ripley and the crew fight for their lives when a deadly alien gets onboard and starts killing people.

The first film in ‘The Matrix’ trilogy follows hacker Neo (Keanu Reeves) as he discovers that life is a simulation called the Matrix created by machines feeding off the energy of human bodies. With the help of Morpheus (Laurence Fishburne) and Trinity (Carrie-Anne Moss), Neo learns to fight back within the Matrix and work toward freeing humanity from the machines.

‘Serenity’ is the follow-up story to the short-lived space-Western series ‘Firefly’ (2002). It depicts the crew of a Firefly-class starship called Serenity as they try to evade government agents out to capture one of their shipmates. The film’s themes of individual liberty and the essential importance of choice in what makes us human are as memorable as the trademark quippy dialogue and epic action scenes.

Based on the novel by P. D. James, ‘Children of Men’ depicts a dystopian near-future in which human infertility is causing society to fall apart. When Theo (Clive Owen) discovers a woman named Kee (Clare-Hope Ashitey) who is miraculously pregnant, he embarks on a perilous journey to take her to a safe haven.

In the near future, an international crew of astronauts aboard the spaceship Icarus II journeys toward the dying Sun, planning to launch a bomb into it in order to reignite the star and save the human race. The film boasts rich visuals, thrilling suspense, and great performances from the ensemble cast.

Based on Kazuo Ishiguro’s acclaimed novel, this alternative history film tells the story of three schoolmates—Kathy (Carey Mulligan), Tommy (Andrew Garfield), and Ruth (Keira Knightley)—as they navigate the trials and tribulations of friendship, romance, and growing up. The film’s themes of mortality, morality, and agency will resonate as deeply as the relationships between the three main characters.

This ensemble cast film, celebrated for its expansive storytelling and exquisite soundtrack, is based on the acclaimed novel by David Mitchell. In six stories linked over hundreds of years by characters who recur through reincarnation, ‘Cloud Atlas’ depicts the universality of humanity throughout changing physical and temporal landscapes.

Mankind is at war with a race of gigantic monsters called Kaiju, which are rising up from a portal at the bottom of the Pacific Ocean. Humanity’s response? Fight the Kaiju with equally gigantic mechas called Jaegers that are controlled by two mentally-linked pilots. Reluctant veteran Jaeger pilot Raleigh (Charlie Hunnam) joins forces with eager rookie Mako (Rinko Kikuchi) to try to end the war once and for all. The epic monster-fighting goodness of ‘Pacific Rim’ is equally matched by its emotional center.

Programmer Caleb (Domhnall Gleeson) is invited by his company’s CEO, Nathan (Oscar Isaac), to administer the Turing test to the humanoid AI Ava (Alicia Vikander). During one session, Ava tells Caleb that Nathan cannot be trusted, and things take a psychologically thrilling turn.

Dust storms and dying crops might spell the end for the human race, but a crew of astronauts embarks on a last-ditch effort to find a viable new world for humankind. This time-bending story of epic proportions is haunting, emotional, and awe-inspiring.

Daisy Ridley stars as Force-sensitive scavenger Rey in the first in the ‘Star Wars’ sequel trilogy. When Rey meets stormtrooper deserter Finn (John Boyega), she gets swept up in the Resistance’s fight to defend the galaxy against the ruthless First Order.

Related article: ‘Star Wars: The Rise of Skywalker’: Let’s Find The Silver Lining And Positivity Amidst The Utter Disappointment & Betrayal That Fans Feel

Based on the short story “Story of Your Life” by Ted Chiang, ‘Arrival’ stars Amy Adams as Louise, a linguist tasked by the military with finding a way to communicate with an alien race that has landed on Earth. The dreamy cinematography and moving depiction of connection and empathy will stay in your mind long after the movie is over.

Felicity Jones stars as Jyn Erso in this prequel to ‘Star Wars: A New Hope’. Although at first a reluctant hero, Jyn teams up with a group of rebels to steal the plans to the Death Star in an effort to help the Alliance prevail over the evil Empire.

In a dystopian society with a strict one-child policy, Noomi Rapace stars as seven identical sisters each named for the days of the week. To survive, the sisters share a single outward identity and only one of them goes out at a time. Then one day Monday doesn’t come home and they must investigate her disappearance without being discovered.

Based on the Nebula Award–winning novel by Jeff VanderMeer, ‘Annihilation’ follows a group of scientists and explorers who investigate a mysterious and expanding area of land called the “Shimmer,” where plants and animals are mutating. The stunning visuals and themes of destruction and transformation will stay with you long after you finish the film.

Brie Larson stars as super-powered fighter pilot Carol Danvers in the first female-led Marvel Studios film. Against the backdrop of intergalactic war and Earth in the ’90s, Captain Marvel’s origin story is epic, emotional, and empowering.

In a post-apocalyptic bunker, a robot called Mother (voiced by Rose Byrne) raises Daughter (Clara Rugaard) as the first step in an attempt to repopulate the Earth. Their bond seems unbreakable until a woman (Hilary Swank) arrives at the compound, casting doubt on everything Daughter knows and believes in.

Related article: A Tribute to Ruth Bader Ginsburg: 32 Facts on Justice of the Supreme Court and Women’s Rights Icon

When Earth’s atmosphere became toxic, most of the human race looked to the stars, settling on a space station near one of Jupiter’s moons, Io. Young scientist Sam (Margaret Qualley) remains, trying to breed a species of bee that can survive the toxic atmosphere. In this understated and beautifully-shot film, Sam forms an unexpected bond with Micah (Anthony Mackie), a traveler who is desperate to get on the last shuttle off of Earth.

This visually stunning thriller follows the parallel lives of two women in the same house, 20 years apart but connected by a phone. Kim Seo-yeon (Park Shin-hye) in the present mourns the loss of her father years earlier. Tormented Oh Young-sook (Jun Jong-seo) in the past plans to save his life. But meddling with time has deadly and devastating consequences for these two women and the people around them.