‘Outside the Wire’: A Futuristic Film About Two Black Soldiers 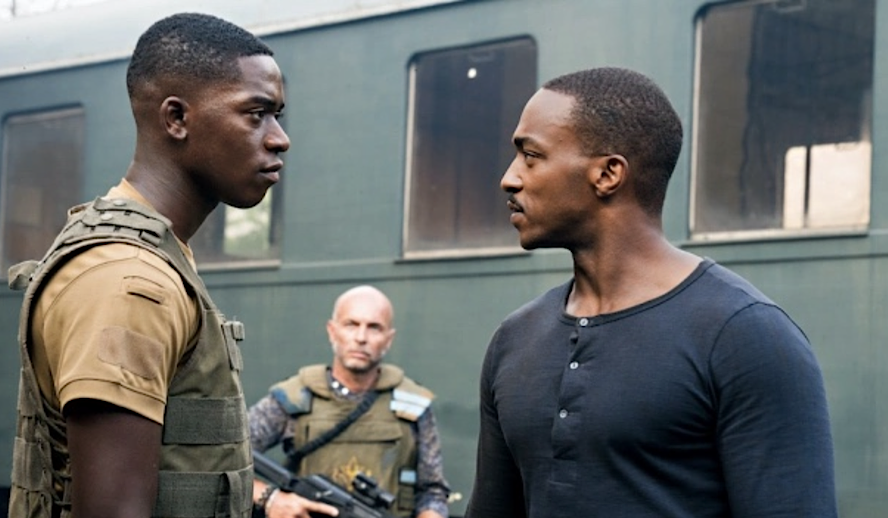 ‘Outside the Wire’, Anthony Mackie’s latest work, is a futuristic action film about saving the world from a nuclear attack. Mackie stars as Captain Leo, an android officer in 2036 who’s suddenly paired up with Damson Idris’s Lt. Thomas Harp (‘Snowfall’, ‘Black Mirror’), a young and scrappy drone pilot. Despite having never met the other, the duo is tasked with the most important mission in the world. Though on paper it may sound cliche, ‘Outside the Wire’ helps reinvent the war genre with new heart and new ways to film action.

As soon as the film starts, we’re thrown into the action. Soldiers dressed in camouflage duck behind cement barricades and rush through the streets from cover to cover. A crescendo of gunfire, cursing, and yelling create our unique score as chaos rains down. Fiery explosions fill the background as soldiers scream at one another and race through the streets.

Opposite this chaos, is the control room where Lt. Thomas Harp sits, piloting his drone. In contrast to the warring soldiers, Lt. Harp seems cool, calm, and collected as he watches everything unfold. As a matter of fact, he even chews on gummy bears as he flies the drone around as if he’s merely playing a video game and it’s not a life or death scenario. The film expertly cuts us back and forth between the two realities, the small room where Lt. Harp relaxes and the expansive battlefield where the soldiers are fighting. More of Lt. Harp’s character is revealed in the next few minutes when he finally speaks to one of the soldiers, Sergeant Miller (Enzo Cilenti). When he does speak, his words are cool and calculated, and he has a callousness about others dying. His seeming lack of emotions is a high contrast to Sgt. Miller’s shaky voice and insistence on not leaving anyone behind. Not even five minutes have passed, but director Mikael Håfström has already given a firm understanding of Lt. Harp and his character.

Oppositely, we’re introduced to Captain Leo as “the other” before we even meet him. One of the first things spoken someone says about him is how he’s not like the other soldiers, not like the other humans. It creates a unique irony, Lt. Harp is a human lacking in humanlike compassion and is tasked with learning from Captain Leo an android (seemingly) void of human feelings. Already we have formed our opinions on our protagonists and the rest of the film seeks to change our opinions about them.

‘Outside the Wire’ – Futuristic Filmmaking

There’s no mistaking ‘Outside the Wire’ as anything but a 21st-century film, specifically a product of the late 2010s because of the way it’s shot. Michael Bonvillain’s (‘Westworld’ (2016), ‘Zombieland’ (2009)) impact is clear, especially because of what his previous work has been. Take ‘Westworld’ for example, a series about a futuristic, robot amusement park and its inhabitants. ‘Westworld’ was unlike anything anyone had ever seen and combined promising ideas for the future (robots) with the fear of what might happen if they become sentient. Bonvillain is known for pushing the envelope cinematically, so it’s no surprise he has come up with new ways to showcase action during a battle.

In the first battle in ‘Outside the Wire’, one of the first shots we see is overhead from a drone over the gigantic battlefield. The battlefield is riddled with overturned, smoking cars and bodies and we are given all of this information in a long, panning shot. This omniscient point of view is quickly cut to a full body shot of a soldier being hit with a bullet and falling to the ground. As fast as that shot came, it disappears and we are soon in the midst of the battle with the camera spinning one way and then back the next. It’s a rapid-fire of different shots and angles that really sum up the chaos of a warzone.

Besides the acting brilliance of Mackie and Idris, Bonvillain’s skills shine and bring this film to another level. It’s clear that his experience as well as his instincts drive the film’s cinematography and enable him to combine film and video games.

While many video games take influences from film – they even often hire screenwriters from Hollywood to write for their games – there are stark differences. Video games are about immersing the player and creating a journey for them. They don’t have to be the best stories and are more about creating the best experiences for players. On the other hand, films are about the stories and strong characters more than anything else. A film doesn’t have to be visually flashy to be critically-acclaimed. Luckily for us, Håfström’s film combines the best of both worlds to create a visually stunning, video game reminiscent movie because of his talented cast and crew.

Along with Bonvillain’s cinematography, Rickard Krantz’s editing helps bring together the elements of a video game with a feature film. For instance, at the beginning of the film, the title card flashes onto the screen for a brief second, distorting our vision of the battlefield and bringing up a pixelated black screen with white writing. The font itself isn’t super cinematic either, it reads more like a “Call of Duty” or “Rainbow Six Siege” video game. Both fall under the first-person shooter category and are games that are available to play on any console. Once the title card appears, the rest of the battle reads exactly like a video game, because we are given the visual cue of the title card. Since our brain has connected the dots between gameplay and film, one medium where we’re in control and the other where we’re merely spectators, it makes us subconsciously connect the two mediums. In one shot, a bullet whizzes into a man’s skull and all we hear is a “zip” sound and see blood splatter. The blood splatter matches up with more of a video game than a realistic movie, further driving in Bonvillain’s technique.

There’s one shot in particular that really hammers in this idea though, where a soldier is running away from the camera and we’re tracking him in a full-body shot. It screams first-person shooter and looks as if we’re just playing in a third-person point-of-view. Bonvillain does these shots so well that it’s as if we can reach out and take control of the characters we see in this film.

‘Outside the Wire’ shines because of its visuals and the acting skills of Mackie and Idris, both a joy to see interact. Underneath the action and humorous dialogue, it’s a well-made film about becoming human and learning to connect despite being different.