Timothee Chalamet & Robert Pattinson Starrer ‘The King’: A King Has No Friends – Defined By Silence And Color 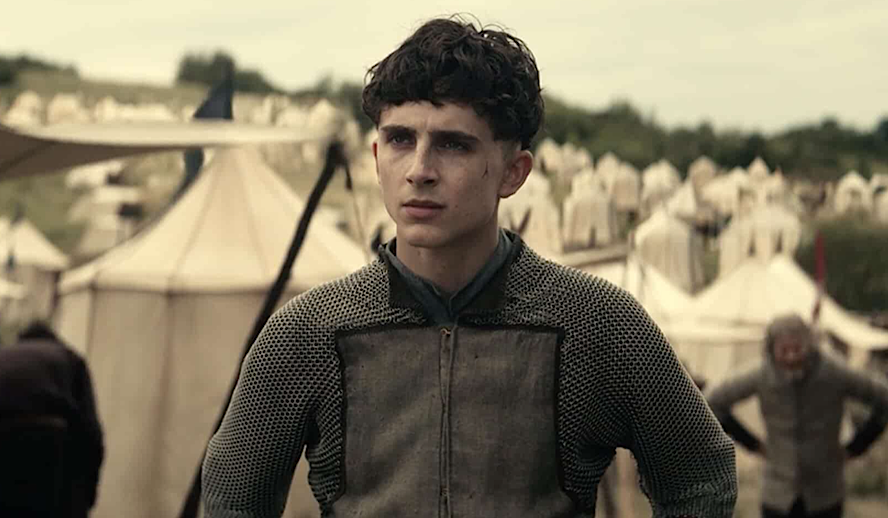 “You Expect of Me a Speech?”

Most of the memoirs from people who have met people of power – like various presidents, dictators, commanders, or even high priests – almost always mention how silent the environment around those people always is. Soviet dictators famously built their cabinets to absorb as much acoustics as possible and the same tendency repeats itself from the marble chambers of the Pope to the velvet-cushioned halls of Buckingham Palace or Versailles. And, if this relationship of power and silence has survived the industrial, media-influenced 20th century, it’s easily imaginable what a part silence has played in the palette of sounds of a medieval king’s court.

If you could name all the aspects that distinguish David Michod’s “The King” from the long list of medieval movies, the prolific use of silence definitely should come as one of the first factors that makes it stand out. It would be really hard to name a film of the same genre that is so comfortable with silence and where pauses so often mean more than the actual dialogue that fills them. From the first scene to the last, the environment where “The King” takes place is silent, but almost never quiet. The venomous tension of the king’s court and its selfish characters is only amplified by the absence of witty dialogue, brisk scene changes, and music-driven editing – it’s often hard to say whether Nicholas Britell’s grim, haunting theme serves to relieve the tension of the pause or to intensify it.

“You expect of me a speech?” – Hal asks the men who are willing to die for him in the next hour. Indeed, the film is way more about things that are implied or meant. In the grim world of egocentric megalomaniacs who are ferociously defending every inch of their own interests and care about nothing but adding more to them, every serious message is implied, not said, as every character has to bow under the iron will of the throne and thus has to resort to hypocrisy and manipulation to gain control. The ball gift as an implied parody on Hal’s immaturity instigates an actual war, which is fueled by the selfish interests of the very people Hal considers as loyal – at least to England, if not to him. But just like in every entourage gathered around power, every soul around Hal is manipulative and deceptive and does not break that character unless cornered, as the silence is too omnipresent to hope that even flashing one’s real face and intentions for a second might go unnoticed and unpunished.

‘The King’: “I shall keep this gift. This one is sent only for me. For the boy I once was”

One of the main themes of “The King” is coming of age. However, this transition from childhood to maturity is not sought after, but forced. Hal becomes King Henry V against his will, but that is only the least of what he has to succumb to. The first time we see Hal, he is already damaged by the world he tries to rule and rebel against at the same time – a natural dilemma for a still-young boy surrounded by incomprehensible greed, animus, and treachery of adults. But we witness a certain journey before he arguably descends more into the role of this Machiavellian Monarch everyone expects him to be, and this journey is magnificently captured and painted by the camera of Adam Arkapaw, who already got a 2015 ASC spotlight award for filming Shakespeare’s Macbeth and also was the cinematographer of the 2016 Assassin’s Creed movie.

The gloomy, dim world of medieval England and its court that we see on the scene [GK1] is unparalleled in its depiction of reality. If there is one color that is the essence of the film, it’s grey or dark grey. The camera almost drinks the silent tension and suspense on the scene and thus gradually drains the life out of every shot as we see Hal go deeper and deeper in his depression and loneliness. The last part of the film, where we see an already victorious Henry, might seem painted with a palette of shadows instead of colors – which serves not just the purpose of the realistic depiction of a badly-lit period of time and its visual gloominess but also reminds us of the shadows under which the characters are, and from which they try to escape – like the shadow of Hal’s tyrant, warmonger father, against which he desperately tries to prevail. That struggle is so intense that he even tries to identify the same demons within his enemy – the French dauphin, played by Robert Pattinson, who is also under the shadow of his father but, unlike Hal, stays immature and thus hurries his tragicomic end.

Another stand-out aspect of “The King” is how fast personal transitions happen and how fast characters change in response to the events that take place. That definitely is a luxury that only such a brilliant cast of talent could make possible. The main star of the film, Timothee Chalamet, who changes from a drunkard knight to a phlegmatic monarch as fast as the distorted reality of those wild times where men seldom reached 40 would require, masterfully brings historical duality to the Henry V character with his non-masculine, yet intimidating presence, untraditional (another way to say ground-breaking) for the films of this genre. The combination of the teenage-angst-loaded gaze and half-dead (really trying not to say Tony-Soprano-esque) stare of someone in power really does not leave much space for critique.

“War is bloody and soulless”

Another aspect of “The King” that deserves praise is the battle scenes. Here again, the magic of Adam Arkapaw’s grim cinematography excels in painting a picture of what war could feel and look like in those times. The randomness of war – no type of character, no matter how skilled or decorated a warrior, is protected from a random arrow, rock, or attack. In the end, it’s all about numbers, tactics, discipline, and the training of the whole unit and individuals can’t change much. No “finishing moves” like exceptional sword mastery and flashy footwork. Instead, mostly power-oriented simple cleaves and thrust attacks, where one mistake or weak block will be fatal, accompanied by a lot of dirty fighting.

And through those dirty battle scenes is where we really understand that Hal’s pacifism is a choice of principle, not a weakness, as we see another masterful transition of a young boy to a ruthless killer, numerously baptized in the bloody mud of various battlefields and once again covered with it in Agincourt. This main battle scene, which can’t be helped to be compared to the infamous “Battle of the Bastards” scene from the Game of Thrones for its breath-taking choreography, makes us understand better what is meant in Hal’s pre-battle speech: “England is the space between you. Fight not for yourselves, fight for that space. Fill that space. Make it tissue. Make it mass. Make it impenetrable! Make it yours! Make it England!” – only after being immersed in the choking reality of the battlefield do the viewers understand how less of a speech and more of a bit of life-saving advice from an experienced warrior, who knows too well what’s coming, that was.

The genius of Shakespeare to write about universal themes that can be interpreted through any medium in any century has been proven through film so many times that the bar for bringing this version of Henriad (upon which the film is loosely based) to the screen was already pretty high. “The King” passes that bar with flying colors (well, quite on the contrary, actually) and establishes its own standard of wonderful acting, exceptional cinematography, and chilling audio work, which all culminate in the realistic depiction of that grim period of iron, blood, and tears.