The Quietly Superb ‘Dark Matter’: Blast Off With the Crew of the Raza for Quarantine Sci-Fi Escapism 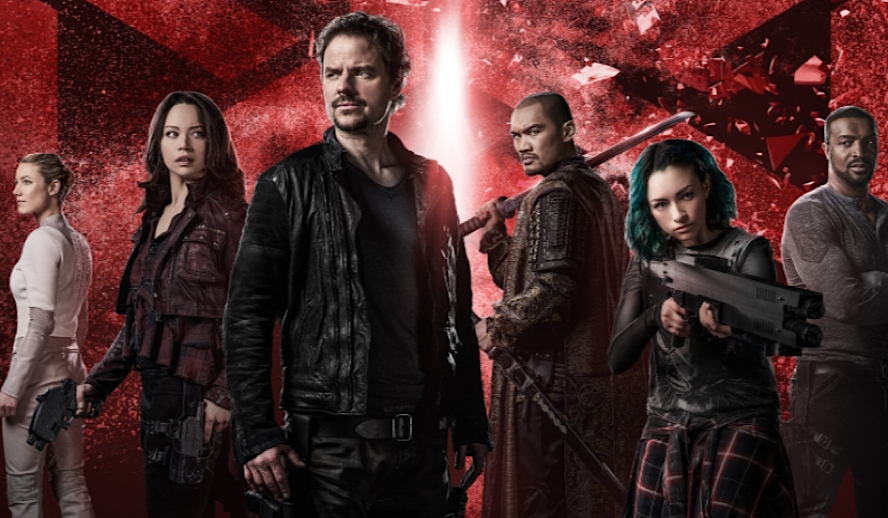 Syfy’s Canadian science-fiction series ‘Dark Matter’ is everything to love about a pulpy space opera: a ragtag group of space pirates, heists that inevitably turn into blaster or sword battles (yes, swords!), an endearing and increasingly human-like android, and a doozy of a mystery. When six people and an android aboard the starship Raza awaken from stasis to find their ship on critical life support, they realize none of them have any memory of who they are—or were. Someone on the ship tampered with their memories, but who, and why?

As they navigate the hostile universe around them, ruled by greedy and ruthless corporations and policed by the looming Galactic Authority, the Raza crew slowly learn more about their identities, and most don’t like what they find. The crew forms a found family as they fight against their enemies, a possible traitor among them, and the threat of reverting to their pre-memory wiped selves. The three-season series was created by Joseph Mallozzi and Paul Mullie, best known as writers and producers of the many ‘Stargate’ series. ‘Dark Matter’ is based on a four-issue comic book of the same name, published by Dark Horse Comics and created by Mallozzi and Mullie to spark interest in the concept of the TV series. Although ‘Dark Matter’ ended in 2017, here’s why it’s worth streaming all three seasons, on Netflix now.

‘Dark Matter’ – Meet the Crew, It’s Their First Meeting, Too

Since none of the crew know who they are, they name themselves after the order in which they awoke: One (Marc Bendavid), the noble upstander; Two (Melissa O’Neil), the natural leader and a deadly fighter; Three (Anthony Lemke), the roguish, gun-loving dissenter; Four (Alex Mallari Jr.), the strong, silent type and master swordsman; Five (Jodelle Ferland), the bright-eyed techie with mysterious dreams of the crew’s memories; Six (Roger Cross), the level-headed pilot; and the Android (Zoie Palmer). Luckily, they begin to discover they’re a capable group, revealing muscle memory or keen comprehension of abilities like sharpshooting, gambling, and building gadgets.

The Android, who is an incredible fighter, has a neural link to the ship, and she acts as a liaison between the Raza and the crew. A delightful part of the show is seeing how the Android’s personality becomes more distinct through interacting with her shipmates. As the series progresses, a few more rogues are added to the gallery, including quick-on-her-feet fighter Nyx (Melanie Liburd) and medic Devon (Shaun Sipos). The crew members don’t trust one another at first, but they soon realize they’re better off protecting each other while they figure out what happened to their memories. Things get even more complicated when they discover they also don’t know who they can trust outside the ship and must hide the fact that they’ve lost their memories.

This is especially true when dealing with their supposed known associates and enemies, creating a thrilling poker game between the crew and the people they encounter. This tricky subterfuge is reminiscent of the first few episodes of ‘Orphan Black’, when Sarah is trying to navigate Beth’s life after assuming her identity and is figuring out who to con and who to trust, and it fuels the central mystery in ‘Dark Matter’. It’s worth noting that while the characters in ‘Dark Matter’ may at first lean heavily on familiar archetypes, it’s necessary for the beginning when they don’t know who they are. As their pasts are revealed and their relationships with each other are developed, they gain greater nuance. Solid performances by each of the main cast members—Two (O’Neil), Three (Lemke), and the Android (Palmer), in particular—provide compelling reasons to stick with the show even before the characters fully learn about who they are.

If You Liked ‘Firefly’, You’ll Like This Sleeker Take on “Thieves with Hearts of Gold”

Although there are scarce brown coats and more neon lights, this show often gets compared to the short-lived but widely-beloved ‘Firefly’ and the parallels are clear. There’s the scrappy and capable outlaw crew, the ship that’s frequently in need of repairs, and consistently sticking it to the intergalactic police forces and corporations running illegal science experiments. And, of course, Three begins the series as nearly a Jayne carbon copy, complete with naming his guns. Both crews also struggle to strike a balance between making a living off mercenary jobs and fighting the good fight against the corrupt power players in the galaxy.

But the aesthetics of ‘Dark Matter’ lean more toward sleek and vibrant future cities than the dusty Old West landscapes of ‘Firefly’. Exterior shots of planets and space stations in ‘Dark Matter’ are both beautiful and imaginative for the diversity of their design. Yet, when it comes down to it, what would space marauders be without leather jackets and leg holsters for their blasters? Both ‘Firefly’ and ‘Dark Matter’ have their crews covered. And, as if the shows were destined to collide, Melissa O’Neil (Two) and Nathan Fillion (Malcolm Reynolds), the respective captains of the Raza and Malcolm Reynolds’s ship Serenity, are currently co-starring on ABC’s ‘The Rookie’.

Mystery and Family Drama are Explored in Season One

‘Dark Matter’ takes some time getting acclimated to its own premise, being frontloaded with worldbuilding and teasing the mystery surrounding the memory loss and the crew’s pasts. But midway through the first season, it hits its stride. In the beginning, the overarching mystery and plot development are handled better than the individual episode conflicts, though this ultimately isn’t such a big deal when watching the episodes close together on streaming.

The early episodes encounter some issues chiefly because the characters have no memories. It’s a difficulty that ‘Dollhouse’ also faced for its characters in their personality-wiped, “blank slate” state—how do you develop characters that have no background, no lived experiences and no biases that affect their decisions? ‘Dark Matter’ raises questions about the essence of a person, like whether one’s body and memories are crucial to their inherent personality, or if there is a true core of a person when the context of memory, lived experiences, and biases are stripped away.

Expanding the Universe in Seasons Two and Three

In the second and third seasons, the show does a better job at balancing the problem-of-the-week plots with expanding the universe, furthering character development, and building toward the season climax. The Raza crew encounter rival mercenaries, a Galactic Authority Inspector determined to bring them to justice (Kris Holden-Ried), parallel universes, time travel, and even the threat of intergalactic war. Yet through all of these exterior challenges, the show remains faithfully character-driven, which lends an intriguingly serious realism to an otherwise fun space-romp. There’s also something admirable about the way the show learned to swiftly, and at times mercilessly, excise characters or storylines that might overstay their welcome in other shows. It’s refreshing and deeply satisfying.

At its most interesting, ‘Dark Matter’ shows the morally gray areas that occur when these “new” people are faced with the choice of either following in their own footsteps of violent, ruthless behavior and the consequences of their pasts, or choosing to be different, to be better. It may not fully deliver on unspooling the intricacies of the “tabula rasa” question, but it definitely makes good on charismatically portraying this crew in this world: this group of people striving to be better than they were the day before. And at its most entertaining, ‘Dark Matter’ boasts dynamic fight scenes, great visuals, and compelling characters—and it’s just plain fun.

Stream all three seasons of ‘Dark Matter’ on Netflix now.