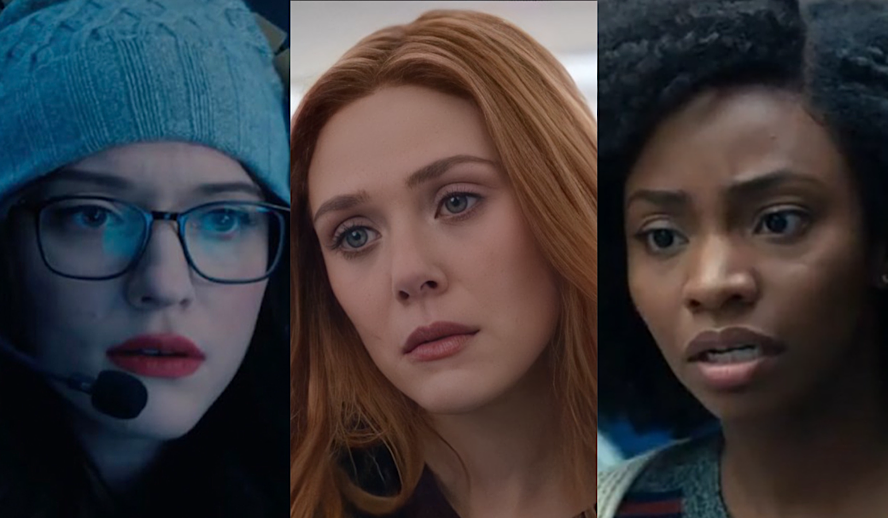 Marvel’s ‘WandaVision’ does something unprecedented in the superhero genre; it caters to the Female Gaze. What is the Female Gaze, you might ask? Well, in general terms, it is the effort to appeal to a female audience. Think how superhero films usually appeal to the Male Gaze – with scantily clad female heroes, whose sexual prowess are highlighted in objectifying, revealing shots. Even female-led films such as Wonder Woman fall victim to this sensibility – with Gal Gadot being the epitome of beauty standards, flawlessly untouched in battle.

Not to excuse Marvel; they’re guilty of this too. Just last year, they were criticized for killing off Scarlett Johansson’s Black Widow, the only original female Avenger, just as she was starting to get a more three-dimensional stake in the Marvel Cinematic Universe (MCU). The superhero genre is defined by its male audience – whether that be through story or aesthetics.

The Female Gaze, in contrast, seeks to humanize rather than objectify. It is confident in its femininity – which is seen as a strength rather than a weakness. What’s more, as documentarian Kirsten Johnson says, “a female-centric gaze is also informed, moved, and provoked by the overwhelmingly male histories of gazing that have long taken up more than their fair share of space.” This is why WandaVision perfectly fits the bill. It’s a hallmark show following a female superhero, but it’s also headed by a predominantly female creative team aware of its male predecessors and ready to subvert expectations. At the same time, ‘WandaVision’ is popular with all audiences, not just women, showing just how powerful the Female Gaze can be.

‘WandaVision’ – Our Protagonist and Anti-hero, Wanda

While audiences have been familiar with Wanda Maximoff for a long time, she only existed as a supporting character in the MCU before ‘WandaVision.’ To summarize her character, Wanda is a superhero with telekinesis, hypnosis, and energy manipulation powers. She first sided with Ultron in ‘Avengers: Age of Ultron’ until finally becoming an Avenger herself. In ‘WandaVision,’ we follow Wanda after the death of Vision, her romantic partner who died in ‘Avengers: Endgame’, as she is set up to be a leading force in Marvel’s upcoming Phase Four.

In the show, Wanda creates an enclosed sitcom world she can exist in with a recreated Vision. Quite simply, this means she is in control of the narrative, manipulating Vision and the rest of the town’s residents. While simply giving Wanda agency and power in her show, this also presents the intriguing possibility of Wanda becoming a future villain in the MCU (after all, she’s keeping hundreds of people hostage). In essence, she is an anti-hero the audience empathizes with, even though she’s doing very bad things. This kind of deep, moral dilemma is something we’ve only seen with male characters in the MCU, so it’s refreshing to see a female character fleshed out in this way. Even still, those male characters were never presented as straight-out antagonists like Wanda is, but were rather just criticized for their unethical, perhaps extreme views (think the ethical debate in ‘Captain America: Civil War’).

The show is primarily driven by Wanda’s grief over Vision’s death and explores traditionally feminine themes such as romantic relationships and motherhood. Wanda’s entire want is to love and be loved by Vision, but this desire isn’t faulted or looked down upon. Instead of making her weak, her powers grow from the grief and trauma, shaping her into an unstoppable force. In short, the show provides a great statement: that women broken down by trauma don’t need to be defined by it, and that love is not a “weak” thing to have. In fact, Kevin Feige himself declared Wanda to be the strongest hero in the MCU.

The show is also helmed by Elizabeth Olsen, who excels as its commanding, leading lady. In addition to making Wanda an empowering, dangerous woman, the show makes simple fixes as well – such as granting Olsen’s wish of having Wanda show less cleavage in her costumes. All in all, Wanda exists as a strong, intellectual, and dangerous character emboldened by her want of traditionally feminist things – like a long-lasting love and family.

Monica Rambeau: A New Superhero in the Making

Monica Rambeau is also a prominent female character in the ‘WandaVision,’ characterized by her determination to fix the Hex (Wanda’s sitcom world) while sparing Wanda’s life, whatever the cost. Her character first appeared in ‘Captain Marvel’ as a young child and is a S.W.O.R.D. agent in ‘WandaVision’ as an adult. She is played by talented Teyonah Parris.

Monica was a victim of the infamous Blip, meaning she ceased to exist for five years until the Avengers defeated Thanos and brought the deceased back. In that time, her mother passed away from cancer, something Monica only learned of when she came back. This means she is also a victim of grief; but like Wanda, that grief does not weaken her, but pushes her to delve deeper into her work and passion. This is another refusal on the ‘WandaVision’ creative team’s part to not allow women to be defined by, or pitied for, their grief.

Though she is a career woman through and through, Monica has a level of empathy that allows her to critically think about how to solve issues, rather than approaching them with brute force. While characters like Hayward use their authority to make damning decisions, it’s clear that they are making mistakes; Monica actually knows more about the situation than anyone else, having been stuck in the Hex firsthand. This intelligence is nicely complimented with Monica’s visceral sense of bravery, which she fearlessly adopts as the series progresses. Her arc ultimately culminates in a powerful moment where she forces her way into the Hex, adopting superhero powers of her own.

Lastly, the show is punctuated by Kathryn Hanh’s character, who first appears in the series as nosy neighbor Agnes, but is revealed to be Agatha Harkness, a witch who messes with Wanda’s perfect fantasy after becoming intrigued with her power. Agatha is one of few MCU female villains, following in the steps of Hella from ‘Thor: Ragnarok’ and Ghost from ‘Ant-Man and the Wasp’. In Episode 8, it was revealed that Agatha is a witch from the Salem Witch Trials era who was shunned by her coven for using dark magic. This in itself introduces an exciting venture in the MCU, with the Witch genre being one generally filled with independent, unconventional female characters.

Related article: MCU Is About to Get Sassier: Everything We Know About ‘Deadpool 3’ Addition Into Marvel Cinematic Universe

From the show’s Pilot, fans have long speculated about Agnes’ role in the story. In Episode 7, she was finally revealed to be Agatha Harkness in a viral musical number “Agatha All Along”, a villainous reveal that enthralled audiences. It wasn’t that fans were surprised she was more than comedic relief; it was an obsession with the utter coolness of her new persona. In a genre where female villains are often held up to a higher standard than their male counterparts, this positive viral reaction signals a great success for the show. But even with all the hype, Agatha’s character is still one largely explored. Further details are sure to be revealed in this week’s ‘WandaVision’ finale, streaming on Disney+ March 5th.

These thoughts really only break the surface of how ‘WandaVision’ celebrates the female gaze and subverts superhero genre sensibilities. As Elizabeth Olsen said in a Variety interview, “I don’t want to take away from any of the men on our show, but we did have this feminine energy of just large collaboration, large teamwork, lots of dialogue, lots of open communication… which I think, generally speaking, one would say is more feminine than masculine.” Ultimately, ‘WandaVision’ serves as an exciting beginning to Marvel’s new era, which will undoubtedly be helmed by powerful women.