‘Alien Worlds’: One of Netflix’s Best Nature Documentaries of the Year Isn’t Even Set on our Planet 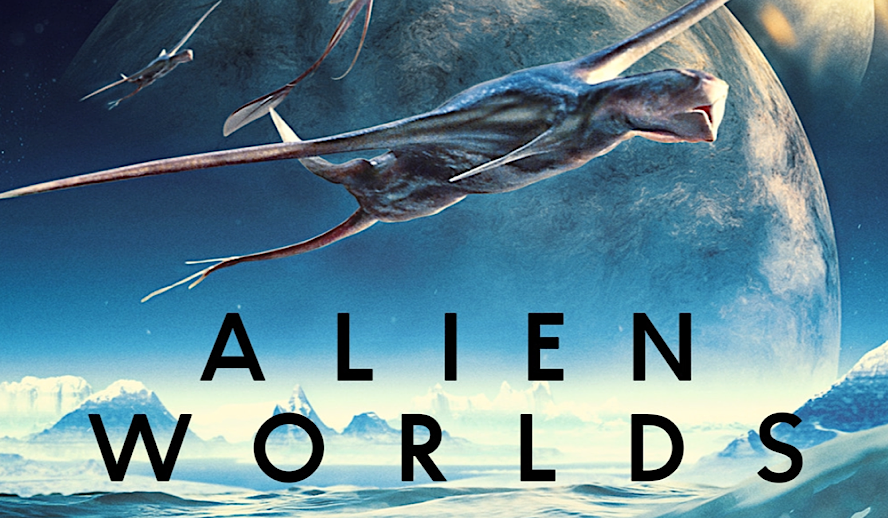 When we conjure up images of life on other planets, we have a host of sources to draw from. Perhaps we think of the little green men parodied in Paul, or the prawns from District 9, or the oddities that made us laugh in Tim Burton’s Mars Attacks! We’ve seen aliens depicted as allies (Arrival, E.T. the Extra-Terrestrial), aggressors (Independence Day, War of the Worlds), or something completely beyond our comprehension (Annihilation).

As fun as these are to entertain, Netflix’s new documentary miniseries paints a more realistic, but no less intriguing, portrait of potential alien life. Rooted in fact and scientific speculation, each of the four episodes focuses on a different planet beyond our solar system, and the type of life that may exist there. Combining stunning visuals with fascinating interviews, Alien Worlds varies little from other spectacular Netflix nature outings such as Our Planet or Night on Earth in terms of style and quality despite its core subject matter being entirely theoretical.

Related article: ‘A Life on Our Planet’: By David Attenborough – A Reprise on Regenerating Earth’s Biodiversity

For a show centered on aliens, a surprising amount of the runtime is spent on our green and blue ball of a home. The show will sweep you around the planet from the Danakil Depression in Ethiopia, to the impact crater in the Yucatán Peninsula, to the Cueva de Villa Luz in Mexico. Each of these locations (which appear almost more alien than the carefully painted digital landscapes) serve as jumping points for the planets Atlas, Janus, and Eden. Earthly creatures such as mayflies, ants, and hummingbirds form the basis for the series’ fantastical six-winged sky-grazers, blob-like predators, and the particularly charming ten-eyed pentapods.

The series treats the aliens, meticulously crafted from computer-generated imagery, no differently than David Attenborough would treat any resident of the jungle, desert, or ocean. Each alien creature and their environment mirrors nature as we know it, right down to the obligatory death of newborns and shots of predator versus prey, presented to tug at our heartstrings. Nature can be brutal, after all, no matter what planet you’re living on.

This isn’t to say that you’ll end up tuning in to a high school biology class. The show strikes the right educational chords while never talking down to or losing its audience. The show engages experts in a wide variety of fields, going beyond the obvious choices of astrophysicists, ecologists, and marine biologists and adding flavor with the addition of a master falconer, a professional paraglider, and a hunter-gatherer from an East African tribe. At no point are any of these experts sitting and talking to the camera; they are constantly doing, their testimonies accompanied by cinematic action.

The cerebral, other-worldly images will linger with the viewer long after the credits are rolling and Netflix is recommending season four of Big Mouth. While learning about the life of fungi doesn’t sound like entertainment, Alien Worlds delights the eyes with every frame. Whether it’s a map made of light, a tropical planet that has swapped green for red, or a cute baby Timone, you will be drawn in by this visual masterpiece. So much so, you won’t even notice how much you’ve learned until you pull the term ‘snottite’ out of your hat at your next Zoom party.

Ok, But What About the Real Aliens?

Pentapods and killer blobs are all very well, but what about intelligent life? What might they look like? That is if they even exist in that vast expanse of void.

The series certainly leans towards the affirmative. As astrophysicist Adam Frank states, “I do believe there is other life in the universe. And as a scientist, I’m taken to that belief because I really believe that’s where the numbers now are leading us.” And how many planets in the universe do the numbers say could hold an alien civilization? 10 billion trillions. Including a potential society of brains in jars.

The final episode lands on a planet named Terra, whose intelligent inhabitants have evolved past the need for physical bodies and now exist as a collective hive mind maintained by robots. This may sound more like the premise of a Philip K. Dick novel than the subject of a nature documentary, but the series anchors their finale’s premise by continuing to root these speculations in fact. After spending time with the nine-brained octopus (another fun fact for that Zoom party), a NASA astronaut, and a Star Wars-looking power grid in the Sahara desert, the idea that civilization would exist as Matrix-style, robot-maintained brains in boxes no longer seems quite as far-fetched.

Hope for a Doomed Planet

These days, it seems every news story that is not about a global pandemic or changes in government is about the race to become carbon-neutral by 2050. With the increasing popularity of zero-waste and vegan movements, the gathering force of the Extinction Rebellion, and the growing celebrity of Greta Thunberg, it would appear that the world is finally waking up to the true calamity that climate change could bring. While documentaries like 2040 highlight how we can prevent the dark fate we’ve created for ourselves, Alien Worlds offers another solution; colonization.

The series isn’t subtle about this message. The theoretical intelligent race of Terra is shown turning a once lush paradise barren with their excessive consumption of power. Their race only survives by using technology to make other planets suitable for habitation. It’s far from a happily ever after, with astronaut Michael Foale stating that perhaps one in a hundred spaceships would make it to their final destination. Still, that is a marked improvement over extinction, and the series as a whole presses the themes of life as miraculous and not to be wasted or taken for granted.

If Alien Worlds could be summed up in four words, they would be “life finds a way.” Whether you’re a science-fiction enthusiast, looking to switch up your usual comedy or drama entertainment, or have always been partial to the nature documentary format, you will find this Netflix mini-series three hours well-spent. All four episodes are a combination of dedicated research combined with spectacular visuals with an underlying message of cautious hope for humanity’s future.

‘Alien Worlds’ is now available to view on Netflix.