The Rise of Matthew McConaughey: A Tribute to the Powerful Thespian & Superstar Leading Man 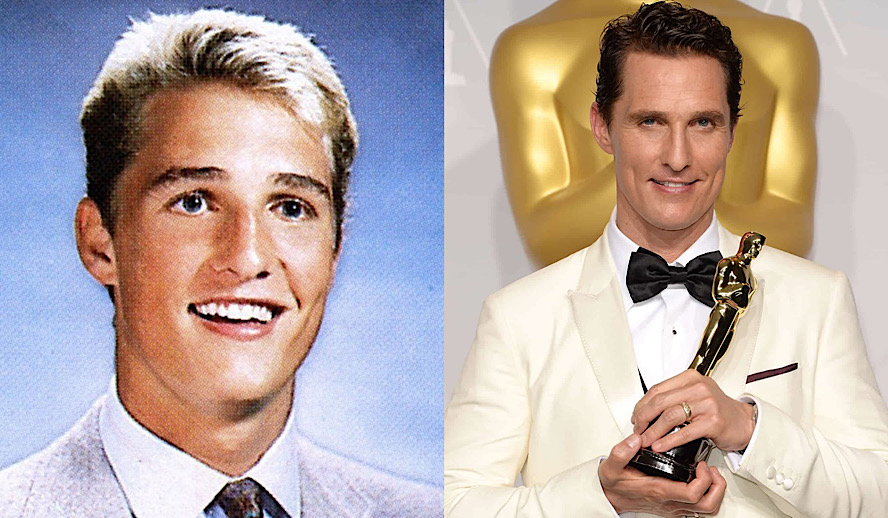 Most people are familiar with Matthew McConaughey and his films. He’s won an Academy Award and a Golden Globe in addition to being nominated for an additional Golden Globe and two Emmys. McConaughey has been in the industry for three decades, but he didn’t grow up thinking he’d become an actor. In an interview with the SAG-ATRA foundation, McConaughey describes attending the University of Texas with an eye on becoming a lawyer. A timely intervention of encouragement from a friend, S.R. Bindler, and coming across the book The Greatest Salesman in the World, inspired McConaughey toward film school.

While in film school, McConaughey landed a few commercials and his debut in film with Dazed and Confused. He learned about the film while he was at a bar. The bartender pointed over and told him that the guy at the end of the bar was a producer for a movie filming in town. McConaughey went over and introduced himself to casting director Don Phillips. That introduction led to a role in the film as the partying city worker Wooderson.

After McConaughey graduated, he planned to head out to Los Angeles to work as a PA on a Coen Brothers film. The day before he hit the road, he got called in for a small role in Texas Chainsaw Massacre: The Next Generation. At the end of the audition, McConaughey was asked if he knew anyone who would be suitable for the killer role. He gave a few names and went to his car before turning around and going back in to ask to read for the part. He got it.

Los Angeles and a Big Break for Matthew McConaughey

Once Texas Chainsaw Massacre wrapped, McConaughey finally got on the road and made it out to Los Angeles. While he initially planned to PA for a Coen Brothers film, those plans never came to fruition. The movie got pushed back, and McConaughey launched his acting career. There were a few minor roles before his big break, and they were significant because they gave him a paycheck to allow moving forward with acting. McConaughey’s first few calls in Los Angeles started with one for Herbert Ross’s Boys on the Side, and he landed his part in Angels in the Outfield walking in the door to his audition.

Every Matthew McConaughey Roles and Performances from 1992-2020

A few movies later, McConaughey was working on filming Lone Star when he got the call to audition for Joel Schumacher’s A Time to Kill. Initially, he auditioned for the part played by Kiefer Sutherland but spoke up during his audition to Schumacher, letting the director know he’d be good for the lead. Schumacher gave McConaughey a screen test for the part of Jake Brigance. A few things happened that helped paved the way for McConaughey to get the part, including Sandra Bullock signing on, which gave wiggle room for casting an unknown for the male lead. The stars aligned, and McConaughey got a call from Schumacher and John Grisham offering him the job. This was a big success for McConaughey. It took him out of anonymity. He was now a Hollywood leading man.

Establishing a Career and the McConaissance

After the success of A Time to Kill, McConaughey took a one month trip to South America and got out of the limelight. Upon returning, his next big films were Steven Spielberg’s Amistad and Robert Zemeckis’s Contact. Both were personally important roles for McConaughey and grand movies with important messages and meaning. He teamed up with Dazed and Confused director Richard Linklater again for The Newton Boys before finding himself in one of the first true comedic leads of his career in Edtv.

For the next decade, McConaughey starred in a lot of Romantic Comedy films. The Wedding Planner, How to Lose a Guy in 10 Days, and Failure to Launch are some of the standouts during that period. That doesn’t mean McConaughey wasn’t acting in other genres at the time, but he was starting to get typecast. This led to McConaughey taking a little break from acting to “recalibrate his relationship with his career.” He took two years off. The first year, McConaughey describes rejecting parts he felt too comfortable in. A year passed where he didn’t get any offers before new roles started to come his way.

The Lincoln Lawyer, Killer Joe, Mud, and Magic Mike were noticeably different for McConaughey and were building up to the “McConaissance.” Dallas Buyers Club was the crown jewel that established McConaughey as an A-list force in the industry. He won an Oscar and a Golden Globe for his performance as Ron Woodroof in the film.

McConaughey had many great films come out around this time. The Wolf of Wall Street, directed by Martin Scorsese, and Interstellar, directed by Christopher Nolan, are two that stand out on his resume. In addition to the films he starred in during this period, HBO’s True Detective earned him two Emmy nominations and a Golden Globe nomination. The run of brilliant performances cemented McConaughey as one of the top leading men in Hollywood. His latest showing in Guy Ritchie’s The Gentlemen shows that there is much more to explore and much more to come.

In his passionate acceptance speech at the Oscars, McConaughey touches on three things he needs each day. One of them is being someone to chase. That person he pursues is his hero, who is himself in ten years. This sentiment of always looking forward to being the best you can be is evident in his career. McConaughey has graced audiences with many classic films and many heartwarming ones as well. You can take a look at his filmography and be sure to connect with at least one. To delve further into McConaughey’s history and philosophies, check out his recently published memoir, Green Lights. It is well worth reading.