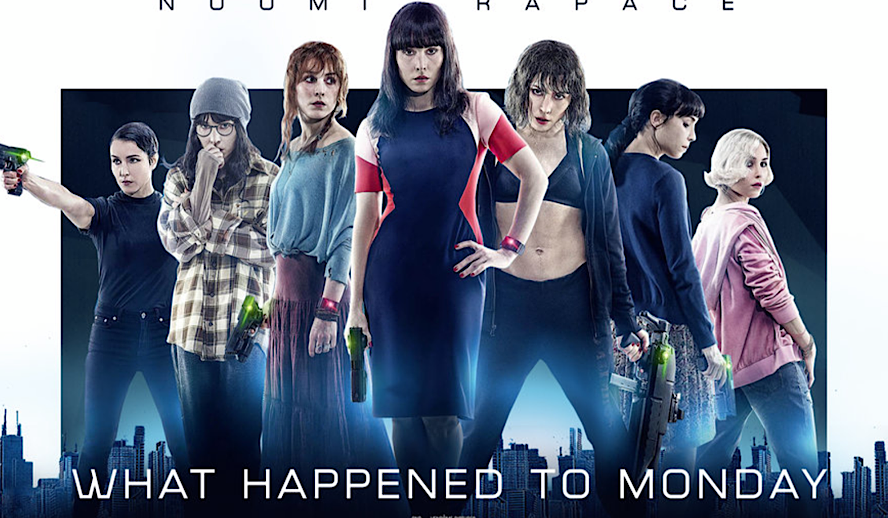 Photo: ‘What Happened to Monday’/Netflix

In a dystopian near-future with a strict one-child policy, six septuplets who share one outward identity investigate the disappearance of their missing seventh sister, all while hiding from the government and powerful people who would kill them if their existence was discovered. ‘What Happened to Monday’ (2017) depicts a world where overpopulation created a food shortage, which was combated with genetically modified food that fixed the hunger problem but ironically increased the rate of multiple births, and overpopulation is now once again the greatest threat to human existence. The government has gone full Big Brother by using electronic bracelets to track its citizens around an unnamed European city, and the looming Child Allocation Bureau rounds up extra siblings and puts them in cryosleep until there are enough resources to accommodate everyone in a seemingly distant future.

Noomi Rapace stars at the seven Settman sisters, each named for the days of the week and who take turns wearing the mantle of high-powered banker Karen Settman. Though Karen is crisply cohesive, the sisters’ true personalities run the gamut. From rebellious Thursday to introverted tech-genius Friday to blonde party girl Saturday, each of the Settman sisters is unique in the safety and confines of their shared home. ‘What Happened to Monday’ juggles nearly as many different genres as there are Settmans, combining dystopian sci-fi with government conspiracy, action thriller, and mystery. Willem Dafoe plays the sisters’ grandfather Terrence Settman, who hides and raises the young Settman girls (portrayed by Clara Read), training them to survive together in a world hostile to them simply because they are siblings. When Monday doesn’t come home one night, the sisters must figure out what happened to her without being caught by the Child Allocation Bureau.

With an actor playing seven women whose faces look exactly alike, there are inevitable comparisons to be made to the BBC America series ‘Orphan Black’, starring Tatiana Maslany as a number of genetically identical clones. Being a film, ‘What Happened to Monday’ doesn’t have the breadth to fully flesh out each of the Settman sisters like the clones in ‘Orphan Black’, but in the limited amount of time, Rapace does a great job at individualizing the personality and physicality of each of the sisters. One of the most delightful parts of watching ‘Orphan Black’ is seeing the clones portray each other in “clone swaps” and there is a taste of that in ‘What Happened to Monday’, as each of the sisters must alternately portray the singular identity of Karen Settman. While the film doesn’t delve as deeply into the themes of individuality and identity as ‘Orphan Black’, it still raises interesting questions about the right to survive and navigating the morality of a world in crisis.

The premise of ‘What Happened to Monday’ is like an inverse of ‘Children of Men’. As opposed to a world without children threatening the longevity of the human race, the high rate of multiple births in ‘What Happened to Monday’ leads to the planet’s dire overpopulation problem. The film is at times just about as bleak as ‘Children of Men’ as a polished Karen Settman (no matter which sister) strides down rainy streets lined with austere concrete buildings and segmented by guarded checkpoints. In fact, director Tommy Wirkola was inspired by ‘Children of Men’, as well as the sci-fi films ‘Looper’ and ‘Blade Runner’. “Those films were the main inspiration because we wanted to create—not a glossy, perfect, neat super-futuristic future—but this gritty, overpopulated, troubled one filled with garbage,” Wirkola said in an interview with The Hollywood Reporter. “So those films, with good realism to them and the world-building, were especially inspiring.”

Rapace gets to show off her action chops in the film, fighting Child Allocation Bureau goons in a variety of fight scenes with guns, fists, and the nearest household item. Wirkola doesn’t hold back on the violence, and a few scenes with severed body parts are stomach-churning. The film’s action scenes nicely blend into the thriller and mystery elements, as Monday’s disappearance, and the decision to send Tuesday out as Karen while Monday is still unaccounted for, ramps up the tension as much as when the Bureau agents come gunning for the Settmans.

Glenn Close plays shrewd Nicolette Cayman, the head of the Child Allocation Bureau, who takes it as a personal affront that the seven Settman sisters have survived into adulthood under the Bureau’s nose and makes it her mission to eliminate them. The larger stakes of this dystopian society are revealed through Cayman’s parliamentary campaign and plans to further the one-child policy by restricting who would be allowed to bear children. In the lead-up to the showdown against Cayman, there are some well-executed twists, along with a cat-and-mouse game between her and the Settmans.

When ‘What Happened to Monday’ first premiered, it was met with middling and even poor reviews. Some critics lamented its over-reliance on the “multiple Noomi Rapaces” gimmick without fully examining its promising premise. Others noted the movie’s thinly characterized antagonists. Cayman is indeed cartoonish and underdeveloped as dystopian film villains go. The character’s effectiveness falls below Tilda Swinton’s Minister Mason in ‘Snowpiercer’ but is perhaps on par with Kate Winslet’s Jeanine Matthews in the ‘Divergent’ series. Even so, Close gets the job done and is adequately chilling in her final monologue of the film.

Despite some flaws, ‘What Happened to Monday’ is an engaging and thought-provoking movie. Rapace’s performances in her seven roles are nuanced—whenever something bad happens to any of the sisters, it’s deeply felt. Even in such a bleak world, there are some genuinely humorous moments and lovely scenes of sisterhood that stand out especially because sibling relationships are all but nonexistent. The brutal action sequences are exhilarating to watch, and the central mystery of what happened to Monday is a tinderbox for the sisters in reclaiming their individuality in the outside world and for combatting the oppressive society that seeks to obliterate them for simply existing.

Stream ‘What Happened to Monday’ on Netflix now.