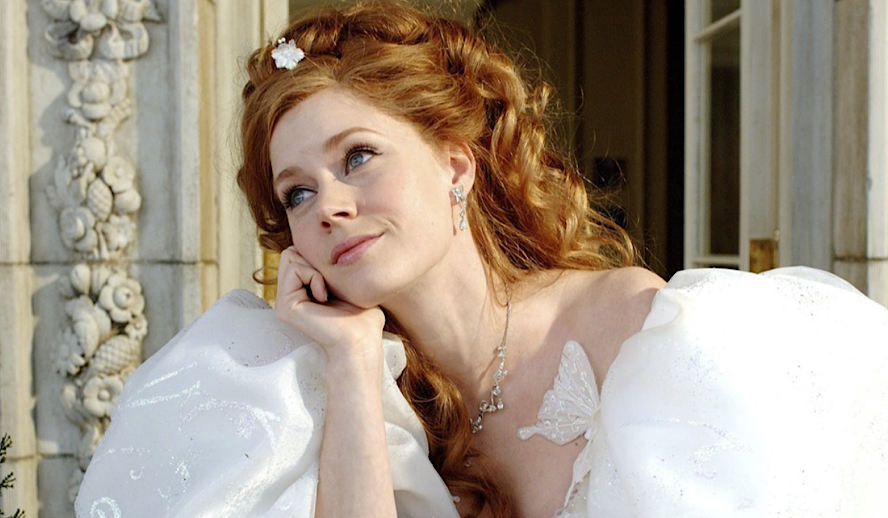 Amy Adams’ Princess Giselle will be returning to the big screen nearly 13 years after her original debut in Disney’s Enchanted.

News of the upcoming sequel, ‘Disenchanted’, was announced on December 10 and will be premiering on Disney+. Sean Bailey, the President of Production at Disney Studios, made the official announcement as part of this year’s Disney Investor Day, along with several other updates about Pixar, Marvel, and Star Wars content that will be arriving on the streaming platform. The Enchanted sequel is apparently set “ten years after the first movie, with Giselle finding herself questioning her happily-ever-after life and accidentally triggering events that make everyone’s lives turn upside down in both the real world and in the animated kingdom of Andalasia.”

Released in 2007, the original film is about Giselle (Adams), a cartoon soon-to-be princess who enters a portal and finds herself amidst the chaos of real-life modern-day New York City on her way to her wedding with Prince Edward (James Marsden). There, she meets and falls for Robert (Patrick Dempsey), a divorce attorney, while still being followed by the evil Queen Narissa (Susan Sarandon). A satire of Disney’s many animated princess musicals, it is both “an homage to and a self-parody of Disney’s animated features,” making several references to past works through the combination of traditional animation and live-action filmmaking, as the first feature-length hybrid since Disney’s Who Framed Roger Rabbit in 1988.

The film was well-received and grossed over $340 million worldwide, picking up three Oscar nominations for Best Original Song for Alan Menken and Stephen Schwartz’s songs “Happy Working Song,” “So Close” and “That’s How You Know..”

While few details were given by Bailey, as we do not know who will be penning the songs for the sequel, Adam Shankman, known for his work on Hairspray and Rock of Ages, remains attached to direct the film. He had originally signed on back in 2016, with a script from David Stem and David Weiss. At the time, Disney had been hoping to start filming in the summer of 2017, but production was clearly delayed.

Previous Talks of a Sequel

Talks of a sequel had been circulating since 2010, and over the years, the cast members themselves had discussed their hopes for bringing back the romantic-comedy film for a sequel.

James Marsden, who played Prince Edward in the original film, had previously mentioned the possibility in a conversation with ComicBook.

“I think they’re trying to get the script right,” he said. “And I think Amy’s interested, we haven’t really spoken about it but I keep hearing about it. But I also don’t- you know, we’ve been fooled before that it was gonna happen, it didn’t happen. We should do it before we get too long in the tooth.”

Songwriter Alan Menken also commented on the sequel back in 2017, when talking to Den of Geek about the status of the movie.

“Yes, we’re doing Enchanted 2,” Menken said. “We’ve had meetings. Five films I have right now that are waiting for a greenlight. They’re all standing at the light right now, and at some point, they’re going to go ‘greenlight!’”

Adams’ co-star Patrick Dempsey had additionally revealed two years ago that he was interested in reprising his role of Robert Philip, and had said that a team was “in the process of working on the book, the lyrics, and the musical aspects.” However, he mentioned his worries about not moving forward due to the challenges of making sure that the film would not be undermined by a lesser quality sequel.

“We’ll see what happens,” he said to Entertainment Tonight in October 2018. “I think it’s such a beloved movie we need to make sure it’s right before we move forward. And certainly, Amy was remarkable in that film and she’s an incredible actress and James Marsden as well. We’ll see, I hope it can live up to what we did originally, that’s the important thing. If it happens, then we do it.”

Adams herself had spoken about her opinions of a sequel during an appearance on “The Talk,” saying “I am absolutely up for that. We’re working on it — so hopefully.”

It has not been announced yet as to whether Dempsey, Marsden, and the other stars from the original film will return for Disenchanted, but given their prior interest, it seems highly likely.

Enchanted was Adams’ first major success as a leading actress, following several smaller high-profile performances including Leonardo DiCaprio’s love interest in Steven Spielberg’s 2002 film Catch Me If You Can, and a pregnant woman named Ashley in the 2005 independent comedy-drama film Junebug, for which she received her first Academy Award nomination for Best Supporting Actress. The subsequent Disney film then served to garner her even more mainstream attention, as she received a Golden Globe Award nomination for Best Actress in a Comedy or Musical. She had originally been one of 250 actresses auditioning for the competitive part and the studio had initially wanted to cast a bigger star, but director Kevin Lima had insisted on Adams due to her “commitment to the part and her ability to not be judgmental about her character’s personality.”

Since then, Adams has received a whopping five additional Academy Award nominations, for her work in films such as Doubt, The Fighter, The Master, American Hustle, and Vice, but fans continue to lament the fact that she has never won an Oscar for any of her deserving performances.

But now, 13 years after Enchanted’s original premiere, Amy Adams might just deliver a performance that will finally win her a much-deserved Oscar, as fans will finally get the sequel that they have been patiently waiting for.

As the coronavirus pandemic continues to impact movie theaters and the film industry, more feature films are being released on streaming services, and Disney+ has been no stranger to this thus far. With its releases of high-profile and much-anticipated films including Hamilton and Mulan that achieved high success and viewership, Disenchanted is sure to follow in those footsteps, especially if it is as remarkable and as magical as the original film.