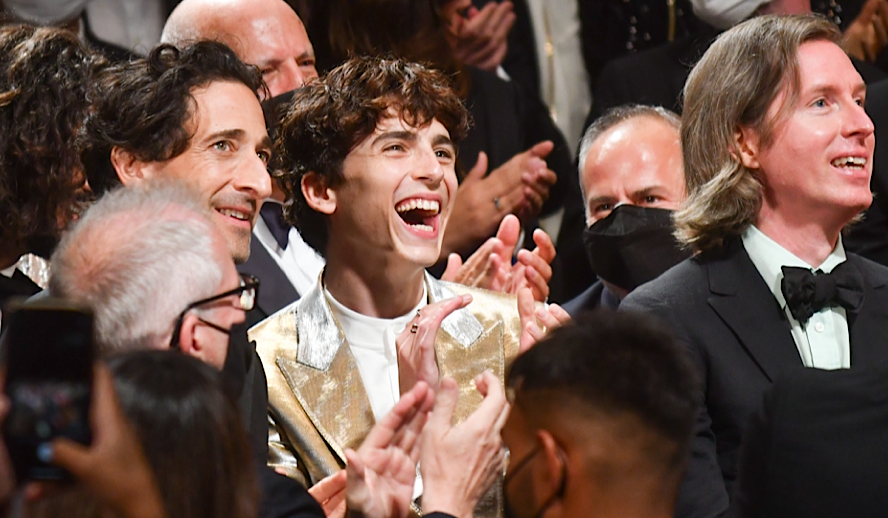 Last awards season may have just ended at the end of April, but movies wait for no one and the next batch of awards season contenders are already receiving their first screenings and premieres. Several of these films made appearances at the recently concluded Cannes Film Festival and will begin popping up at even more film festivals in the coming months such as the Toronto International Film Festival and the Venice Film Festival.

Here is a list of some of these films to keep your eye on that have great potential for the 2022 awards season:

Wes Anderson’s newest film just premiered at the Cannes Film Festival and is being billed as a love letter to journalism in the 20th century. It has an incredibly stacked and buzzy cast, starring Benicio del Toro, Adrien Brody, Tilda Swinton, Léa Seydoux, Frances McDormand, Timothée Chalamet, Lyna Khoudri, Jeffrey Wright, Mathieu Amalric, Stephen Park, Bill Murray, Owen Wilson, Liev Schreiber, Edward Norton, Willem Dafoe, Saoirse Ronan, Jason Schwartzman, and Anjelica Huston. Reviews for the film have so far been positive and with Anderson’s track record at the Oscars, this film is likely to make waves. You can find ‘The French Dispatch’ in theaters on October 22, 2021.

Another film that made its debut at Cannes this year, this musical stars Adam Driver and Marion Cotillard as a stand-up comedian and opera singer and what their lives look like after the birth of their first child. The musical marks the English language debut for director Leos Carax and has received generally positive reviews so far, especially for the actors at its core. ‘Annette’ will have a limited release in theaters beginning August 6, 2021, and will be widely available on Amazon Prime starting August 20, 2021.

This film from Jon M. Chu and Lin Manuel Miranda is already in theaters. Were the box office numbers not the best? Yes, but it is still one of the highest-reviewed films of the year and has several performances that could be strong contenders in the acting categories, especially for Olga Merediz as Abuela Claudia. The film was stunning and the Oscars do love a good musical, especially one with a timely message. If you haven’t yet seen ‘In The Heights’, run to your closest theater and see it right now.

This film made waves at the Sundance Film Festival when it received the highest rights distribution sale to Apple for $25 million. ‘CODA’, based on the 2014 French film ‘La Famille Bélier’, follows a 17-year-old girl who is in a culturally deaf family and is the only hearing member of her family, otherwise known as a child of deaf adults or CODA. The film stars Emilia Jones, Marlee Matlin, Troy Kotsur, Daniel Durant, Eugenio Derbez, and Ferdia Walsh-Peelo. It will be in theaters and available to stream on Apple TV+ on August 13, 2021.

While ‘Last Night in Soho’ looks like a borderline genre film, namely horror, it has a lot of other factors that are likely to propel it into the awards conversation. The film, written and directed by Edgar Wright, follows a young fashion designer who finds herself being transported back in time into the body of her favorite singer and both times seem to be falling apart the more she goes between the two. The film stars two of Hollywood’s biggest rising stars of the moment, Thomasin McKenzie and Anya Taylor-Joy, in addition to Matt Smith, Diana Rigg, Rita Tushingham, Terrence Stamp, and Jessie Mei. After making its debut at the Toronto Film Festival in September it will be in theaters beginning October 29, 2021.

When talking about stars on the rise, ‘Blonde’ is the chance for another one of those names to grow even larger. Ana de Armas will be portraying iconic actress Marilyn Monroe in the fictionalized tale of her life based on the 2000 novel of the same name. It also stars Adrien Brody, Bobby Cannavale, and Julianne Nicholson. Many awards-voting bodies love portrayals of real-life figures, especially ones who were in showbusiness, and de Armas is a fantastic actress so the odds of at least her performance getting a nomination is good. There is no release date yet for ‘Blonde’ but it will be coming out on Netflix.

If there is any indicator as to ‘Don’t Look Up’ having a chance at any awards shows this year, the cast alone points almost all signs towards yes. The film, written and directed by Adam McKay, stars Jennifer Lawrence, Leonardo DiCaprio, Meryl Streep, Timothee Chalamet, Cate Blanchett, Jonah Hill, Matthew Perry, Ariana Grande, Rob Morgan, Himesh Patel, Kid Cudi, Tyler Perry, Chris Evans, Gina Gershon, Mark Rylance, Michael Chiklis, Ron Perlman, and that’s not even the entire main cast! The cast is filled with awards show darlings so I think it’s safe to say we will be seeing this film pop up a fair amount in the coming season. There is not a release date for it yet but it will be coming out before the end of the year on Netflix.

‘The Eyes of Tammy Faye’

This film is a passion project for its star and producer, Jessica Chastain, who has been working to get this film made since she acquired the rights to Bakker’s life in 2012. She will be portraying televangelist Tammy Faye Bakker alongside Andrew Garfield as Jim Bakker. Joining them will be Cherry Jones, Vincent D’Onofrio, Sam Jaeger, Gabriel Olds, Mark Wystrach, Chandler Head, Fredric Lehne, and Jay Huguley. From the teaser trailer alone, Chastain’s transformation is likely to garner her support from awards bodies and will probably get her some nominations in addition to other possible ones for the film and her costars. The film will be in theaters starting September 17, 2021.

Historically, Marvel movies haven’t made many waves during awards season outside of ‘Black Panther’ but ‘Eternals’ is likely to change that. The fact that it’s directed by the reigning Best Director Oscar winner Chloe Zhao definitely helps its case and it boasts having an incredible cast (although what Marvel film doesn’t have a great cast) in Gemma Chan, Richard Madden, Kumail Najiani, Lia McHugh, Bryan Tyree Henry, Lauren Ridloff, Barry Keoghan, Don Lee, Kit Harrington, Salma Hayek, and Angelina Jolie. If the teaser trailer is any sign, this is likely to be the most stunning Marvel film yet and Kevin Feige has repeatedly said how impressed he is with the film Zhao crafted and even shifted its release date to be in the prime real estate for awards season films. ‘Eternals’ will be in theaters starting November 5, 2021.

The new Ridley Scott film has already made waves on the internet from the leaked photos from the set and the images Lady Gaga posted on her Instagram account. The film follows the story of Patrizia Reggiani and her plotting, carrying out, and the aftermath of the assassination of her ex-husband, Maurizio Gucci. The film stars Lady Gaga, Adam Driver, Al Pacino, Jared Leto, Jeremy Irons, Jack Huston, Reeve Carney, and Salma Hayek and will be in theaters beginning November 24, 2021. This is the kind of film awards voters eat up when it comes time for nominations so keep an eye out for this one.

The Florence Pugh-issance is only continuing as we enter into the back half of the year with the Olivia Wilde-directed ‘Don’t Worry Darling’. Pugh plays a housewife in the 1950s who discovers a dark truth amidst her husband also hiding a dark secret from her. The cast is filled out by Harry Styles, Chris Pine, Gemma Chan, Kiki Layne, Nick Kroll, and Wilde herself in a supporting role. Between the ensemble cast, the fact that Pugh hasn’t had a miss yet when it comes to her acting roles, and what a success Wilde’s directorial debut was, this film could prove to be a force to be reckoned with come awards season. It doesn’t yet have a release date but is supposed to come out before the end of the year.

There are so many films that could play into awards season this year to come out but these are just a few of the ones already garnering buzz. We’ll just have to wait and see what happens next year!