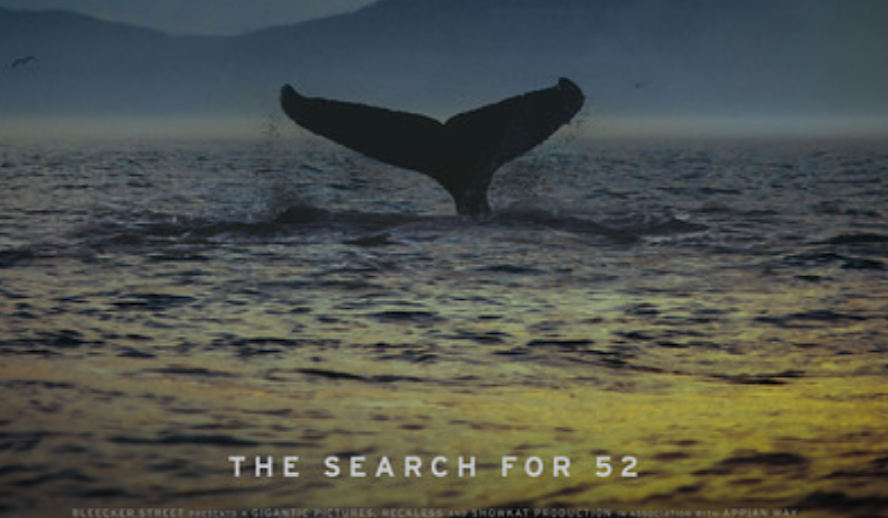 Photo: ‘The Loneliest Whale: The Search for 52’/Bleecker Street

In the year 1989 oceanographer Dr. William Watkins identified a biologic phenomenon. Watkins was working with the United States Navy on SOSUS (Underwater Sound Surveillance) when he first observed an unidentified sound and labeled it as a whale’s call. This call was different to any other whales on Earth, a frequency lower than other Blue or Fin whales, this means it is literally incapable of communicating with other whales.

Whales can hear the 52 Hertz call, but they cannot understand it, essentially making a different language. The discovery of this call created a worldwide movement as people began sympathizing with the lonely creature. 52, as the whale is called in shorthand, has never been seen by the human eye, never been videotaped, never photographed, and almost everything about the whale is shrouded in mystery.

Enter Joshua Zeman. The documentary filmmaker’s bio on Twitter reads, “Curator of the Bizarre, Misunderstood, and Mysterious.” and ‘The Loneliest Whale’ is a perfect addition to that curation. Zeman set out to meet the lonely whale, venture to the Pacific Ocean and find 52 among millions of square miles of water. He obviously would be incapable of doing this monumental task alone, so he documents the truly heart-warming adventure that became his journey.

The film touches on the science of finding the beast, the magnificence that is a whale, the horrors of whaling, the science of communication and echolocation, and the psychological and philosophical components that link 52 to humanity. In most every way, ‘The Loneliest Whale’ is a watch that sticks within the mind, touches the heart, and shines a light on a criminally underappreciated subject matter; whales, altogether, but specifically, 52.

The Man and The Whale

Zeman opens the film by showing the sea. Not the sea that you expect, but the sea of humanity that is Manhattan, New York. We watch an ocean of people sweep by, observing faces and crowds, groups mingle and rush by to work. The ebb and flow of the tides of humanity, the social essence that pervades the soul of mankind.

What is it to be “lonely?” Can a whale even feel that kind of emotion or is lonesomeness a construct of the innate human need for social structure and companionship? Well, the whale’s brain, as detailed in the film, is larger than humans’ and has all the same physiological components that formulate emotion, plus they are a group-centric species, so, it seems likely they do in fact have emotion. So what is lonesomeness, then? What is communication? Man and whales alike both utilize communication to find each other, transfer information, avoid danger, build family units. It is clear that humanity and whales are intrinsically linked as it is very easy for a man to use the whale as a type of canvas.

A canvas for us to project our feelings onto and use as a mirror into ourselves. ‘The Loneliest Whale’ does a fantastic job of demonstrating that mirror and, really, portraying director Josh Zeman through that mirror. It is an introspective and thoughtful essay on the exploration of lonesomeness and what it really means to be lonely.

However, the film does not only focus on these philosophical musings. It is fun, gripping, and very very educational. I would hope that this film gains traction in schools and begins screening in middle and high schools because of its hard-hitting and gripping educational nature, frankly.

Although the film touches on a number of vastly important and interesting topics, the central theme is still Zeman’s expedition to find the 52 Hertz whale. Zeman builds an impressive scientific team that uses echolocation, underwater sound monitoring, helicopter coverage, and done flights to find, track, and monitor whales in the hopes of finding 52. The trek begins with finding an area of ocean where 52’s call can be heard, giving them a basis for an area to search. They are thus able to narrow down the ocean to about a 5,000-mile wide area where they will tag as many whales as possible and hope to find an aggregate where large groups come together to better their overall chances.

The team sets off the southern coast of California and begins tagging and tracking whales. The film is really amazing at this point, it’s beautifully shot, completely absorbing in its subject matter, and uses some amazing animation and metaphor to provide emotional depth. Surprisingly, this film was produced by Leonardo Dicaprio who personally financed the film, and the large sum he donated shines through in this is a beautiful, beautiful picture (Thank you, Leo).

The team goes through ups and downs, finds whales, loses whales, and deals with surprising difficulties. The worst and most depressing hurdle for the team was having to deal with noise pollution. The team had found a massive pod of whales, observed a hybrid whale (which was later confirmed to be the type of whale 52 was), and lost them due to a massive container ship coming by and drowned out all the noise for hundreds of miles. This seems like an unlucky coincidence but, as Zeman describes, whales communicate by sound. Their calls travel hundreds of miles and need to be heard to be rendered useful. What happens when the ocean is littered with tankers and freightliners, underwater drilling, and oil explosions? How are these beautiful creatures meant to communicate?

Ultimately, the team fails to find 52, but we do come to a rather touching conclusion. 52 may be alone communicatively, but he travels in pods, nonetheless. He has friends and a home and, strikingly, there are more than one 52. Yes, 52 was tracked via underwater sonor more than 100 miles apart at the exact same time. Clearly, there are more than one of 52’s species existing in the world today. So the loneliest whale in the world is not actually so lonely, and really, I think that resolution fits the story better than anything else.

‘The Loneliest Whale’ is a very touching film about the Earth, humanity, emotion, and how all of these things are intertwined. It does stumble sometimes, but the grand focus and nature of the film tie it all together and present a beautiful kaleidoscope of ideas about the nature of the ocean. There is a magical, ethereal feel to observing and listening to these godly creatures, seeing them swim, make music, and change lives. This is an important film to watch and I would strongly recommend it to anyone. I really believe this film should be shown in schools, especially. It is extremely educational whilst still being viscerally entertaining. This is the type of material that needs to be in schools to get children interested and invested in changing the world and, heaven to goodness, did it have me fully invested. See it, it’s better than most of what’s out right now, I promise.