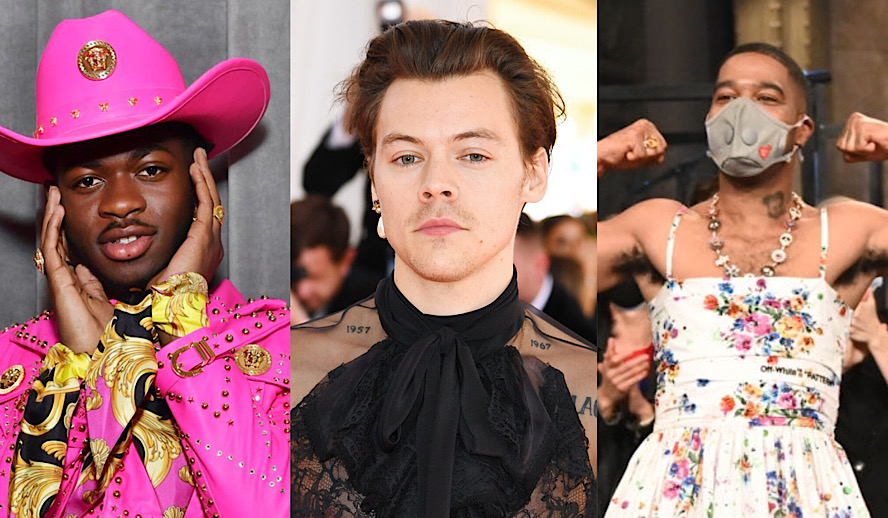 I personally love this emerging movement of men embracing their artistry and gender expressions through the use of clothing and style. It is refreshing to watch men be men without sacrificing their creativity and sensitivity to meet society’s standards. It is effective in challenging the gender stereotypes that have taken over our lives and the perceptions we may have of people. Many men in the entertainment industry have donned themselves in attire that would be categorized as feminine but it seems to be happening more frequently in the music industry.

Of course, we can’t forget musical icons such as Prince, David Bowie, and Freddy Mercury, who all paved the way for current fashion idols and served as influential muses for these current celebrities. However, the topic seems to matter more today than in any other generation. We are battling a lot of bigotry and prejudice these days, and it is important for people with a voice to make statements. This article will discuss current musical stars Harry Styles, Lil Nas X, Bad Bunny, and Kid Cudi. They have been very unapologetic in their message of gender fluidity, and we are all here for it! Despite all the flack and distaste, they may have received for their choices of expression, they did not let that tear them down. Instead, these men continued to be their authentic selves.

Ex-One Direction mate, Harry Styles has proved himself to be a fashion icon for many years now. On occasion, he has worn dresses and decorated his nails in colored polish. However, it wasn’t until the Gucci jacket and dress pairing he rocked in his Vogue December 2020 cover. Harry claimed, “I find myself looking at women’s clothes, thinking they’re amazing.” in an interview with Vogue. The dress was a beautiful powder blue shade with black lace trimmings. It had an asymmetrical bustle, and a long, whimsical train. The soft dress was paired with a dark, pleather, double-breasted tuxedo jacket. The ensemble beautifully demonstrated a cross between femininity and masculinity. While most people praised the magnificent, angelic photos, many still disapproved.

Styles received a lot of hate from the pictures from political figures and podcasters. Harry responded to the criticism on his androgynous style saying, “Clothes are there to have fun with and experiment with and play with. What’s really exciting is that all of these lines are just kind of crumbling away,” he continues, “There’s so much joy to be had in playing with clothes. I’ve never really thought too much about what it means—it just becomes this extended part of creating something.” We’re glad to hear that the distasteful remarks and criticism don’t get in his head, and he has no intention of putting an end to what makes him happy.

In the summer of 2019, Lil Nas X came out to the public as a gay man. He faced the backlash with patience, grace, and humor. Since then, the rapper has sported some incredibly fabulous wigs, creative nail art, and bold lip colors. He has attended music award shows and appeared in many music videos, rocking his super colorful and outlandish outfits. Of course, criticism began flooding his socials over his choice of expression, but that never seemed to affect the artist. He stayed firm in his sexuality and truly admirable gender expression.

In the fall of 2020, Lil Nas X partnered with Christian Cowan for a spunky-gender fluid fashion collection for spring of 2021. Although the message for this clothing line covers serious matters such as the attack on Black and Trans lives, the ensembles are very lively, quirky, and fun in nature. Vogue describes the line as, “full of glitzy fashion escapism – largely inspired by both the punk and queer movements of the 1970s”. I find that Lil Nas X is so inspirational in the way he shrugs off the attempts to tear him and his message down, and how he continues to provide a voice for Black and LGBTQ youth.

Popular Latinx trap star, Bad Bunny, has a unique fashion story from head to toe. His haircuts are innovative. His attire is a mix of business and party, in the best possible way. However, the most notable fashion feature in Bad Bunny’s ensembles is his jaw-dropping statement nails. Sometimes he just paints them a solid color. Sometimes he’ll decide to decorate them with fun stickers, and designs. Most times, the rapper likes to go all out with a full acrylic set. A photo taken at the Premios Billboard Red Carpet, became the highlight of the month, when it displayed Bad Bunny in a lilac suit, with lime green hair, and pastel yellow acrylic nails.

The discourse over these funky nails were both favored by some people, while at other’s dismay. In the summer of 2018, Bad Bunny spoke with ‘Refinery29’ about the choices he makes with his nails. He goes on to say, “Men also take care of themselves. There is no need to criticize why one decides to maintain themselves in one type of way. Stop the ignorance and let’s think with a more open mind. We’re in 2018, and we are supposed to have equality.” We couldn’t agree more with this statement. Men shouldn’t have to fit into one tiny mold. Men come in a variety, just like women.

Earlier this month, Kid Cudi made an appearance on ‘Saturday Night Live’ (‘SNL’), where he performed his song ‘Sad People’ in a floral printed, floor-length dress, paired with a matching necklace. The ‘Day N Nite’ singer received both praise and judgment for his choice of attire. Cudi confirmed the Sunday after the performance, the dress was meant to be a tribute to the death of a musical legend, Nirvana lead, Kurt Cobain. Cobain wore a similar dress in 1993 while appearing on the cover of ‘The Face Magazine’.

The dress was designed by Virgil Abloh, and made by the label, ‘Off White’. Although this was a beautiful, touching tribute to Cobain, there were still some people upset over the image of a man wearing a dress. This instance overall was more well-received than those previously mentioned, because of the fact that its purpose was to pay homage to another artist.

I believe the best way for men to embrace their masculinity is by being their true, authentic selves. You can be fearless and strong, while still being fashionable and artistic. People need to let go of the stereotypes and the stigma surrounding clothing. Clothing has no rules. We shouldn’t decide who gets to wear what and why. Once we let go of our need to criticize, judge, and shame people, we will be much happier as a whole. I admire these men for their courage, leadership, and unapologetic way of just being who they are.

Harry Styles will be set to star in an upcoming film, ‘My Policeman’, alongside Emma Corrin. The film is directed by Michael Grandage.

Lil Nas X is receiving great news as his debut album ‘MONTERO’ has stayed on the higher spectrum of the Top 100 charts within the month.

Bad Bunny has announced tour dates for his 2022 El Último Tour Del Mundo. The artist will tour across America from February 9th to April 3rd.

Kid Cudi reportedly is in collaboration with Virgil Abloh and his brand, ‘Off White’ to make the Cobain tribute dress a part of their collection.