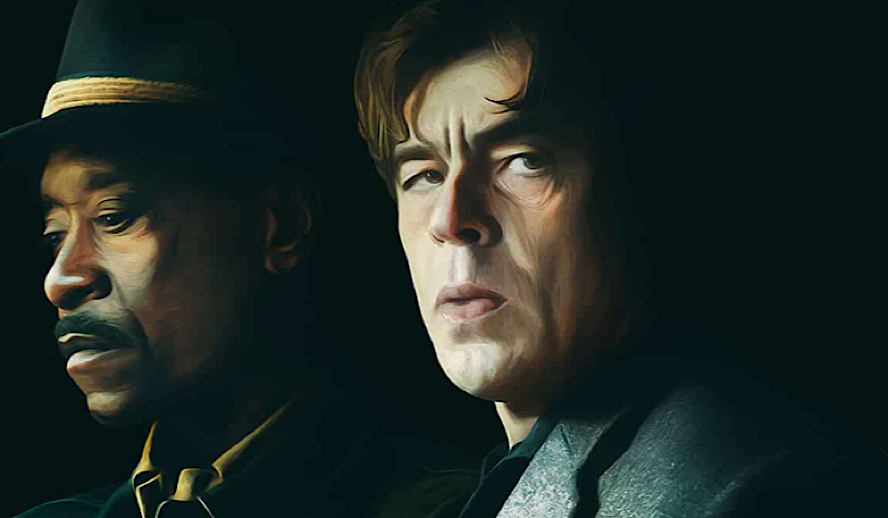 Set in the wild American Midwest of Detroit, Michigan, ‘No Sudden Move’ is, on the surface level, a crime-thriller about the Italian and African mobs that ran the Motor City throughout much of the 20th century. The film is a rather standard mob flick, strikingly reminiscent of Shane Black’s ‘The Nice Guys’ from 2016 and Scorsese’s ‘The Irishman,’ however, Soderbergh’s work is unique in a number of senses. Although following an almost trite subject matter, hired guns and mobsters, Soderbergh manages to subvert expectations by making the film, largely, a commentary on capitalism, greed, and corruption within the American elite, in this specific case, the automobile industry that made Detroit famous.

The political commentary within ‘No Sudden Move’ is handled rather well and is not broached, for the most part, until the second half of the film. The beginning half is a purposefully confusing set-up that sets the overall tone and theme of the film; trust gets you killed and everyone around you has an ulterior motive. Metaphorically, this set-up is representative of a huge portion of the American elite, but through the first hour of the run time, we are mostly observing low-level mobsters and minor shot-callers. This understanding of the social hierarchy is what is so alluring about ‘No Sudden Move.’ We start out following some everyman characters who haphazardly climb the social echelons until they are rubbing elbows with the mightiest figures in all of Detroit.

The Plot of ‘No Sudden Move’

Kurt Goynes (Don Cheadle) is a member of the African mob in Detroit and was just released from jail after a job gone bad. He is hired for a new job by Mr. Jones (Brendan Fraser), a man whose allegiances are unknown and the job sounds a bit too sweet to be true. They pick up one more guy, Ronald Russo (Benicio del Toro), before meeting up with a third party and discuss the parameters of the job. They are tasked with babysitting a family while Charley (Kieran Culkin) takes the family’s businessman patriarch (David Harbour) to steal a file from his boss’s safe. The job goes awry when Kurt senses a set-up and kills Charley, submerging himself and Russo in a massive plot to steal revolutionary designs for the catalytic converter, a device that now is used to control emissions from automobiles.

The two form an unlikely alliance and begin scheming with, and occasionally against, each other to secure the files and sell them, themselves. The pair goes from dingy bars and houses to middle-class homes, to upper-middle-class homes, then to the upper class, then to the 1% as they slowly sniff their way to the money. They start out working for a measly $5,000 which turns into $25,000, then becomes 45, then 90, up to $125,000 then, finally $409,000. All the while dealing with every mobster they’ve ever known trying to double-cross them and take what they want at their expense. It is honestly quite interesting and fun to watch del Toro and Cheadle interact and progress through the mystery and up the social ladder. They have great chemistry and really hold the movie together.

I wanted to first discuss what I did not like about this film because it will be rather brief, especially compared to the things I did, in fact, enjoy. I have only two complaints and they are somewhat interchangeable in the sense that without one, the other likely wouldn’t have been a problem. The largest problem with ‘No Sudden Move’ is the ending. The ending leaves you feeling somewhat robbed, no pun intended. I understand, the larger thematic idea within the picture is the big guy always wins, but in this case, the big guy winning seems counterintuitive and, in some cases, totally random.

The second issue comes from the pace of the film. It does tend to drag a bit towards the end, and that is a component of why the ending seems to fall so flat. As we observe each character’s resolution, I thought the movie should’ve ended several times. Because every last character gets screwed over by the bigger man it just becomes so tiresome and sluggish you can tell exactly what is coming.

Overall, I quite enjoyed ‘No Sudden Move’. I was interested from the very beginning and it held my attention throughout, even though I am a bit tired of the mob movie sub-genre at this point. This is one of my favorite Soderbergh films, I’m happy to say, even though the director has a number of hits under his belt (‘Ocean’s Eleven’, ‘Contagion’, ‘Magic Mike’). Soderbergh does a great job letting his actors breathe, giving Cheadle, del Toro, Ray Liotta, and even Brendan Fraser (and a surprise cameo from Matt Damon) the opportunity to make their characters theirs. Soderbergh also assumed the position of cinematographer and I really noticed some inspired camera work throughout. Some lovely long shots, hardpans, and some overall creative ideas really bolstered the film, as a whole.

The film, aside from its lackluster ending, is very intelligent, as well. Writer Ed Solomon (‘Now You See Me’, ‘Men in Black’) crafts a really detailed and coherent, albeit ambiguous, piece of social commentary. Cinematography and writing were not the only technical elements I found myself enjoying throughout. I also found the score, composed by David Holmes (‘Ocean’s Eleven’, ‘Hunger’) to be the perfect mix of an eclectic mid-century vibe and a toned-down, subtle emotional guide. Overall, I thought ‘No Sudden Move’ was very technically competent and was performed fantastically by its ensemble cast.

‘No Sudden Move’ was hampered quite significantly by the pandemic, having its release pushed back several times and ultimately being dropped onto HBO Max with little to no fanfare. This is a shame because this is a genuinely good film, better than a lot of other things I have seen in theaters of late. As mentioned, this film is now streaming on HBO Max and is a good movie to watch as a family or on a date night. It does overstay its welcome a bit, but overall it’s a competent, well-acted piece that is at the very least inoffensive. You can certainly do worse than ‘No Sudden Move’ when selecting a movie from the plethora of films being dropped into streaming, lately. I endorse ‘No Sudden Move’ and would recommend it to almost anyone.