A Tribute to Tilda Swinton: Hollywood’s Most Unique & Diverse Actress Who Refuses to Fit In 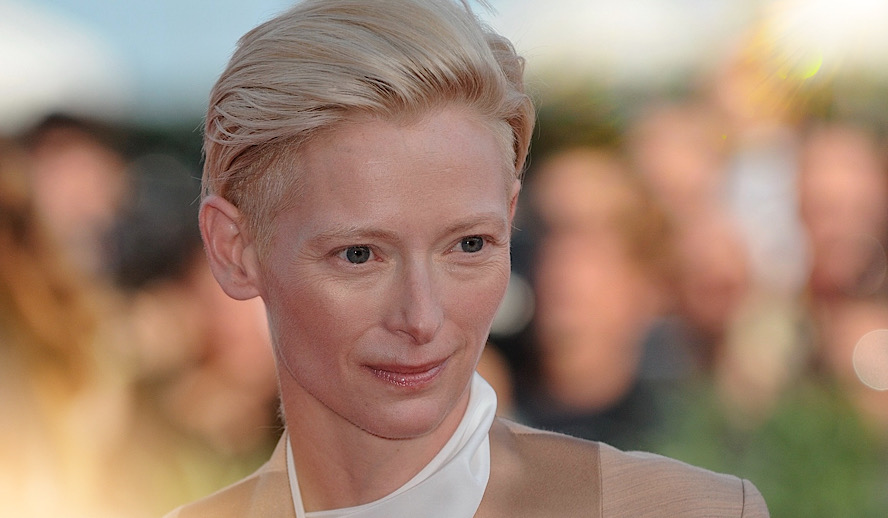 Academy Award-winning Scottish actress Tilda Swinton was born and raised in London, England. Her father was the Laird of Kimmerghame House and many of her relatives had been politicians or received a moderate amount of publicity in their fields. From a young age, she was raised with more public scrutiny and expectations than many of us will ever face. Of course, this pressure only got worse when she became an actress, but she dealt with it well and a lot of it is due to her upbringing.

She was educated in three independent schools during her childhood and often brushed elbows with other royalty like Princess Diana. Three years before her screen debut, Swinton received a degree in Social and Political Science and then started working for the Royal Shakespeare Company. College began her passion for acting and it continued to grow even after she had left school.

In 1986, Swinton made her screen debut in the feature film ‘Caravaggio’. After this part, her career grew and grew. As the years went on, she would continue to make her career off of archetypal villains and comedic characters with critical acclaim. When she’s not playing those roles, Swinton often portrays morally grey characters and always gives powerful performances. There is no one in Hollywood who is more diverse than Tilda Swinton and that’s why we’re penning this tribute to her.

In 2005, Swinton played the role of the White Witch Jadis in ‘The Chronicles of Narnia: The Lion, The Witch, and the Wardrobe’, where her films grew to more widespread audiences. In this movie, Swinton was praised by critics for her performance as well as her charismatic but cruel portrayal of the main villain. This role began a long line of other parts where Swinton plays a more antagonistic role instead of heroic ones.

Each time, Swinton elevates the given part and adds her own twist. For example, in Bong Joon-Ho’s ‘Snowpiercer’, Swinton acted as the second-in-command on board a dystopian train that never stops. In this role, Swinton brought a quirkiness to the role that was necessary for such a heavy and tense movie. Although she was one of the antagonists, and seemingly ordered violent attacks against the main cast of heroes, Swinton also provided comic relief in smaller moments. ‘Snowpiercer’ is such a bloody and thriller-like movie that the three-dimensional character Swinton was able to create helps elevate the film even further.

After the success of ‘Snowpiercer’, Swinton appeared in another one of Joon-Ho’s movies, 2017’s ‘Okja’. In ‘Okja’, Swinton played Lucy Mirando who became CEO after successfully pitching her plan to breed a “super pig”. As well as that, she also plays her twin, a power-hungry Nancy trying to get the CEO position from Lucy. This dual role exhibits Swinton’s masterful acting as she plays a much crueler antagonistic as well as a misguided antagonist. In one scene, for instance, Swinton has to argue against herself which on paper sounds like it could possibly fall flat. Nothing Swinton does is less than spectacular though and she manages to represent two twins who are extremely different but are still played by the same actress. Truly, Swinton is in a class of her own.

While Swinton is often cast to play villainous roles, she also routinely plays comedic characters. Most of her comedic parts are for Wes Anderson, a director known for his vibrant color palettes as well as the comedic elements in his dramas. Also, he uses a lot of stop motion animation and typically utilizes filmmaking techniques that no other director does. Swinton first acted for Anderson in 2014’s ‘The Grand Budapest Hotel’ as Madame D, an older woman whose murder becomes the inciting event for the film. She’s only in one conversational scene, but her presence is still felt throughout. She’s the first celebrity of Anderson’s recurring actors that we see, but beneath the wrinkled skin and the giant wig, Swinton’s face is still recognizable. By 2014, almost thirty years after she’d begun her career, Swinton was one of the most beloved actresses in the world. Even when she’s barely in a film, the delivery of her lines is so on point that her characters are unforgettable.

In another Anderson film ‘Isle of Dogs’, Swinton plays a tiny pug with a love of television in a Japanese world that is anti-dog. It’s a strange concept for sure, but even the mental image of Swinton voicing a pug is hilarious. The combination of Swinton’s delivery and Anderson’s casting creates memorable and funny moments. Even in smaller parts, Swinton is able to bring a new dimension and new humor to her characters.

Tilda Swinton – The Best Of Both Worlds

While some of Swinton’s roles are black-and-white, many are also more muddled. Sometimes, she’s not clearly an antagonist or an ally, she serves as part of the supporting cast. For instance, Swinton acts as a love interest for Brad Pitt in David Fincher’s ‘The Curious Case of Benjamin Button’. She’s a married woman and having an affair with Pitt’s character, Benjamin, but provides a newness to Benjamin’s life.

She becomes his first love and their trysts continue for the duration of their stays in a hotel. This issue by itself is one that’s morally grey, Swinton’s husband is a British Minister and rarely around, so she finds comfort in the earnestness that she finds in Pitt. In the end, Swinton is supposed to meet Pitt’s character in their designated meeting spot but leaves him without much warning. This role showed Swinton’s ability to adapt to different characters as well as portray characters that aren’t clearly a hero or a villain.

In another movie, Marvel’s ‘Doctor Strange’, Swinton plays the predecessor to Benedict Cumberbatch’s Doctor Strange. She’s an androgynous being that invokes both fear and wonder in Cumberbatch’s character and the audience. Swinton plays the role with such grace and such poised behavior with minimal reactions the majority of the time. She’s able to command her body and her facial expressions at such a high level that it’s extremely impressive.

Beyond any roles that Swinton has been typecast to play, this renowned actress is able to act in any type of role. She excels in everything she does, partly because of her experience and partly because of her pure talent. One thing is for sure, there has never been a more diverse actress than Tilda Swinton and she’s left a permanent mark in the Hollywood world.