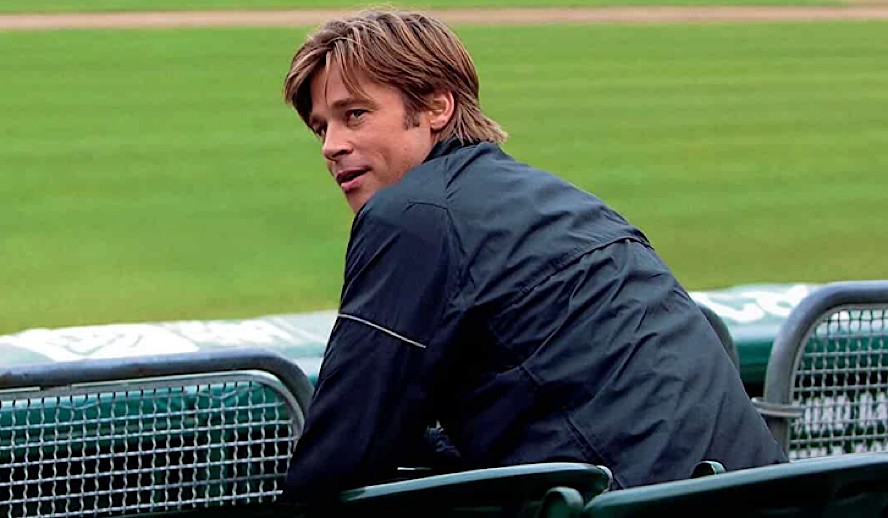 Moneyball is a solid drama starring Brad Pitt as real-life Baseball manager Billy Beane. It charts his quest to circumvent his team’s lack of finance and the ensuing revolutionary strategy he and his partner Peter Brand (Jonah Hill) introduced into the sporting world: Moneyball, an intelligent concept devised to evaluate players based solely on statistics.

A Sports Film Unafraid To Be About Sports

You don’t have to be a baseball fan to enjoy Moneyball, but its’ surprisingly detailed portrayal of the inner workings of an athletic institution should be universally interesting to anyone who follows sports more generally. Most sport-dramas overemphasize personal struggles in order to appeal to a wider audience, yet Moneyball is unafraid to primarily be about baseball, which is a gutsy approach given the mass appeal it seeks. It mostly succeeds; I am not a baseball fan, and I was still engaged for most of the runtime. Beyond this, the central struggle of the protagonists makes an important statement about the nature of money in sports. Billy and Peter are likable underdogs. They are limited financially yet they still find a way to use their money effectively, and you root for them in their quest to outthink the bigger, richer teams.

In a time where sport clubs around the world are suffering from the effects of the pandemic, Moneyball seems like a relevant story about the importance of tactical nous over mindless money-splashing. This fiscal awareness speaks to the film’s humanity, which is further made apparent through the relationship the Moneyball strategy creates with players. The need for inexpensive, discarded athletes to better themselves is important to the story – and the fact that Beane and Brand’s exploits provide the groundwork for such improvement is a heartwarming feature.

Though it is hard to make baseball dramatic to the unconverted, Moneyball effectively establishes the initially catastrophic tension brought about by the introduction of this new strategy. The relationship between Beane and his colleagues is immediately strained. This plays well, particularly during the exchanges between himself and Philip Seymour Hofmann’s Art Howe. The confrontations work because those opposing Beane aren’t villainous – their disdain is totally understandable, which gives the film a welcome sense of nuance.

‘Moneyball’ Success with a Sharp Script

Stylistically Moneyball is similar to The Social Network, which is a connection I made before I even knew that it was written by the same writer, Aaron Sorkin. The well-decorated Steven Zaillian (The Irishman) is also a co-writer, so it is no surprise that the script is razor-sharp, which it needs to be in order to make the potentially dry subject matter engaging. Aaron Sorkin is the king of smart-people-talking-to-each-other-smartly and he demonstrates this again here. There are some standout scenes, such as the awkward encounter between Beane and his ex-wife (Robin Wright) and the fiery boardroom meetings, which are greatly enhanced by the naturalism of the dialogue. The verbal confrontations are particularly well-penned; Sorkin and Zaillian rarely pick a clear moral victor, instead choosing to present two valid points of view articulated by intelligent mouthpieces.

The film is also a character study of Beane in many ways, which works because he is an engaging protagonist. He isn’t as heroic as the film’s posters suggest – he blatantly disrespects his co-workers and ruthlessly dispenses with players. The film refuses to either glorify or condemn his behavior for the most part, which is a testament to the quality of its’ writing. Beane also evolves throughout the film in small but interesting ways. His inability to watch his team play becomes a well-developed point and his increasing camaraderie with the players is touching. He only passingly mentions his daughter at first yet her importance to him is increasingly revealed. He feels like a multidimensional character, which adds a human element that helps counter the film’s occasionally languid, baseball heavy focus.

A Cast That Seems Bigger Now Than It Was Back Then

Moneyball’s cast isn’t often discussed, perhaps because most of its’ performances are understated, but it does have a stellar selection of actors, most of whom enhance the characters they are playing. In some ways, the film owes its success to these actors because many of these personalities could have been dry if played by worse performers. As alluded to, Pitt gives a fine performance as Beane. Jonah Hill also proves that he would go on to be more than just the-snarky-funny-guy, in a career-shifting role as the awkward but quite brilliant Brand. The late Philip Seymour Hofmann is perhaps the unsung hero though, as he often was; his character’s deflated helplessness is conveyed brilliantly and you feel for his plight despite his opposition to the protagonist. A younger, more awkward Chris Pratt‘s performance is also worth noting as baseball player Scott Hatteberg, as well as the ever magnetic Robin Wright as Beane’s ex-wife Sharon.

Though Moneyball’s commitment to being a sports film is largely positive, this is also what limits its reach. Though an enjoyment of baseball isn’t necessary to appreciate it, an interest in sports probably is, not least because so much of the drama relies upon the intrinsic tension it creates: will Oakland lose or will they win? If you don’t care about this then the film will likely only have a limited impact on you. Also, though the drama is engaging, for the most part, it occasionally dawns on you that none of this really matters and that it is only baseball, which slightly dampens the sense of importance the film attempts to create. This is particularly apparent when the film reaches for big emotions towards the climax. This occasional sense of misfiring is also present during the flashback scenes revolving around Beane, most of which seem uncharacteristically clichéd for an otherwise well-grounded film. Still, the film managed to make me care even a little is an achievement given my lack of knowledge of the subject.

Overall Moneyball is perfectly fine viewing even if it is slightly dispensable. Its’ witty, heartfelt script is its main strength, and it is probably best enjoyed by sports fans. It contains excellent and slightly underrated performances by an A-list cast which further adds to its appeal. Worth your time.

‘Moneyball’ is currently available to stream on Netflix.