‘Hitman’s Wife’s Bodyguard’: Derivative, Nonsensical, and Not Much Fun 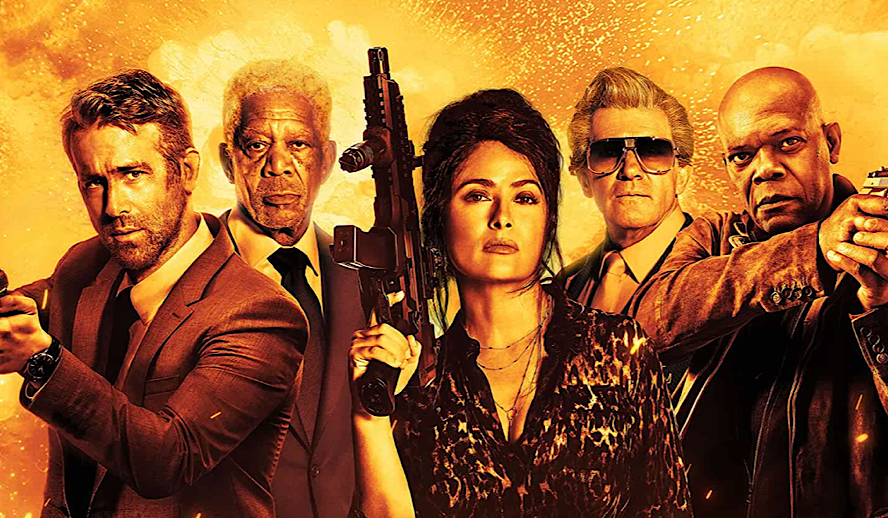 Ryan Reynolds revolutionized quippy dialogue and a “F*ck it” attitude when 2016’s ‘Deadpool’ released, the anti-Super Hero who guns down dozens while doing so with a happy-go-lucky demeanor. ‘Deadpool’ was a massive success and, ever since, Reynolds has been doing the same old song and dance to significantly less acclaim with each passing year. ‘The Hitman’s Bodyguard’ in 2017, ‘Deadpool 2’ in 2018, ‘6 Underground’ in 2019, and now, ‘Hitman’s Wife’s Bodyguard.’ The act is getting rather stale after five nearly identical movies, especially when they come out year after year, without fail.

By no stretch of the imagination could ‘Hitman’s Wife’s Bodyguard’ be considered or labeled a good movie. The staleness of Reynold’s act does not bode well for the film, but it also doesn’t prevent the movie from being good, although it does make it harder to enjoy. What does, however, prevent the movie from being inherently “good” is the complete and total absence of any impactful narrative, any semblance of originality, and an utter lack of care for the likeability or intelligence of its lead characters. However “bad” ‘Hitman’s Wife’s Bodyguard is, certainly does not mean it has no redeeming qualities.

It does have some bright spots, but because these moments are brief and happen rather sparingly they are not nearly enough to save the picture from its fate as one of the worst releases of 2021, thus far. And why drop the ‘The’ from the title? ‘The Hitman’s Bodyguard’ followed by sequel, ‘Hitman’s Wife’s Bodyguard,’ I know, it’s a small detail but it’s an example of a larger problem the film has with poor decision making.

As mentioned, ‘Hitman’s Wife’s Bodyguard’ is a direct sequel to the 2017 box office hit ‘The Hitman’s Bodyguard.’ However, you do not need to see the original in order to understand the sequel. Although it follows the same people under the same circumstances as previously, this is a totally stand-alone story. In ‘The Hitman’s Bodyguard’ Ryan Reynold’s Michael Bryce is a AAA-rated bodyguard, one of the most elite in the world, and is tasked with protecting one of the most notorious Hitmen on Earth, Darius Kincaid (Samuel L. Jackson), as he must testify at International Court. What follows is a shoot-em-up irreverent comedy as the two battle hundreds of assassins as they try to escape the villainous Vladislav Dukhovich, played by Gary Oldman.

After things go awry, Bryce loses his AAA rating and his bodyguard license, leaving him a shell of his former self. Just as he is about to accept his fate and give up on his past life and occupation, the wife of Darius Kincaid and international scam artist, Sonia Kincaid (Salma Hayek) signs him on for a job. Darius has been abducted and she needs Bryce to save him. Bryce goes on a mission to save Kincaid, and succeeds, but the two are then kidnapped by Interpol and interrogated. Interpol needs their help to locate a Greek terrorist (Antonio Banderas) who is unhappy with Interpol’s sanctions against the nation.

Sonia now reenters the picture and the trio have a romp around Europe with Bryce consistently getting beaten and tortured. Bryce’s Stepfather (Morgan Freeman) is then introduced and, strangely, even though he is Bryce’s Stepfather he is named Bryce Senior. Bryce Senior and Sonia have a sexual past and it is revealed, apparently, he fell in love with her only to be scammed and left.

Somehow, Senior convinces Sonia to leave Kincaid for him, only to reveal that he is working for the terrorist and kidnaps her. The two frenemies must now work together to save Sonia and kill the terrorist and Senior. Afterward, Bryce is fooled into signing adoption papers that make him legally Darius and Sonia’s son.

After premiering on June 16th for pre-release screenings, ‘Hitman’s Wife’s Bodyguard’ pulled in $15 million over its opening weekend. This is a respectable number, highly anticipated films like ‘In the Heights’ have seen less success, reeling in only $11 million over opening weekend. However, ‘Hitman’s Wife’s Bodyguard’ was unable to crack the week’s top 10 box office draws.

Why is the response so bad?

Well, as stated previously, ‘Hitman’s Wife’s Bodyguard’ is simply and unequivocally just a substandard film in almost every categorizable way. It does have moments of irreverent comedy that work and some relatively good action scenes, but this is not nearly enough to lift the massive burden that is the rest of the film. It is so nonsensical and borderline childish that it’s almost impossible to take anything shown seriously, at all.

The entire film revolves around the hope that audiences find the genuinely inane and juvenile plot structure to be humorous and be willing to look past the derivative and uninspired reality that is the narrative. There are inconsistencies in both the story itself, but also simple things like showing a highway in the UK and magically arriving in the Netherlands. How did a car cross the North Sea, a body of water that is more than 600 miles long?

There is not much else to say, really. The film is not good. The response has not been good. If you want a totally mindless shooter with recognizable stars and a borderline fun time, I would recommend ‘Hitman’s Wife’s Bodyguard,’ otherwise, I would not recommend this to anyone. The film is in theaters now and is available On-Demand.