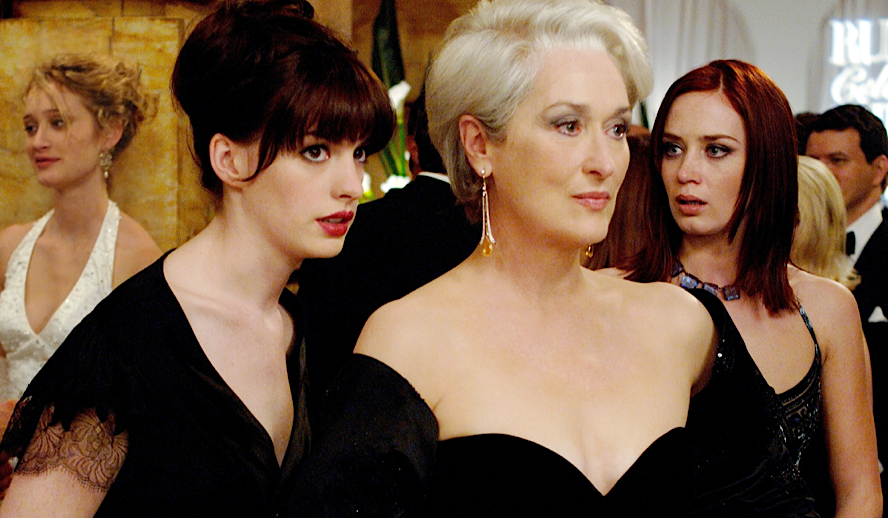 “Everybody wants to be us.” These words were spoken by Meryl Streep’s Miranda Priestly, describing why being an individual in the fashion industry is such a coveted position. Even if fashion was not your passion, ‘The Devil Wears Prada’ captured the interests of audiences all over the world and made everyone feel like a secret fashionista at heart. 15 years following its release, the film still does the same.

‘The Devil Wears Prada’ is based on the novel of the same name by Lauren Weisberger, a former assistant to legendary Vogue editor Anna Wintour, about her experience as the fashion editor’s assistant. The film follows Andy (Anne Hathaway), a new college graduate looking for a job in the journalism industry, and winds up working as an assistant for the editor-in-chief of Runway magazine Miranda Priestly (Meryl Streep) despite constantly ridiculing the fashion industry.

Throughout the film, Andy becomes more deeply involved in the fashion industry and starts to see its negative toll on both her personal and professional life and relationships along with that of some of her coworkers, namely Runway art director Nigel (Stanley Tucci) and Miranda’s executive assistant Emily (Emily Blunt).

The Cultural Impact Of ‘The Devil Wears Prada’

One of the big things ‘The Devil Wears Prada’ opened many people’s eyes to is toxic work environments. Part of why so many of the people in Andy’s life from before her job at Runway leave her during the movie is because she lets her work consume her life; she eventually ends up essentially living to be at Miranda’s beck and call and allows the fashion industry to become her overwhelming focus even when it does not need to be. Andy’s work seeps into every aspect of her life and commandeers it, much like a toxic and abusive relationship. It’s not that the film exposed toxic workplaces to audiences as a new and foreign concept, but it created more of an awakening for audience members to realize that they were in similar work situations to Andy.

As one columnist pointed out in Bustle, “I had a job once where I was in a very similar position to Andy — the instructions were vague, but I was expected to always know what to do and never ask questions. My supervisor frequently chewed me out for minor issues. After-hours asks came pouring in, and I was expected to be available pretty much 24/7 lest my supervisor need help with something. My coworkers were toxic, always ready to steal an idea or tattle on a colleague. It was hell, and I took it, because I was young and didn’t realize that’s not how it has to be.

It was in a competitive field similar to Andy’s fashion industry job… One day, I woke up, lined up enough side work to keep me afloat for a little while, and I said, ‘Enough.’ I realized that giving up my relationships and my personal health wasn’t worth it, similar to how Andy eventually feels in ‘The Devil Wears Prada’. My family and my now-husband were so supportive (which helps when you’re making a hard choice), and quitting is the best thing I’ve ever done for my career.”

The film also propelled all its female stars to even bigger stardom than they had before. For example, while Streep already had two Oscar wins under her belt by this point, this was the film that proved she could draw in a large box office crowd (despite being released on the exact same day as ‘Superman Returns’, the film ultimately made more money in the box office than the superhero blockbuster) and set her up as a lead for future summer blockbuster successes such as ‘Mamma Mia!’ and ‘Julie & Julia’.

This film marked Hathaway’s first adult lead role and proved that she has the chops to carry a more serious dramatic film, skills that would later garner her an Oscar nomination for ‘Rachel Getting Married’ and an Oscar win for ‘Les Miserables’. ‘The Devil Wears Prada’ served as Emily Blunt’s introduction to American audiences where it is safe to say she has become quite the movie darling, taking on harrowing performances in films like ‘A Quiet Place’ to playing one of the most beloved Disney characters of all time in ‘Mary Poppins Returns’ (with an assist from Streep!). While these three women had been acting before this and been rather successful, ‘The Devil Wears Prada’ launched them to a new level of stardom.

The Fashion Industry’s Take On ‘The Devil Wears Prada’

This particular film is one that has people within the fashion industry split on its accuracy of portraying their line of work. Fashion outlet Nylon spoke with several editors and higher-ups at different fashion magazines in 2017 to ask them how accurate a portrayal the film was of their industry and they got quite an array of answers. Landon Peoples, who is currently the Head of Content in North and Latin America for Soho House, said, “For all intents and purposes, I love ‘The Devil Wears Prada’, but it is scarily accurate—even today.

Working in fashion, you’ll encounter every personality represented in that film—the nice ones, the mean ones, the backstabbers, and people who will really help you and want to see you succeed—and, you’ll also experience different working environments similar to the offices of Runway.” Rachel Torgerson, the Fashion Features Director for Cosmopolitan, told them, “I vividly remember when ‘The Devil Wears Prada’ came out—I felt like all the magazines I read were covering it in a can-you-believe-we’re-being-exposed kind of way. The ‘mystique’ of fashion magazines was definitely heightened after I watched it, but I was extremely wary of working in such a competitive environment.”

However, most fashion experts seem to agree that the film perpetuates more stereotypes of what people think the fashion industry is rather than the truths of it. Lauren Caruso, who has worked in a variety of positions for several different outlets, said to Nylon, “I don’t think ‘The Devil Wears Prada’ is an accurate take on the fashion industry at all! Of course, there are long hours and it’s a lot of hard work—and the life of an assistant to someone as powerful and busy as an editor-in-chief truly is nonstop—but it’s not nearly as catty as it was portrayed…

The fashion industry is pretty small—most editors spend time with each other at events, press trips, or working together on content swaps—so generally, it pays to be friendly and professional.” In other words, the general sentiment is that the film was an over-exaggeration of the fashion industry’s worst side and in reality, it is just like most other workplaces… just maybe a bit more stylish.

No matter how accurate a portrayal ‘The Devil Wears Prada’ is, there is no question that it holds a strong legacy as a fashion-forward film with some incredibly iconic lines and characters. The film is timeless and will never leave us asking, “Who are you?”