Al Pacino’s ‘American Traitor: The Trial of Axis Sally’: A Gorgeous Film with A Riveting Story 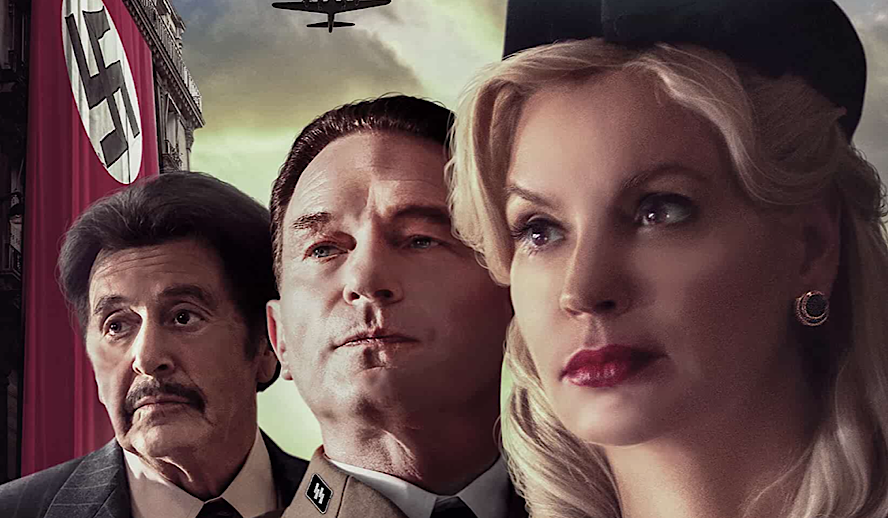 Michael Polish attempts to bring awareness to Mildred Gillars in ‘American Traitor: The Trial of Axis Sally.’ The film tells the true story of Mildred Gillars, an American woman who lived in Germany and was hired as a host for a popular radio broadcast that perpetuated Nazi propaganda to fans around the world. It is based on a book of the same name by William E. Owens. The character that Mildred Gillars would play on this radio show, Axis Sally, would attempt to demoralize, devalue, and cripple American soldiers’ war efforts against Nazis during World War 2.

Related article: A Tribute to ‘Scarface’: The Timeless ‘80s Meditation on Excess and the American Dream | Al Pacino

After America and the allies emerged victorious in the war, Gillars was arrested by United States officials for treason and put on trial, which would have resulted in her being hanged if she lost. It’s a unique narrative that doesn’t get nearly as much attention as other stories focused on the World War 2 era, and has a lot to say about propaganda, freedom of speech, and whether speech should still be free when it becomes weaponized enough to pose a potential danger to anyone around who’s close enough to listen.

‘American Traitor: The Trial of Axis Sally’ – A Gorgeous Film to Look At

‘American Traitor’ has an aesthetic that has a lot going for it. The cinematography is masterfully done and has a feel to it as if Michael Polish went back in time and shot this film in the 1940s with high-quality cameras. It’s a World War 2 museum come to life, the clothes that some of the characters wear, specifically and especially Gillars, give noteworthy performances of their own. Michael Polish also transplants actual footage from the World War 2 era into the film, providing ‘American Traitor’ a raw, more intimate vibe that makes it hit closer to home.

You are reminded this isn’t just a movie you’re watching, this is something that actually took place, and ‘American Traitor’ makes sure you’re never allowed to forget that under any circumstances. The film’s look is possibly one of the movie’s greatest accomplishments, and it knows it, flaunting its confidence nonchalantly with each gorgeous scene. If nothing else, the film’s style is reason enough for any cinephile to give Polish’s movie a nice long gander, because whether it satisfies your appetite for good storytelling or not, there’s no denying it’s at least nice to look at.

The Curious Case of Axis Sally

World War 2 stories are a dime a dozen. The controversy, tragedy, triumphs, and global scale of that historical timestamp in America’s history is often a gold mine for all kinds of storytelling. Directors from Steven Spielberg to Christopher Nolan have all had something to say about the war that changed the world. At the same time, with all the movies, books, and documentaries about World War 2 and Hitler, ‘American Traitor’ stands on its own as a unique premise. Polish’s film glances around the terrain of its own story, peeking at all of the major events that took place in the war and the soldiers who fought tirelessly to defend their countries, but that focus is only tentative to how it has affected Mildred Gillars’ life.

The actual trial and court case is also an enthralling experience as the prosecution battles James Laughlin, expertly played by Al Pacino, in an attempt to make sure Mildred Gillars pays dearly for her “crimes.” The war of words between Laughlin and the prosecutor, played by Mitch Pileggi, is just as fast and tantalizing as watching two armies go head to head in the trenches. The two lawyers come out swinging, and each side makes extremely valid points and criticisms that can sway you if you let your guard down. At times the case is so immersive that you feel as if you’re a part of the jury, deliberating whether or not you should let Gillars hang for her perceived crimes despite knowing the full scope of the story. Axis Sally’s courtroom drama is the highlight of the film and tries its best to elevate the narrative.

Al Pacino Shines Like A Beacon for The Film

Al Pacino is a force to be reckoned with as Mildred Gillars’ witty, seasoned and cynical veteran lawyer. His performance is passionate, rife with vigor and power, and he’s naturally able to meet the intensity that the James Laughlin character demands of its host. Al Pacino is sorely needed in this film, as he almost single-handedly fixes the film’s posture and raises the standard of its quality. The film may be about Mildred Gillars’ exploits, but it really feels like Al Pacino’s movie, as without the momentum he graciously provides ‘American Traitor’ it feels as if the film would stop in its tracks and implode. Meadow Williams is serviceable as Mildred Gillars, aka Axis Sally, but her role has a lot of potentials that both the actress and the material fail to tap into.

Although Meadow Williams, and by virtue Mildred Gillars, eats up most of the screen time, Gillars comes off as a very passive character, which results in Williams herself giving a passive performance. She feels distant, unintentionally keeping the audience at an arm’s length. The events in Gillars’ life are a series of bullet points that get checked off as the series progresses. In one scene she encounters a major conflict, then in the next scene she encounters another major conflict, and so forth without giving Gillars, or the audience, the opportunity to sit with these experiences for a while and let them marinate.

The other characters in ‘American Traitor’ also suffer from a lack of connection and depth. Swen Temmel plays Billy Owen, a young aspiring lawyer who ends up working with the esteemed James Laughlin on the Axis Sally trial. Owen, a nervous, empathetic, yet hopelessly naive lawyer is a perfect foil for Laughlin’s older, cynical but more self-assured personality. But the dynamic between these two is largely shuffled aside, and Owens’ presence in the film shrinks more and more until he comes off more as a prop that Pacino and Williams use than as an actual character.

Thomas Kretschman gives a fine performance as Joseph Goebbels, the Nazi’s chief Propagandist who Gillars worked for. But the performance itself doesn’t ask for much. Goebbels is portrayed as a crude, almost mustache-twirling villain with no redeemable traits for the time he has on screen, with little depth for Kretschman to challenge himself with. The supporting cast, although definitely capable, simply doesn’t have the same screen presence that Pacino’s Laughlin does, which doesn’t necessarily ruin the film, but definitely weakens it a bit in the grand scheme of things.

‘American Traitor’ addresses issues that resonate with the modern viewer. The power behind words, and how those words can be used to incentivize or demotivate a large mass of people is a subject that’s worth viewing through the lens of 2021 and especially the latter half of 2020. It examines the power of free speech and if there’s ever a time where words are harmful enough to justify physical retaliation. And if so, who should be held accountable? And to what extremes? Unfortunately, the film doesn’t really delve into the ambiguity of issues like these the way I hoped it would. It seems to present its own answers to these moral dilemmas as definitive, making the questions it poses come off as more rhetorical than genuine.

All in all, the film is a bit rough around the edges and far from flawless. But at the same time, it’s thought-provoking and has a few moments of brilliance scattered throughout to keep it from being a chore to watch. It introduced me to Mildred Gillars and showed me another angle of World War 2 I knew nothing about, and for that, I consider Michael Polish’s latest film well worth the watch.