The Quiet, Yet Raw Emotional Atmosphere of ‘Ammonite’ with Kate Winslet & Saoirse Ronan as Lovers 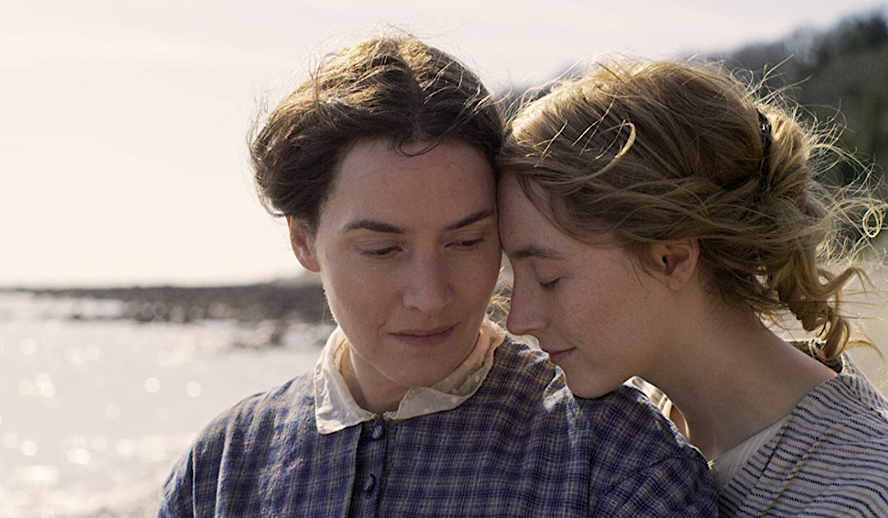 Above all else, ‘Ammonite‘ is a quiet film. The soundtrack is nonexistent, the characters communicate through pauses in dialogue, and the cinematography emphasizes the silence. All of this is done to heighten the film’s realism, a clear priority for director Francis Lee. Ammonite is the story of two women, Mary and Charlotte, who fall for each other in 1840s England, a time where relationships of this sort were strictly forbidden. Thus, the secrecy and society-imposed shame that accompanies the characters’ relationship is reflected in the quietness of the film as a whole.

Both Mary and Charlotte, played by Kate Winslet and Saoirse Ronan respectively, use actions, not words to communicate their affection for each other. Subtle dialogue and a minimal soundtrack are representative of the sexual suppression that the characters’ experience, much in the same vein as Best Picture winner Moonlight. Though on the surface, Ammonite may seem like a lackluster story, the film’s originality lies in its pursuit of a realistic depiction of the forbidden affair. It feels raw and unpolished, leaving the audience just as confused about the nature of the lovers’ relationship as they are themselves.

Without a Score to Guide the Undertones of the Film, Romance Becomes Nuanced

The first notable aspect of this film is the background score or lack of one. There were only two scenes in the film that featured a non-diegetic score, which is a very unusual, minimalist approach to musical composition. The director instead chooses to highlight diegetic sounds, incorporating music into the storyline of the film to use as an indication of tension between the characters. For example, in one scene, Mary and Charlotte attend a recital together. The cellist’s tune colors the background during a moment of ensuing conflict between the two lovers, offering the scene a naturalistic climax. The rest of the audio consists of diegetic sounds that strive to replicate the atmosphere of a small, seaside town in 1840s England.

Crashing waves are often used as a violent transitional sound meant to display the harshness of the coastal environment. The creaking of floorboards and screeching of the wind during a storm also accentuate the brutality of the climate. Francis Lee clearly wanted to juxtapose the cold, unfeeling cruelty of nature, the ocean especially, with the warmth of a budding love affair. Much like complementary colors, the opposite tones of both the story and the setting serve to magnify the tension between the characters, thus intensifying the forbidden nature of the love affair itself.

Another result of the minimalistic score is the opportunity for the audience to form their own opinions about the film’s most important moments. Without a score to guide the emotional undertones of each scene, it is left to the audience to decipher the subtext of the dialogue and the characters’ emotions. The whole thing feels gray, as though we, the viewer, are just as unsure of Mary and Charlotte’s true feelings towards each other as they are. We feel as though we are in the story with them, wondering if each moment of intimacy was real or something we placed misguided importance on. Without a soundtrack, the characters’ emotions become convoluted and muddy, something that is only exasperated by a lack of clear dialogue. But, this confusion and grayness is effective in progressing the narrative because it replicates the characters’ state of mind: their uncertainty about the relationship, as well as the secrecy imposed upon them by social norms of the day.

The secrecy with which Mary and Charlotte approach their relationship is also present in the way that they communicate with each other and the world around them. The women speak very few words to each other throughout the film, choosing instead to show their devotion through simple actions. For example, Mary draws a picture of Charlotte sleeping early on in the film, showing the special regard with which she views her. Charlotte, later in the film, plays the piano for Mary, bringing beautiful sound to her once lifeless cottage. These modest proclamations of tenderness between the women capture their affinity for each other, as opposed to many other romances, which feature grandiose declarations of love between the characters. This lack of tangible and pronounced love leads the film to feel more realistic, as it mirrors the quiet intimacy of real love affairs.

However, it is important to note that without as much dialogue as a traditional narrative film, the weight placed on the actresses to convey their emotions through subtlety is much greater. The non-communicative nature of the film means that Kate Winslet and Saoirse Ronan have to be precise in every movement and expression they make, they have to embody the emotions of the characters in each scene, not simply state them. Both Winslet and Ronan successfully achieve this through their use of body language as a means of communication not just with each other, but with the audience as well.

Silent admiration comes through in eye contact that’s held for just a little too long, lingering touches, and small acts of service such as when Charlotte helps Mary with her cooking. The chemistry between the two actresses is palpable, allowing the audience to fully feel the yearning of the two lovers. A minimal score offers little distraction, allowing Winslet and Ronan’s performances to take center stage. Ultimately, the silence of the film underlines the attraction between the forbidden lovers, making their subtle expressions of tenderness the focal point of each scene.

Lastly, one of the most notable parts of this film was the cinematography, headed by Stephane Fontaine. Fontaine has previously directed cinematography for films like Jackie and Captain Fantastic, in which he has pioneered an intimate, handheld style rooted in close-ups that capture the emotional states of the characters. With Ammonite, he brings the same intimate style of cinematography to emphasize Mary and Charlotte’s closeness. Close-up, following shots are shaky and frequently show the characters’ backs to the camera, maintaining the careful balance between mystery and confidentiality with which we view Mary and Charlotte. Though there are also many instances of close-ups that focus on the main characters’ faces, these are hardly ever straight-on shots.

Instead, Fontaine chooses to use side, high, and low angles to cloud the lens through which we see our protagonists. The iconic Fontaine camera shake is also used intermittently to invoke memories of documentary-style footage, which feels much more raw and realistic than traditional narrative filmmaking. Occasional establishing shots of the setting also help to emphasize the juxtaposition between the natural world and the characters’ love, originally introduced by the diegetic soundtrack. Fontaine’s cinematography serves as a vessel through which Lee indicates the main themes of the story, including the raw authenticity of the hidden love story.

Ammonite Has All the Components of An Academy-Revered Film

On the whole, Ammonite is an intimate portrayal of a relationship rooted in mystery, not direct communication. Thus, the mystery of the characters’ actions, feelings, and displays of affection serve to highlight the sexual suppression of LGBTQ communities in 1840s British society. The chemistry between Winslet and Ronan carries the whole film, aided by performances that focus on subtlety and action, not dialogue. The cinematography coupled with the washed-out, coastal town setting create an atmosphere of restraint and suppression, one that’s only enhanced by Lee’s other creative choices. Ammonite has all the attributes of an Oscar-winning lesbian drama; it is a period film, an LGBTQ romance, and has a uniquely stylistic director focused on creating atmosphere.

Compared to Moonlight and Call Me By Your Name, Ammonite seems to have a fair chance of being nominated this upcoming season whether it be for the fantastic performances or the incredible potent cinematography. Though Lee’s previous film God’s Own Country received no attention from the Academy, his sophomore debut is sure to turn more heads due to the popular actresses attached and the clout Lee gained from his first venture into film. But ultimately, Ammonite takes a fairly simple story and couples it with an intensely intimate stylistic approach to construct a stunningly unique portrayal of a forbidden love affair, something that’s sure to grab the attention of the Academy this Oscar season.