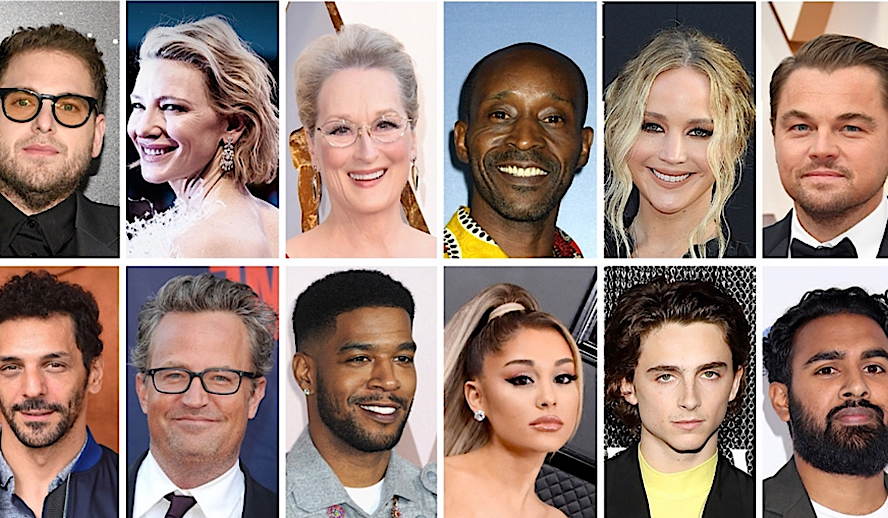 About a year ago, it was announced that Adam McKay is directing an upcoming comedy film, called ‘Don’t Look Up‘. The film follows two astronomers on a media tour as they try to convince the world that a meteorite will destroy the planet within six months. Jennifer Lawrence and Leonardo DiCaprio star as the two astronomers, along with a star-studded cast that includes both upcoming actors and classic stars. So what do we know about the film at this point? And who exactly will be acting in it?

In November 2019, Paramount announced that they would be premiering Adam McKay’s newest directorial endeavor, with Netflix acquiring the rights from Paramount in early 2020. McKay previously directed Oscar-winning films Vice and The Big Short, though those films marked a tangent in the director’s previously rigid comedic filmography. In his early days, McKay frequently collaborated with Will Ferrell on iconic blockbusters like Step Brothers and Talladega Nights: The Ballad of Ricky Bobby. Don’t Look Up, with its star-studded cast and politically satirical plot, signifies a possible collision between McKay’s passion for comedy and political dramas.

An Extended Timeline for Production Due to COVID-19

Filming was originally set to begin in April of this year, but due to COVID-19 restrictions, production was put on hold. However, there’s hope for Adam McKay fans yet! The film reportedly started production in Boston about a week ago. Paparazzi photos captured Jennifer Lawrence and Leonardo DiCaprio at a train station in Boston, looking almost unrecognizable with a red wig and dyed black hair, respectively. Later reports confirmed that Meryl Streep is also in Boston, filming her scenes as President Janie Orlean. The role of the President is satirical and clearly based on an infamous orange-haired man known only as the current President of the United States. Streep has spoken about the role during various interviews, citing that her character chooses to ignore scientific evidence in favor of her own delusions about the world. In an odd twist of events, Jonah Hill plays Streep’s son and Chief of Staff, Jason Orlean. Did someone say Don’t Look Up is parodying the rampant presence of nepotism in politics? I’m looking at you, Ivanka Trump, also known as the Director of the Office of Economic Initiatives and Entrepreneurship.

This past weekend, production moved to the DCU Center in Worcester, Massachusetts to film a rally scene that required the use of a large stadium. Actress Meryl Streep delivers a speech to a large audience, who, due to strict COVID-19 restrictions, will be digitally added in post-production. Location scouts were also seen around the general Boston area, searching for possible filming spots in Framingham and more around Worcester, including the Mercantile Center. With the current production schedule, filming is expected to go until February 2021.

So besides the filming locations and dates, what else do we know about the cast and crew? Well, though we don’t have confirmed roles for each actor, we do have a pretty good idea of what the final cast will look like. In addition to the unique pairing of Meryl Streep and Jonah Hill as mother and son, Timothee Chalamet is set to play an unknown part in the film. The A-lister rose to prominence in 2017 after the release of Luca Guadagnino’s gay romance, Call Me By Your Name. If you’ve already seen the Italian love story, check Timothee Chalamet out in his later films The King, Lady Bird, or Little Women. The latter film pinpoints the first collaboration between Chalamet and Streep, a union set to come to fruition again in McKay’s film. Though we don’t know the details of Chalamet’s part, so it is unclear if he and Meryl Streep will be collaborating frequently on the production or not.

McKay Turns to Musicians to Add Variety to the Cast

In addition to Chalamet, musical artists Kid Cudi and Ariana Grande will also appear in the film. However, all we know about Grande’s character is her name, Riley Binna. For Kid Cudi, we know even less, not even the title of the role he’ll be playing. The famed rapper has previously appeared in the films Need for Speed and Jexi. In Jexi, he appeared only briefly in the film, playing a cameo as himself. Need for Speed, in contrast, is Kid Cudi’s feature film debut, in which he plays the role of Sergeant Benny Jackson, a pilot who’s able to fly small planes and helicopters. The other famous musician (can you believe there’s two?!) in Don’t Look Up is Ariana Grande, known singularly for her work within the music industry. Therefore, McKay’s film marks her theatrical debut. Only time will tell what her role in the film will be and reveal whether or not she has the ability to transition between various entertainment industries.

As if Oscar-nominated actresses and famous musicians weren’t enough for him, McKay is also featuring Cate Blanchett, Ron Perlman, Matthew Perry, and Tyler Perry in his film. Though most of the roles these actors play are unconfirmed in the public eye, we are in for a treat with such a star-studded ensemble. Blanchett has an incredibly impressive filmography, with five Academy Award nominations and two wins. Just in case you haven’t seen it yet, check out her 2015 film Carol, in which she plays the titular character, a married woman who becomes infatuated with a younger girl working at a department store in the 1950s. Bonus: She also served as an executive producer on this production. Ron Perlman, Matthew Perry, and Tyler Perry also have filmographies that need no introduction, with performances in films such as Drive, 17 Again, and Vice.

For fans of McKay’s previous work, which at this point has to be almost everyone, news of Don’t Look Up’s impending production is exciting, but it also represents a push for normalcy in an industry that has been exponentially affected by COVID-19. The production is reportedly filming according to strict guidelines to ensure the cast and crew’s safety, even funding multiple positions on set dedicated to COVID-19 safety. Don’t Look Up is one of the first big, blockbuster films to attempt filming during a pandemic. The result will be interesting, albeit necessary for the industry as a whole. It represents a shift in the production style of Hollywood films, one that has taken months of working and reworking to nail down. Ultimately, Don’t Look Up is a sign of hope in times of uncertainty, a public image of inspiration that we can continue to create even in the midst of a global crisis.