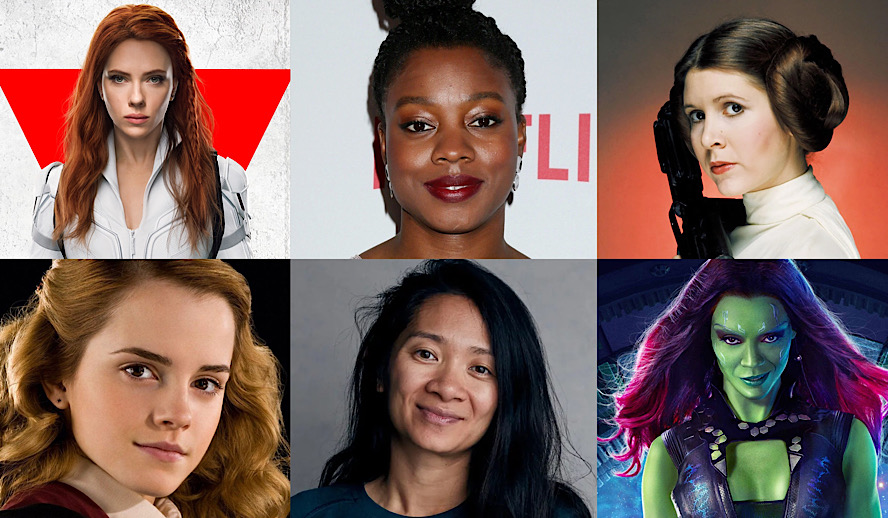 For over a century, we have seen how the film industry has portrayed women in film. Women in film often play stereotypical roles such as the femme fatale, the damsel in distress, the gold digger, among a plethora of others.

As some filmmakers continue to use these stereotypes in their work, some movie franchises are trying to stay away from these outdated stereotypes.

‘Star Wars’, ‘Harry Potter,’ and The Marvel Cinematic Universe have all attempted to allow women to shine in their films. All three of these movie franchises have heavily impacted the role of women in film and the way women are perceived on the big screen.

In 1977, the first ‘Star Wars’ film was released. It introduced us to Leia Organa (portrayed by Carrie Fisher). In her youth, Organa was headstrong, outspoken, and had a strong personality. Unlike the men in her family, she is more like her mother. She never searched for adventure or completed tasks without having a plan first. Organa didn’t have an interest in politics so she wanted to make a difference by helping others.

With the success of the original trilogy, prequels were made. In these prequels, we met Padmé Amidala (portrayed by Natalie Portman) for the first time. Amidala is a compassionate individual and always stands up for what she believes in. She is responsible and strong-willed. She inspired others with her determination and bravery.

As the franchise expanded into prequels, sequels were made to continue the story after the original trilogy. In ‘Star Wars: The Force Awakens,’ we meet Rey (portrayed by Daisy Ridley), a scavenger who lives on Jakku. As she spent most of her life on her own, Rey learned to defend herself and survive. She is generous and goes out of her way to help people in need. Even though she was just a scavenger, she did everything she could to help save the galaxy.

In ‘Star Wars: The Last Jedi,’ we encounter Rose Tico (portrayed by Kelly Marie Tran) for the first time. Rose is very talented because she is highly skilled in engineering and mechanics. She has knowledge about different forms of machinery which makes her an important asset to the Resistance. The character of Rose Tico is significant. NBC News reported that Tran was the first actress of color to be cast in a major role for the movie franchise.

As the franchise expanded into prequels for the original trilogy, more prequels appeared on the big screen. Jyn Erso (portrayed by Felicity Jones) makes her first appearance in ‘Rogue One: A Star Wars Story.’ Jyn had a rough childhood which led her to be rebellious. Erso is calm but cold when having conversations with other people. She can be aggressive and distrusting as she has mostly been on her own since she was a child. Despite all this, she was willing to sacrifice herself to destroy the era of the Empire which showed us that she can be selfless and caring.

In ‘Harry Potter and the Order of the Phoenix,’ we meet Luna Lovegood (portrayed by Evanna Lynch) for the first time. Luna is brilliant in her own quirky way. She is the most eccentric out of the women in the franchise which makes her easily likeable. She accepts herself for who she is and doesn’t care what other people think of her which is admirable. We also get to meet the malevolent Bellatrix Lestrange (portrayed by Helena Bonham Carter) in the same film. While she may be evil and a bit crazy, Lestrange stops at nothing to get things done.

We are introduced to Molly and Ginny Weasley at the very beginning of the movie franchise. Molly (portrayed by Julie Walters) is the mother of Ginny and her six sons. Molly stops at nothing to keep her family safe. Ginny (portrayed by Bonnie Wright) grows up a lot through all eight films. Like her mother, she does everything in her power to keep her loved ones safe.

In 2008, we were introduced to the Marvel Cinematic Universe with ‘Iron Man.’ The MCU’s first films were more focused on the men than the women. This is evident in phase one of the MCU but this does shift as more female characters are introduced in phase two and beyond.

Many of the female characters that exist within the MCU are extremely powerful, physically and mentally. In ‘Iron Man 2,’ we are introduced to Natasha Romanoff also known as Black Widow (portrayed by Scarlett Johansson). Natasha was one of the most talented spies and assassins in the world. She was a founding member of the Avengers. Romanoff is a strong character due to her determination and willingness to put others before herself.

In ‘Captain America: The Winter Soldier,’ we were introduced to Wanda Maximoff also known as the Scarlet Witch (portrayed by Elizabeth Olsen). Wanda is a witch who can harness chaos magic as well as telekinetic and telepathic powers. ‘Avengers: Age of Ultron’ gave us a sense of who Wanda is. Her character goes through a lot of development due to personal losses and the discovery of one’s self. Earlier this year, Maximoff graced our small screens on the limited series, ‘WandaVision.’ The show expanded her character more than we could’ve ever imagined in just nine episodes. Maximoff is the strongest Avenger because of everything she’s gone through. She continued to persevere and grow as an individual.

In ‘Guardians of the Galaxy,’ Gamora was introduced to us. Gamora (portrayed by Zoe Saldana is the daughter of Thanos and the adopted sister of Nebula. Gamora befriends Peter Quill, Drax, Rocket, and Groot by chance. She is very resourceful and organized. The Guardians wouldn’t be the same without her.

We meet Valkyrie (portrayed by Tessa Thompson) in ‘Thor: Ragnarok.’ Valkyrie plays a key role in the film. Valkyrie is independent and likes to take charge. There has been speculation if Valkyrie is a part of the LGBTQ+ community. Gizmodo reported that Kevin Feige, the president of Marvel Studios, confirmed that Valkyrie will have an LGBTQ+ storyline in ‘Thor: Love and Thunder.’

‘Black Panther’ was released in 2018. The film was noted for its cultural significance and introduced us to Shuri. She is the leader of the Wakandan Design Group and an innovator. She is responsible for creating most of the modern technology that exists within Wakanda where she used Vibranium. Some say that she’s smarter than Tony Stark.

Related article: The Ascent of Woman: Amanda Foreman’s Empowering Plunge at the Patriarchy Retells the Erased History of Women

What Has Come from the Creation of These Characters?

The impact that these characters have on fans is astronomical. This is because there are so many kids who watch these films. These characters are ones that girls and young women look up to as role models because of their strength, courage, and determination.

There are some major film companies that are pushing boundaries when it comes to women on the big screen and behind it. The MCU has two women of color directing prominent films for phase four. Nia DaCosta is directing the sequel to ‘Captain Marvel’ and Chloé Zhao is directing ‘The Eternals.’

Along with its first female directors of color, the MCU has two films featuring a prominent female character, these being ‘Captain Marvel’ which came out in 2019 and ‘Black Widow’ which debuts this July. The film will explore Natasha’s past which gives fans the opportunity to see a different side of the character.

Women are changing the Hollywood landscape. IndieWire reported 5 ways that female filmmakers, actresses, and advocates changed the film industry in 2017. Women dominated the box office. The DC superhero epic, ‘Wonder Woman,’ made more than $800 million, The dark and gritty ‘Fifty Shades Darker’ made over $300 million, and the coming-of-age indie film ‘Lady Bird’ made almost $80 million. What do all these films have in common? They are all directed by women and they feature women who play key roles.

Although Hollywood still has much to do when it comes to female representation on screen and behind the screen, the role of women has come far from portraying traditional stereotypes. Women in the film industry have started a revolution because they want to be seen and heard. They want to be represented in an industry that is traditionally dominated by men. It’s time for Hollywood to be more open and inclusive and it’s evident that the industry is starting to stray away from the traditional stereotypes and patterns.