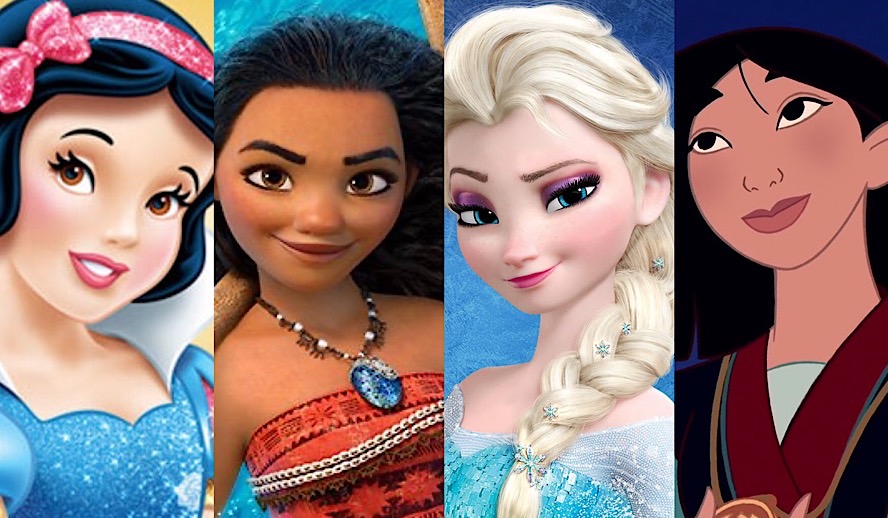 From Snow White to Moana, the Disney princess franchise has evolved a tremendous amount over the years. Representation in the media plays a huge role in how people determine their self-worth, and it is no different for children. The cartoons, animated films, and video games that they consume at a young age, very much have a strong effect on how they view themselves and their image. Due to their still-developing minds, children are among the most affected percentage of the population, by tropes portrayed in the media. Disney princesses are highly influential in the development of how young girls are interpreting their self-worth and body image.

For years, Disney princesses were stuck in the past. They became dependent on a hero. They were dependent on men. In more recent years, Disney has decided to ditch the tired story of women who are helpless and in need of a ‘knight in shining armor’. Instead, Disney is now developing princesses that both children and adults alike can be proud of and idolize. The definition of a Disney princess used to be a young girl waiting for prince charming to come and give her a glass slipper. No longer is this the case. Now, princesses are making a name for themselves, rebelling against societal norms, and teaching all of us a lesson.

Brains And Brawns Over Beauty For New Princesses

Adorned with a bow and arrows, Merida doesn’t care about looking the part, she cares about having the courage to do what others say she can’t. Elsa struggles with her changing powers and calls to the great unknown, not what a prince thinks of her gown. Moana faces her fears of her duty to the water and her family. There is still a magical element to Disney princess movies, but it is obvious that the franchise is entering into more progressive territories. This is a long-overdue move, but if we analyze the newest Disney princess in comparison to their predecessors, they are leaps and bounds beyond what they used to be.

Though they may seem like any other Disney princess, newer princesses are small victories that can stop the perpetuation of uninspired gender norms among the Disney Franchise. It started with princesses like Ariel and Jasmine. They defied their ‘norms’ and decided to take matters into their own hands. While this was true, these two princesses were still hypersexualized and denoted as fragile. Then came the newest era of princesses who took what used to be the standard, and completely threw it out the door.

What the princesses used to represent is more than just beauty and love. They represented the notion that to be the “standard” and fit in, you must be blonde, stunning, and thin.

The perpetuation of this stereotype among Disney princess films highly affects the minds and bodies of the young girls in our world. Because their minds are still developing, it is easier for them to attach themselves to ideas that are presented to them, especially through media phenomena like the Disney franchise. For so long, so many body types, races, and  many more were completely excluded from the narrative of the Disney princess franchise.

What We Have To Look Up To Now

Now with the likes of Frozen and Moana, there are many ways in which Disney princesses are lighting the path to inclusivity and body positivity. Is the franchise perfect? No. However, steps are being made to include all kinds of people in the franchise, for kids to feel seen and represented within the media they consume.

There has never been the prospect of a male suitor for Elsa, and there must never be one. Elsa is a powerful princess with powers that she is still trying to understand herself. Would having a man by her side make her any less great? Of course not. It is the fact that she does not need a prince to make her happy is what is important. The same can be said for Moana and Merida. The whole premise of their movies is not to attain the unattainable prince, but rather to go on a journey of self-exploration.

Why make earning the prince’s affection the goal in princess movies, when instead we can empower all women to grow into themselves and not feel like they are only worthy with a man on their arm. Hopefully, this new decade can see a whole new spread of empowered, educated and vulnerable Disney princesses.

And we have to mention Mulan, the Disney princess that continues to enthrall us. In cinemas on March 27.