Marvel’s ‘M.O.D.O.K.’ Is A Laugh Riot With A Surprising Amount of Heart 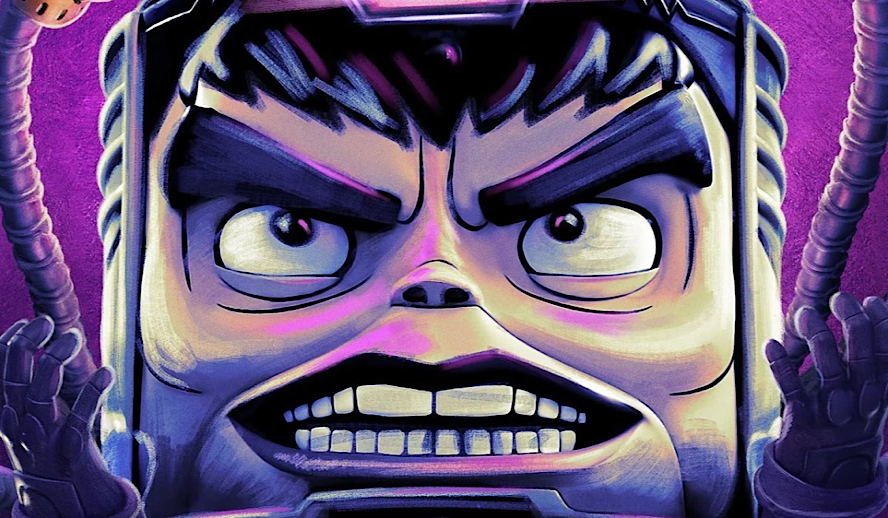 Since the first ‘Iron Man’ movie, Marvel has always done comedy in its superhero shows as good, or sometimes even better, than some of the traditional comedy films that Hollywood trots out. With superheroes that constantly battle against criminals, supervillains, and all-powerful aliens, it relieves stress whenever our favorite Avenger reminds us to laugh right in the midst of harrowing danger. Marvel’s diverse humor is one of the reasons why it’s become the crown jewel of the entertainment industry and Disney’s flagship property; they’re always the life of the party in the superhero genre.

Marvel’s ‘M.O.D.O.K.’, however, shows a different side of Marvel. The new animated series is Marvel when it’s had one too many drinks. It’s punch drunk, unpredictable, and unabashedly comfortable in its own skin. It runs around unaffected by Marvel Entertainment’s PG-13 restrictions, basking in every second of its freedom. And fans of the show will gleefully bask along with it.

Hulu’s new Marvel show follows the supervillain ‘M.O.D.O.K.’, whose real name is George Tarleton, on his endless quest for world domination. Although the premise and style have been seen before, ‘M.O.D.O.K.’ presents you with a new dish that has a familiar taste to it. On the surface, the show can come off as a long-lost ‘Robot Chicken’ sketch, from its simplistic stop-motion animation aesthetic to the overall tone of the show in general. It flaunts the type of look that would fit right into ‘Adult Swim’s and its exclusive Frat House with some of its other raunchy animated shows like ‘Moral Orel’. Apart from its animation, its humor is also recognizable, like we’ve heard the same joke before worded in a different way.

But despite the familiarity of the show, dressing the series up in Marvel wrapping paper actually helped prop up its unique sense of humor. Sometimes the funniest jokes are the ones that hit close to home at the expense of who you personally know, and this series definitely takes advantage of its relation to Disney’s most valuable IP, including even the most casual Marvel fan in many of its inside jokes. ‘M.O.D.O.K.’ isn’t solely reliant on the Marvel brand for laughs, however. It works as both a crass family and workplace comedy, as many of the show’s jokes are tied to the ludicrous hijinks George Tarleton and his employees find themselves in. ‘M.O.D.O.K.’ is determined to prove that it can execute its 10 episode story with a fresh spin on its own merit, without handholding from Marvel. On certain occasions, it proves itself right.

‘M.O.D.O.K.’ being as funny as it is doesn’t really come as a surprise. With ‘Robot Chicken’ architect Seth Green behind the scenes, and comedy legend Patton Oswalt voicing the titular character, it’s a match made in comedy club heaven guaranteed to bring laughter out of even the most stoic audience. ‘M.O.D.O.K.’, however, does surprise in its heart. The Hulu series burdens itself with an unexpected amount of depth, as the supervillain deals with a long-lasting marriage that’s on the verge of falling apart while going through his own journey of self-discovery that he might’ve delayed too little too late in his life. Watching George Tarleton’s life slowly collapse around him, with the supervillain struggling to hold it together with the same hands responsible for its sabotage, is a fascinating and engrossing watch that adds an element of humanity to the aspiring world leader.

Giving ‘M.O.D.O.K.’ some of these everyman problems, coupled with Patton Oswalt’s irresistible charm, lends an endearing quality to Iron Man’s deadly adversary. It turns his insatiable desire for world domination into an amusing character flaw, or a cute quirk that we don’t mind because ‘M.O.D.O.K.’ has finessed his way into our hearts, which, in a way, is much more invasive than taking over the world. Given the nature and personality of the show, it’s an achievement in the writing that ‘M.O.D.O.K.’ successfully flexes as much emotional weight as it does. It doesn’t quite match the same level of resonant and provocative storytelling as DC’s animated ‘Harley Quinn’ series, which in a lot of ways ‘M.O.D.O.K.’ feels like Marvel’s response to, but at the very least it’s striving for storytelling greater than even its own characters warrant.

Patton Oswalt Is The Supervillain We Didn’t Know We Needed

Patton Oswalt is the MVP of ‘M.O.D.O.K.’, and earns his place as the star of the show. The alchemist of comedy, Oswalt turns every line out of his mouth into comedy gold. If a joke doesn’t hit you, his naturally funny delivery makes sure it at least grazes a chuckle out of your body. His tone of comedy is tailor-made for the universe his character is set in, and his voice is such a match for ‘M.O.D.O.K.’ that it’s impossible to imagine anyone else portraying the evil genius. Oswalt, who’s also no stranger to tackling dramas, knows how to scale down the comedy to allow for ‘M.O.D.O.K.’s’ more personal side to peek through.

The supervillain’s ability to portray George Tarleton both when the villain is at his most over the top, and when he’s at his most vulnerable, honors the Marvel nemesis with a layered three-dimensional performance that puts the show above other animated shows with similar DNA. Fortunately, Oswalt is also complemented by a hilarious supporting cast that brings out the best in each other and the best in ‘M.O.D.O.K.’. Aimee Garcia as Jodie Tarleton, George Tarleton’s wife, does a fine job grounding her husband. Her realistic, wholesome goals and attitude serve as a perfect foil for George Tarleton’s extra personality and larger-than-life ambitions.

Ben Schwartz and Melissa Fumero are laugh-out-loud funny as the married couples’ children, and Beck Bennett fits right in with the cast as Austin Van Der Sleet, the owner of the tech company Grumbl. As brilliant as Patton Oswalt is in the role, ‘M.O.D.O.K.’ wouldn’t be the show it is if it wasn’t for the amazing assist from Oswalt’s collaborators, who all put in the work to take Marvel’s latest show to the next level.

‘M.O.D.O.K.’ is submersive in its approach, and subversive in its operation. Aside from the performances and its poignant subplots, the story constantly goes in new directions, taking wild turns sure to keep viewers on their toes. It’s not random for the sake of randomness, there’s a method to ‘M.O.D.O.K.’s’ madness that emotionally rewards fans for their investment. ‘M.O.D.O.K.’ is a solid addition to Hulu’s impressive stable of shows, and it would be a grave disservice to humanity not to renew it for a second season. You can find ‘M.O.D.O.K.’ streaming exclusively on Hulu.