A Review of the Entire ‘WandaVision’ Series: Marvel’s First Swing at a Disney+ Series a Hit 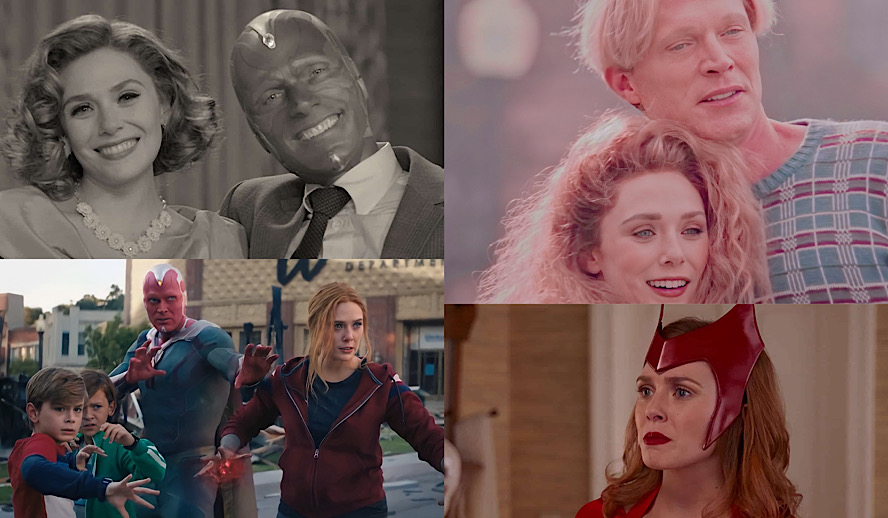 A Walk Down Memory Lane

After hits like Lucasfilm’s ‘The Mandalorian’, Kevin Feige and the team over at Marvel Studios have had their first success on Disney+ in their latest project. ‘WandaVision’ follows heroes Wanda Maximoff and Vision, portrayed by Elizabeth Olsen and Paul Bettany respectively, as they slowly realize something is amiss in their newfound suburban life in the quaint town of Westview all through the lens of a classic, nostalgic sitcom.

This remarkably original and deeply emotional nine-episode season is emblematic of how the Marvel Cinematic Universe has been so successful. The show unites laughs, mystery, and heart in this poetic love story between Wanda and Vision. Yet again, Marvel has flexed their creative muscles and crafted a compelling story starring our favorite superheroes within a sub-genre. In the vein of Peyton Reed’s heist film, ‘Ant-Man’, and Joe and Anthony Russo’s spy-political thriller, ‘Captain America: The Winter Soldier’, Marvel has tapped Director Matt Shakman and Head Writer Jac Schaeffer to create this superhero-romance in the family sitcom medium. ‘WandaVision’ was a joy from start to finish, and while not always the smoothest ride, there is enough to satisfy both sitcom lovers and MCU fans. While this review is spoiler-free, I do recommend going into the show as blind as possible to get the most enjoyment out of it.

As Seen On Tv

In my opinion, the biggest reason ‘WandaVision’ works is its commitment to its medium. From the very first episode, it is clear to see how dedicated the filmmakers are to fully immerse the audience in this sitcom world. The show bounces between ears of sitcoms, first with paying tribute to 50s and 60s shows like ‘The Dick Van Dyke Show’. The first few episodes are shot completely in black and white and filmed in front of a live studio audience. The creators shoot the show in the sitcom-style as well, with shots all coming from one direction looking into the set as if we are in the soundstage audience.

As the show moves through the eras, ‘WandaVision’ pays respects to the evolution of sitcoms. The classic fourth-wall breaks of ‘Malcolm in the Middle’ are implemented, as well as the ‘Modern Family’ mockumentary style of contemporary sitcoms utilizing talking heads and shaky-cam shots. Several of the episodes include an era-specific commercial at the midpoint of the episode, advertising for hilarious fake products. The reason why the sitcom framework works so well is that it does not just act as a gimmick, it serves the story.

The show is enhanced by the sitcom structure — my only gripe with it is that because of the show’s commitment to its medium, some episodes feel cut short. Most of the episodes come in around or below the thirty-minute mark which, especially in the first couple, make you yearn for more after the credits roll. Luckily, this longing for more content is a good problem to have and the runtimes of the final episodes were extended to let the episodes breathe and give more time for our stars to interact.

‘WandaVision’ would be nothing without the all-star performances of Elizabeth Olsen and Paul Bettany. The odd couple’s chemistry is as strong and dynamic as ever. The progression of their relationship since ‘Captain America: Civil War’ is on full display and it is the two of them that guide you from scene to scene. Olsen is deeply emotional in the show, many times pulling at the audience’s heartstrings more effectively than I had expected. Wanda’s tragic past and how it has affected her is explored and grounds the show, giving it a substance that feels true and honest. Paul Bettany as Vision is delightful as ever, acting as a conduit for the audience while also providing many of the laughs of the show. Despite being a machine, Vision is one of the most human characters in the show and I really loved how that was explored.

The supporting cast is also phenomenal. Kathryn Hahn plays Agenes, the classic ‘nosy neighbor’ to our heroes. Hahn portrays Agnes with the perfect balance of camp and seriousness to fit seamlessly into both this oddball sitcom and the MCU world. Another standout is Teyonah Parris, who plays Monica Rambeau. Without revealing too much, she is another character that will endear you with her arc. Like Vision, Rambeau is a conduit for the audience to learn information and many prospects of her story will excite MCU fans for the future. Some familiar MCU faces that pop up are the duo of Randall Park’s Jimmy Woo and Kat Dennings’ Darcy Lewis — both of which steal every scene they are in with their quick, witty, MCU dialogue that I have yet to get tired of.

A Case of the Mondays

With any film, show, or series, there are strengths and weaknesses — in the case of ‘WandaVision’, both come in the writing. There are a lot of really interesting elements to be had in the writing of the episodes, specifically a commentary on perception. There are subtle hints of examining how we perceive our world and how we are perceived by others, especially when it comes to the antagonist of the show. After a full viewing, there is an argument to be made as to who the true villain of the story was which is a fascinating concept. The issue is, ‘WandaVision’ just scratches the surface of it instead of diving into the concept further. The writers deserve all the credit in the world for proposing the idea, I just wished that they had taken it a step further and really fleshed it out.

The show is undoubtedly one of the most original pieces Marvel has ever produced, each episode feels tonally consistent to its sitcom feel and the era it currently resides in. The dialogue also mirrors the time period that it is paying homage to. One thing that did bother me, however, is a sort of fake-out they do with a particular character towards the end of the season. I couldn’t help coming away from that arc feeling underwhelmed. The season finale of the show does feel like a classic Marvel finish which may let down some who praised ‘WandaVision’ for its freshness. In spite of this, I still enjoyed the conclusion of the show and expect others who have been fans of the MCU to also find it to be an entertaining enough end to the show.

‘WandaVision’ may be the most unique and daring project Marvel has ever put onto screens. With exceptional performances and lovable characters, the show keeps you guessing, laughing, and tearing up through all nine of its episodes. While it doesn’t finish as strong as you might hope, ‘WandaVision’ is one of the most enjoyable shows to stream right now. Being Marvel’s first attempt at a streaming series, the future looks bright for fans of the MCU and subscribers to Disney+.

Related article: Everything We Know About ‘The Falcon and the Winter Soldier’: We Give You the Next One, as ‘WandaVision’ Concludes

Stream ‘WandaVision’ today on Disney+. You can check out Marvel’s next series in ‘The Falcon and the Winter Soldier’ when it premieres on March 19th also on Disney+.

Elizabeth Olsen will appear as Wanda alongside Benedict Cumberbatch in ‘Doctor Strange in the Multiverse of Madness’ slated for a 2022 release. Stream Paul Bettany’s latest film, ‘Uncle Frank’ on Amazon Prime Video.