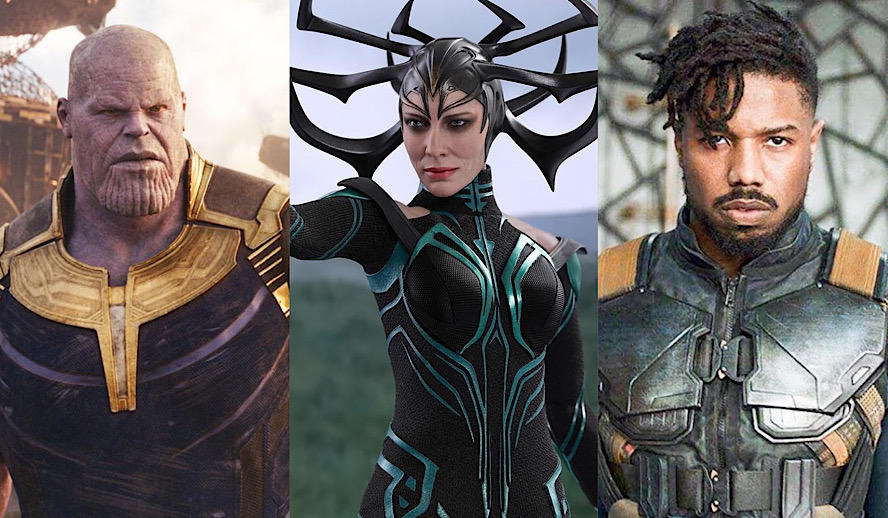 Marvel is the studio of big superheroes, big budgets, and an even bigger box office. Since Phase One was kicked off with Tony Stark looking straight into the crowd and speaking the now-iconic words, ‘I am Iron Man,” an utterly unstoppable franchise was kicked off, stealing the hearts of comic book nerds and fans of epic movies alike. While Marvel no-doubt nails its heroes clad in tights and capes or in the Hulk’s case just rocking a used pair of purple gym shorts, its villains are famously known to be hit or miss. But for every drunken fumbling Mandarin who is really just a glorified theater school dropout, there’s an epically diabolical Thanos.

So today we honor the best of the Marvel Villains with the top five villains of the MCU.

The writers of ‘Thor Ragnarok’ seemed to be obsessed with villains sporting epic headdresses. Hela’s ability to rock a pair of jet black antlers like it’s nobody’s business is only part of the reason why she’s on this list. The goddess of death is utterly ruthless in her quest to bring death and fulfill the prophecy of Ragnarok which would mean the destruction of the kingdom of Asgard. It’s even more terrifying that she seems to have no emotional drive other than desperately wanting to wreak havoc. The entire kingdom of Asgard tries to fight her off but the more people who challenge her, the more people who die. Hela shows no remorse in her quest to bring about Ragnarok and will stop at nothing to achieve her goal.

Fun fact: Nazis are scary. And a guy who thinks Hitler is not going far enough is downright terrifying. Red Skull tricks us into thinking he’s just a normal guy with a love for genocide by masquerading as Johan Schmidt. When Schmidt tries to unveil his plan to advance Germany’s world domination, even the Nazis in the room think that he should take a chill pill. So he murders them all and goes on with his plan. He is the first MCU villain to harness the power of an Infinity Stone, namely the Power Stone, to carry out his evil deeds. But, of course, the eviler the baddy the more horrible his fate, and Red Skull is sentenced to guard the Soul Stone on Vormir for the rest of eternity and he can’t even touch it.  From Mega-Hitler to personal security guard for a shiny stone; seems like a fitting punishment.

Agatha makes it onto this list not only because she’s the only Marvel villain with a diabolically catchy theme song, although that is a large part of the reason why she’s on the list. No other Marvel villain has been devilish enough to get a number one song on iTunes. While it is particularly vile to get a song stuck in innocent people’s heads, Agatha is so sinister because for the majority of the first season of ‘Wandavision,’ she appears to be utterly harmless.

She daylights as the snarky sitcom neighbor, a regular Kimmy Gibbler to Wanda’s Tanner family. It’s not until episode seven that Agatha reveals her true colors as a sinister witch from Salem. Agatha holds a mirror to Wanda and shows her all the pain and horror she has caused for the residents of Westview. She is the element of self-awareness that Wanda so desperately needed. Also, while all Marvel villains are sinister, none of them have been dastardly enough to kill a dog. Now that’s cold-blooded.

Killmonger has led a tortured life from the get-go of ‘Black Panther.’ He was abandoned by the Wakandians in Oakland, CA after T’Chaka killed his father. Theoretically, Killmonger should’ve been a member of the Wakandan royal family but instead, he’s forced to make his own way in life. The reason why Killmonger is such a great villain is that we all kind of get where he’s coming from. He’s lived his life in the outside world far away from the utopian Wakanda and has seen the atrocities humanity has committed against Black people first hand. He wants to help out his Black brethren around the world while the policy of Wakanda is to remain isolationist.

The problem lies in the fact that he will go about achieving his goals for Wakanda by any means necessary, including killing King T’Challa, so he can take over the throne. Killmonger seems to be a metaphor for the younger generation of Black people in the US and around the world who want to achieve social change despite the more traditionalist people represented by T’Challa who are more hesitant to change the way things are and have always been. Unfortunately, Killmonger wants to go about this radical change by inflicting violence which is what causes the conflict in the movie. This dynamic between T’Challa and Killmonger makes it one of the most powerful hero/villain relationships in the MCU.

And finally, we arrive at the big purple baddy-turned J-Crew T-shirt wearing farmer. From the first image, we get of Thanos in the post-credits scene of ‘Avengers: Age of Ultron’ when he puts on the Infinity gauntlet and after Ultron failed to bring about the end of humanity says, “fine, I’ll do it myself,” we know he’s scary. He just gets scarier from there. Thanos’ goal is to wipe out half of all life on Earth to bring about new prosperity. Theoretically, a humanitarian goal if the humanitarian also was into mass murder. Thanos takes around a legion of minions who creepily call themselves “the children of Thanos.”

He will stop at nothing to bring about his global decimation. He, in a strange way, acts as a uniting force for The Avengers after the events of “Captain America: Civil War.” After the Sokovia Accords left the team in tatters due to moral disagreements, Thanos led the Avengers to reunite over one massively powerful and massively evil enemy.