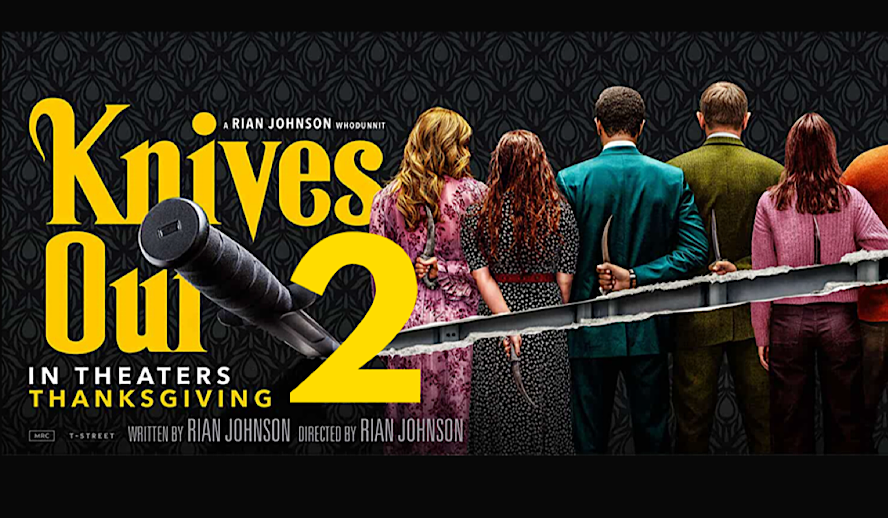 As recently as May 20th producers have been teasing new additions to the already talented pool of characters joining the upcoming Rian Johnson production ‘Knives Out 2.’ Around 10:00 am on May 20th, Kate Hudson was reported to have accepted a role in the sequel to the massively popular film of the same name. Hudson, most known for her role in the year 2000’s ‘Almost Famous,’ is but one in a string of big names dropped in recent weeks as being included in the upcoming project.

A star-studded affair and with only six characters thus far, it would not be out of the question that more big-name talent is coming soon. Based on the last film, which featured a family undergoing the death of the patriarch and the monetary fallout incurred, the current cast certainly has more room for growth. And with respect to the previous iteration, one very interesting factor to consider with these announcements is that these are new characters. Meaning, we will likely be getting a generally unrelated narrative to the first picture as the only recurring character will be Daniel Craig’s Benoit Blanc, the investigator. This stipulation is very telling for the overall structure of the upcoming project.

‘Knives Out 2’ – Social media took it and ran

Social media, particularly Twitter, is a beautiful creation. The platform allows for a degree of communal intersectionality once thought impossible. What is most interesting about social media is the ability it affords to gauge overall audience sentiment of something, be it content, art, philosophy, anything recognizable to human cognition. Twitter, specifically, represents the town square. I say this in the sense that the town square represents the gathering place for people bound within one geographic place.

In the modernized version of the town square, people are no longer bound together by location but rather based on their interests. This allows for a uniquely pooled data set where people are able to filter through opinions, be it critical or supportive, that before the invention of social media, would’ve cost millions of dollars to produce and silo. This inordinate amount of immediately accessible data represents one of the quickest and most responsive representations of overall human sentiment on Earth.

With social media, you will find a homogeneous assortment of characters young and old, of every race, gender role, belief structure, and perspective on life, but what is so truly breathtaking is the correlation of perception on topics between unlike people. Because people in the modernized town square are able to convene according to interest, we are presented with a beautiful dichotomy of individual users. Although the users may be different in every other humanly categorizable way, they still are able to come together and agree over something as simple as an interest in a film.

With that being said, the general reception of ‘Knives Out’ was very well received. It was a resounding success, most everyone on the platform, more directly, its FilmTwitter subsect, lauded the film as one of the best movies in recent years. So, going into the announcement of the impending sequel, morale was raised even higher, generating enormous buzz within the film community on Twitter. From here, the studio released nearly daily updates on cast inclusions, so many in such a short time that many users found it, frankly, comical. Quickly, the most creative of the bunch started making fake (jokes) announcements of random people, actors, or characters inclusion in the ‘Knives Out 2’ cast. The hilariousness of this meme and its relevance to a huge topic in modern cinema was a recipe for a worldwide transcendence not usually applicable to social media trending topics.

This is to say, the average lifecycle of a meme is about a day. After the publication of the first meme that generates widespread buzz, the joke dies off within about 24 hours as it becomes overused and derivative. Because the ‘Knives Out 2’ buzz was based in a community that supports the actual concept, it became contextually funny in far more situations than most other “jokes.” So, the first joke about the ‘Knives Out 2’ cast was made and reiterated a number of times, but it wasn’t becoming stale. At least, not at the rate most flash-in-the-pan memes do. This led to one of the most used interaction formats on film social media in recent years generating millions of interactions worldwide. It’s safe to say social media sentiment is very positive regarding ‘Knives Out 2.’

Should we manage our expectations?

Yes and no. I do believe that the extreme levels of buzz surrounding the film are warranted. Rian Johnson had massive success with the original and critical acclaim for 2012’s ‘Looper’ and, all publicity is good publicity, even the volatile and tumultuous world of ‘Star Wars’ fandom. Johnson’s rendition of ‘The Last Jedi’ is a hotly debated subject, especially on social media sites like Twitter. So no, I do not think the excitement is unwarranted.

However, I do think we should manage our expectations on what kind of product we will be receiving with ‘Knives Out 2.’ If you are going into this film hoping for a direct sequel to the original you will likely be disappointed. As previously mentioned, the cast is new, for the most part. What this means to me is, the structure will remain largely the same, but the thematics and concept will be fresh and new. We will still be in the middle of a classic whodunit with Craig’s Blanc to lead us, but everything else will be original.

I think this is an opportunity to use a technique similar to how ‘The Haunting of Hill House’ handled its second season with ‘Haunting of Bly Manor.’ We will likely see a new investigation that revolves around some moral fallacy and its implications very similarly to the first, but this is just the base idea of the larger film. It is the frame of the vehicle, the axles and wheels to the new concepts body and detailing.

Should I see this film?

Yes, of course! No matter if a film is good or bad, you should give it a chance and appreciate it for what it is, always. Aside from my white-knight appeal to the artistic integrity of all original works, you should see ‘Knives Out 2’ based on its merit, as well. In a social media world where anything can have 15 minutes of fame, it’s very hard to stretch that 15 minutes into hours, days, even years. But that’s exactly what ‘Knives Out’ has done and, if anything, that is a testament to the quality of the work, itself.

If you didn’t love the original, fret not, the concept will likely be a reimagination and we already know we’re getting a whole new cast, so, why not give it a try? There is no release date yet for ‘Knives Out 2’ but it is expected to release sometime in 2022 on Netflix, so put it on your watch list and keep it in the back of your mind until the day comes.