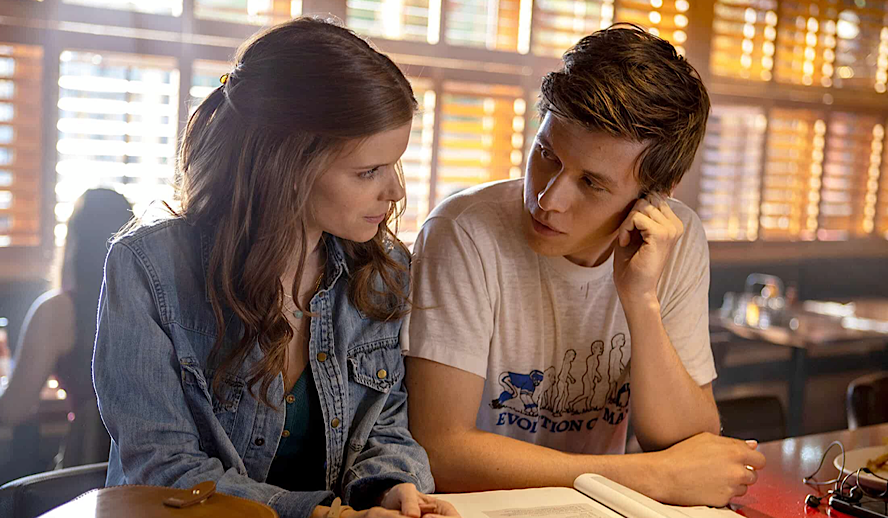 Hollywood has an ugly history of depicting intimate relationships in very problematic ways. There is a long list of movies and TV shows that have depicted toxic relationships as something to be desired, such as Suicide Squad (2016), Sex & the City (1998-2004), and Fifty Shades of Grey (2015). The industry has been facing a lot of backlash on this issue, especially after the rise of the third-wave feminist movement. Additionally, a deeply problematic niche in this category is the depiction of student-teacher relationships. They have been perceived as glorifying abuse and making them seem like an attractive and exciting “forbidden love.”

The latest show to face similar backlash is the new FX on Hulu series A Teacher. It stars Kate Mara as Claire, an English teacher who has an affair with her student and SAT tutee Eric, played by Nick Robinson of Love, Simon (2018). The show is based on the 2013 movie by Hannah Fidell, who is also part of this production. Its executive producers include Kate Mara and Jason Bateman. The show has aired four episodes so far, almost reaching the halfway point of a ten-episode season. Does it deserve to face similar backlash as compared to other shows?

Related article: ‘Moonbase 8’: A Must-Watch For Any Fans Of Space, Comedy, Or Simply Quality Television

A brief history of problematic student-teacher relationships in entertainment

A fascination with student-teacher relationships has always existed, which has manifested in entertainment content in controversial ways. Everyone’s favorite sitcom Friends depicted and condoned a predatory relationship between Phoebe’s teenage brother Frank and his 44-year-old home economics teacher Alice, which was shown with a comedic tone. Fast forward to the 2000s, student-teacher relationships dangerously trickled down to teen TV shows. The popular drama One Tree Hill depicted Brooke Davis dating her English teacher Nick Chavez (why is it always English teachers?). The O.C., another highly popular teen show, showed a relationship between a student Taylor Townsend and her teacher Jack Hess, who was ironically the Dean of Discipline at the school.  One of the most popular and culture-defining teen shows ever is guilty of this offense as well: Gossip Girl. It depicted multiple such relationships between students and teachers as romantic connections. Mean Girls (2004) also used the plotline of Coach Carr who slept with multiple female students as a light-hearted joke. This phenomenon continues on seemingly without an end, with the most recent addition being a relationship between Ms. Grundy and Archie in the wildly popular teen show, Riverdale (2017 -).

The worst offender in recent memory has to be Pretty Little Liars. This popular teen show gave rise to one of the most followed and admired pairings amongst teenagers: Aria and her English teacher (yes, again) Mr. Ezra Fitz. The way this relationship was handled has to be one of the most problematic of such offenses in the current times. The showrunners were fully aware of the fan following of the couple dubbed as “Ezria.” They decided to capitalize on it and in turn, normalize such a relationship further. The showrunners ended up promoting the show heavily using the couple, instead of issuing warnings against such behavior. They also released merchandise with “I heart Mr. Fitz” on it, regularly worn by underage girls.

One particularly dangerous element of these depictions is that they only emphasize these relationships as legally wrong, instead of psychologically and emotionally damaging. All of the possible legal repercussions are used to add to the thrill of the relationship, making the couple some sort of star-crossed lovers who the big, bad world is trying to keep apart. A problem with such depictions of these relationships is, as previously mentioned, that they are portrayed in shows meant for teenagers. Teenagers are more susceptible to internalizing the bad messaging they see on screen rather than adults since their frontal lobe, the part of the brain that controls critical thinking, is underdeveloped. Social factors such as peer pressure also play a huge part in affecting teen behavior. If sleeping with a teacher is portrayed as a romantic and exciting scenario rather than abuse, this messaging is very likely to come across to this impressionable group as a real-life perspective.

Now, what is the verdict on A Teacher’s portrayal of this controversial topic?

The series is based on Hannah Fidell’s 2013 movie. The movie had faced criticism for being a hollow portrayal of such relationships. It had an indie production and “feel” to it which made the relationship feel like a vicarious thrill. Given that the series runs longer than the 75-minute long movie, this is an opportunity to expand on the story and give more weightage to the psychological harm such a relationship causes rather than the thrilling nature of it.

Analyzing the series itself, it is off to an interesting start. The start of the sexual relationship took three whole episodes. The teacher and student were shown to meet after hours seemingly innocently on the pretext of SAT tutoring, which slowly led to the blurring of professional boundaries. Fidell, who is a survivor of sexual assault herself, worked with a number of therapists to ensure that her script depicts a realistic portrayal of how grooming works, and how the abuser systematically breaks down the victim’s defenses. In addition, Fidell worked with the Rape, Abuse and Incest National Network (RAINN) to create appropriate content warnings as well as compile relevant crisis resources for viewers. Despite this, the relationship still has elements of suspense and excitement in the episodes aired so far. While the show creator’s aim is to shine a light on such predatory relationships, there are still commercialized fantasy elements to keep the viewers entertained. One perspective could be that some commercialized elements are required to hold the interest of the audience, since the main aim of any network production is to increase viewership and make money. Another perspective is that perhaps they are emphasizing the initial exciting nature of the relationship to connect the viewers with what the involved people feel during the initial phase. As the relationship progresses, the negative effects of such a relationship will manifest until it ultimately blows up.

One thing the show has going for it is that it is strictly TV-MA. The show is created and directed towards a more mature, adult viewership. They have a clear advisory warning at the beginning of each episode, with a link to crisis resources for people who may be suffering such abuse. One discrepancy with this messaging though is the choice to cast Nick Robinson as the student. Robinson is wildly popular amongst teen girls, gaining fame by playing Simon in the popular teen romance movie Love, Simon. It is a very plausible assessment that teenage fans of Robinson will watch the show even if strictly speaking, they are not allowed to. It is also very plausible to assume that the showrunners knew of this possibility as well. This could potentially expose them to harmful rhetoric that they are not old enough to process correctly.

The one way this problem is solved is that if this series does not commit the fatal flaw of all the other previously mentioned series did: portray this as a doomed relationship rather than clear-cut abuse. The movie did end up committing this fatal flaw, as the angle of the story portrayed the teacher as an obsessive lover rather than an abuser. The final scene with the teacher curled up in bed crying about the unraveling of her life focuses more on the life consequences on the abuser, rather than the psychological damage to the abused. If the series commits a similar flaw in its climax, it could be headed for dangerous territory. However, there have been some deviations from the movie in the show so far, making it quite plausible that it is taking a somewhat different direction than the movie. If the latter half of the show focuses more on the harmful effects of this relationship on Eric, the student, it will have a much higher chance of being credible in its intended messaging. The jury is still out and deliberating on this particular series.