Does Attraction Have A Racial Preference?: Hollywood’s History of Telling Us Who is Sexy 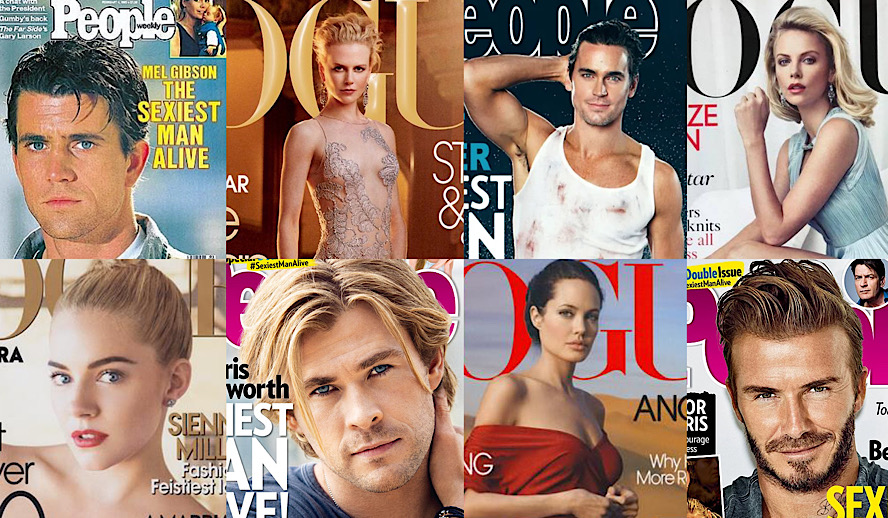 Dating preferences are not new and not scarce, in fact, most people have a type. Whether it’s the artsy type, sporty, geeky, the skater, the theatre nerd, the “film major,” the fashionista, etc; it’s normal and acceptable to be attracted to people with whom your interests or aesthetics align. Although, preference or “type” gets taken a step too far when it is extended to somebody’s race, ethnicity, or culture. Yet, we hear it all the time. Whether it is someone saying that they are not attracted to a certain race, or saying that there is one specific race that they are only attracted to, racial preference in dating is, unfortunately, common.

That being said, as much as people may want to think their biases are unique to them, I am here to tell you that they are absolutely not. In fact, they are not even your own original thoughts or feelings. Since before you can remember, you have been fed a narrative, a narrative of who is attractive and what that attractiveness looks like; it’s all over the place. From the people in the corner of your textbooks to the people on the big screen and everyone that is shown to you and paraded to you in between, you have been told who you are going to end up liking since way before you met them.

It would be easy to write about attractiveness from the viewpoint of the white gaze and disregard other races and ethnicities, but Hollywood has already done that for me. While there are many TV studios, movie studios, and publications that are led by and for certain marginalized groups, like BET for the black community, Cine Latino for the LatinX community, and so on, those groups, much like their culture in the aspect of American population and sovereignty, are in the minority. In terms of television, perhaps the most accessible form of content in the 21st century, many of these aforementioned cultures do have their own channels with their own protagonists and antagonists that look like them and give them intersectional characters that they can relate to.

That is the bare minimum, but in actuality, these smaller companies, studious, distribution houses, etc., are never going to size up to the big players like NBC, Lionsgate, or even mainstream streaming services like Netflix or Hulu which are white-run companies. These companies are meant to apply and speak to each demographic and psychographic, but, in the history of their content, they’re mostly speaking to one audience, the white audience, and they do so by showing them people just like them. But it does not just stop at filmed media.

Choosing the Same Look Over and Over Again

Every year, People Magazine releases a special issue where they feature on the cover who they deem to be the “sexiest man alive.” The choice for who this is, relates to their level of fame, usually during a specifically successful year in their career, and of course, someone who fits with the seen trends of what Hollywood has shown to be what attractive looks like. This can be determined through who they have mostly cast in love-interest roles and roles that heavily rely on the actor’s sex appeal, and People’s choice reaffirms this look that Hollywood has crafted.

People Magazine has been naming the sexiest man alive since 1985 when they chose Mel Gibson. Since then, out of the next 35 years and 35 sexiest men alive, only six of them have been men of color. Not surprisingly, four out of six of those have come in the last five years. This means that readers and anyone who follows the entertainment industry even loosely, born before 2016, have only seen two men of color be praised for their beauty at this high level: Keanu Reeves in 1994 (though he was named winner in 2015) and Denzel Washington in 1996.

Furthermore, according to the Richest, the top ten highest-earning actresses from 2010 to 2019 were all white women. Scarlett Johansson secured the top two spots, earning an estimated $40.5 million in 2018 and $56 million in 2019. The highest-paid actresses and the sexiest named actors can be assumed to have been on the big screen a fair amount in their prime years. Hollywood doesn’t mind paying for sex appeal because they know that sex sells.

The problem is, the brand of sex that they are selling is repetitive, it is bland, it is different fonts of the same person. We have been shown different versions of white attractiveness ad nauseum and the amount of toxicity and lack of self-love that falls into every other ethnicity because of that is irredeemable. Imagine not being able to see anyone that looks even remotely like you being praised for their beauty at a high level; that can lead one to doubt one’s own beauty and the beauty of the people around them, and that effect is cruel.

The Stage Has Been Set, But Now’s the Time to Change it

As much as we may not like to admit it, attraction breeds respect. Hollywood tells us who we should give ourselves to physically, emotionally, romantically, and for the past 40 years, it’s mostly been the same looking people. If we can’t picture our lives or our beds with anyone of a minority race, how can we give them the respect they deserve?  While other races have been fetishized and exploited in mainstream media for the way they look, white and white-passing actors and actresses have built respect and been aggrandize for their genetics.

Thankfully, this is changing. Representation is taking over and diverse stories are being told and respected by a mass audience. In 2016, People’s sexiest man of the year was Dwayne Johnson, followed by Idris Elba two years later in 2018, then John Legend in 2019, and Michael B. Jordan in 2020. People Magazine has not only honored actors of color but has shown a lack of colorism, recently naming light-skinned and dark-skinned actors alike.

This year, I hope they name someone of national origin or race that they have not represented in their history and someone who is having a career year. My top choices would be Steven Yeun of Oscar-nominated ‘Minari,’ Kumail Nanjiani of Marvel’s upcoming ‘Eternals,’ Riz Ahmed of Oscar-nominated ‘Sound of Metal,’ or Anthony Ramos of Lin-Manuel Miranda’s upcoming ‘In the Heights.’ While I truly hope mainstream media can represent actors from diverse and international backgrounds, men are by no means the only figures of chosen attractiveness by the Hollywood system.

When Forbes named the highest-paid actresses of 2020, the list showed some progression from the years prior. Two out of ten of the women named, Viola Davis at number ten and Sofia Vergara at number one, were women of color. Two does not seem like a big number, but it is higher than zero. As the next generation of entertainment audiences grow up admiring the content that we will similarly admire, let them see all types of people in every role. Let them understand and know that your genetics and your race and your skin tone should not dictate what you can become, or how attractive you are seen to be.

Anyone born before 2016 already has a predisposition to see white figures as the epitome of beauty. It is an active choice one has to make every day to respect other cultures. To watch TV from diverse networks, to go see international films, and to follow models and beauty icons of minority backgrounds is to immerse yourself in the heterogenous beauty of the world. It is too much to ask the entertainment industry to do this for us, so take a step away from what you’re shown and make your own path to figure out what you perceive as your own standard of beauty. It’s up to us, and the rest will follow.