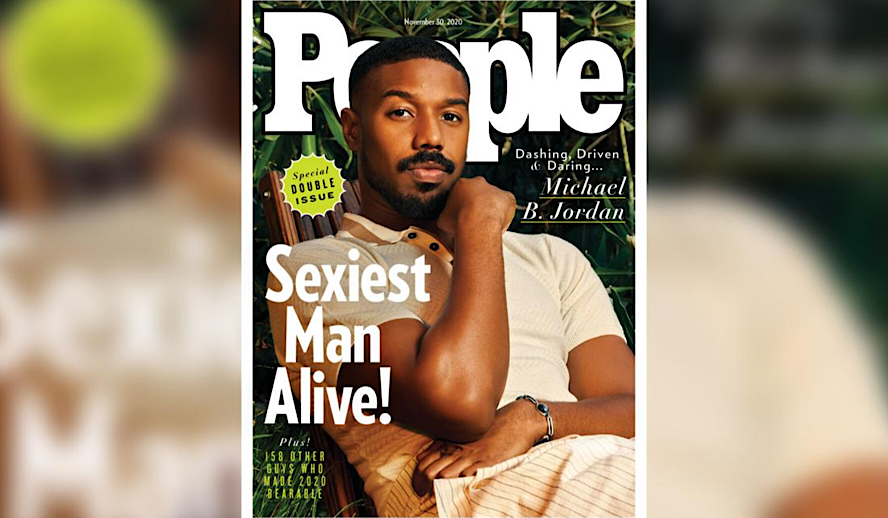 The now 35-year-old tradition of People Magazine’s “Sexiest Man Alive” cover has Michael B. Jordan as their most recent iteration. His cover makes three years in a row that a Black man has graced the cover of the renowned magazine. However, don’t get confused. People has only elected 5 Black men for the cover (and no other men of color besides Dwayne Johnson, who’s also Polynesian) as their sexiest man alive. So what precisely can we learn about America’s values by observing why People Magazine almost never had a man of color grace their “Sexiest Man Alive” cover until incredibly recently?

Looking at the list of People Magazine’s sexiest men alive, it’s almost comical to see Denzel Washington’s face as the only face of color after ten whole years of the magazine starting the feature, and a whole 20 years until the next man of color would find his way on the list. Seeing Dwyane Johnson, Idris Elba, John Legend, and Michael B Jordan all together in five years is perfectly indicative of how America views Black men. Does our history point to us being embraced in our fullness consistently? People Magazine is a perfect example of the answer being absolutely not.

America has a long history of using Black people as props for an agenda that has nothing to do with Black people. This country was not built for us in mind, and that may be most historically obvious in our entertainment industry. The first Black Oscar award winner, Hattie McDaniel, was not granted her Oscar for her talent’s sake, nor for the sake of Black actors that come after her. She won to be a prop to ease white Hollywood’s guilt. Even after her Oscar, Hattie McDaniel struggled to get roles that could showcase the Black experience as something other than a caricature or stereotypes for white stories. Even at the pinnacle of what Hollywood can offer, we find America’s roots are grounded in racism.

I’m not claiming that People Magazine is a racist entity; rather, they reflect an America that is made most apparent the grander the stakes get for our country. That is an America that values capitalism over any other system of operation. In fact, the previous managing editor of People Magazine, Larry Hackett, put it best: “A lot comes down to the photo,” Hackett says in regards to how much money is at stake when choosing a magazine cover. “This person looking at you, literally looking at you, making eye contact. … At that moment of transaction, conception, the buyer, the woman has to say, yeah, that’s it” (ABC).

The simple act of making an unpopular choice for who’s selected for a magazine cover could cost a magazine millions in revenue. When you look at the choice from a business perspective, of course, People Magazine needs to make choices that are thoughtful and indicative of what people want to see and buy. This is why I’m so suspicious of People Magazine’s sudden interest in Black people. They don’t have a history of celebrating diversity before, so what is it now that makes them so adamant?

The Intersection of Racism and Capitalism

Comedian Paul Mooney, known for his no-holds-barred approach to comedy, broke down the fetishization of Black people in one of his comedy specials. Considering hairstyles and skin color, Paul Mooney explained how white America sees our features as “ugly on us, but cute on them.” White America really only knows how to fetishize Black culture; it doesn’t know how to embrace it. That’s why we’re still having debates on who gets to wear cornrows and box braids.

So when Michael B. Jordan appears as 2020’s sexiest man alive, is it a genuine sign of appreciation for him and his work, or is it a ploy to take advantage of our political scape and make a quick buck? Obviously, we can never know a corporation’s genuine intention, but we can certainly dissect the facts.

For reasons most likely to capitalism, the Black Lives Matter movement has been accepted a suspicious amount by large corporations and political figures. This could not be said about most of the Black empowerment movements, including earlier iterations like Marcus Garvey’s Back to Africa Movement, the Black Power Movement, or the Civil Rights Movement. Maybe it’s because America is waking up to how much money Black people can spend when we rally behind something: $1.3 trillion. That’s how much economic buying power Black Americans have. Since Black people are one of the most influential demographics in the US economy, I’m always suspicious of ad campaigns that target our social justice movements. Again, white America does not know how to embrace us; they only know how to use us.

Why has it only been Black men that have been initiated in their new diversity initiative? Where are the other men of color? And as long as we’re talking diversity, why are all the men cisgender and straight? While some may see appreciation in Black people being the only form of diversity, I see a lazy effort in understanding truly what diversity means. While a magazine cover may seem like a harmless symbol, this is far deeper than People Magazine.

It’s Deeper than a Magazine

In 2016, Chris Rock hosted the 88th Academy Awards. In his monologue, he sprinkled in the jokes people expected with commentary on America and the entertainment industry’s treatment of Black Americans. “You’re damn right Hollywood’s racist, but not the racist that you’ve grown accustomed to. Hollywood is sorority racist. It’s like, ‘We like you, Rhonda, but you’re not a Kappa.’ That’s how Hollywood is,” he says. “We want opportunities. We want black actors to get the same opportunities as white actors — that’s it. Not just once.”

In our fight to give Black people more screen time (both literally and metaphorically), it’s essential that white people don’t get embracing us confused with hyper-fixating, fetishizing on us. Our presence is not a marker to measure how racist you are. We are not monoliths or representatives for our entire race. We are not the safest diversity option for your corporation. We are just Black people! While I am honored to see that People Magazine suddenly enjoys including us in the conversation, there is nothing they can do to erase their 27 out of 35-year history of ignoring Black beauty and Black voices, and certainly nothing they can do to erase America’s.