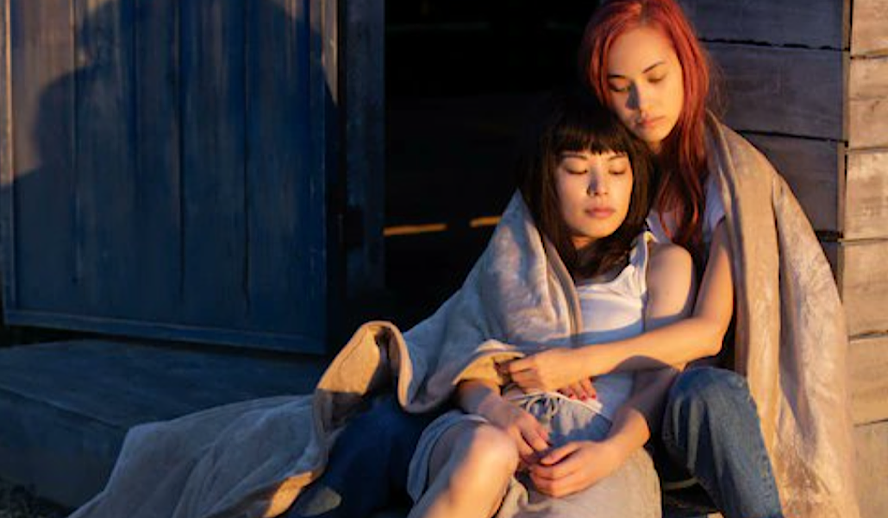 Based on the manga ‘Gunjo’, which originally ran from 2007-2012, ‘Ride or Die’ presents itself as a grimy, subversive story about sapphic fugitives backed up against a wall–bruises and blood splatter tarnish the oft-gazed-at female form. Unfortunately, ‘Ride or Die’ matches neither the sheer badassery of ‘Bound’ nor the social commentary and powerful camaraderie behind ‘Thelma & Louise’–but only because it mistakenly attempts to do so in the first place.

It’s Not Gonna Work Out

Told chronologically with interspersed flashbacks, ‘Ride or Die’ is fundamentally a psychosexual drama that explores the deeply dysfunctional relationship between our protagonists–flashbacks to their days at an elite private school show that Rei has always been obsessed with the seemingly straight Nanae. When the latter reveals that she can no longer afford tuition and plans to drop out, rich kid Rei convinces her to accept a loan on the sole condition that she must have sex with her if she’s unable to repay it–she does repay it, and the two don’t speak for 10 years until the events of the film.

Rei is unstable and obsessive, but the movie vindicates her love with sincerity–the idea that Rei doesn’t truly love Nanae because she doesn’t know her, instead looking down on her for allowing herself to fall victim to men, is touched upon but ultimately rejected. Nanae, on her part, is decidedly bland, at times blaming Rei for uprooting her life but generally tagging along for no discernible reason.

Mizuhara and Sato give creditable performances as Rei and Nanae, but they’re incapable of overcoming the fundamental emptiness of their relationship, lacking true chemistry. DP Tadashi Kuwabara often utilizes tracking shots that allow dialogue scenes to settle in with naturalistic intimacy, but they quickly begin to bore when it becomes evident that our road trip has no worthy destination.

The film’s creeping incongruity and dissonance become clearer when one takes a closer look at the source material.

Compare the intro of ‘Ride or Die’, in which Nanae seems to reach out to Rei in a random act of desperation, to the very first line of ‘Gunjo’–

“All I had to do was say “I love you”… and she killed my piece of shit husband for me. Stupid Lesbian.”

In ‘Gunjo’, Nanae is driven to the breaking point when her husband kicks her in the stomach mid-pregnancy, causing a miscarriage. Knowing Rei’s unhealthy fixation with her, Nanae reaches out and explicitly plans her husband’s murder, smiling with devilish satisfaction when she learns the deed is done.

In ‘Ride or Die’, Nanae is wishy-washy, at times expressing resentment toward Rei but ultimately falling in love. It’s evident that the characters did not survive the trip from manga to film, and ‘Ride or Die’ rings false by constructing its form based on its source material’s musculature without incorporating the necessary tendons–what’s left is a film that starts strong with an intriguing premise but gives way to such lines as, “It must be nice for men. They can put something inside women. My fingers can’t fill you up,” and “You smile when you lie. And you look really cute when you do it.”

There are some genuinely heartfelt moments in ‘Ride or Die’, but it all feels too improperly contextualized to be properly enjoyed. Charming and intimate scenes, such as one in which they joyfully discuss how to kill themselves after getting fast food, succeed in laying down the tracks for a straightforward lesbian road film–but why ‘Gunjo’?

Even then, the film is constantly interrupted by high school flashbacks that truly add nothing, with the exception of one moment–when Rei and Nanae meet for the first time (their younger selves portrayed by Sara Minami and Yui Uemura). Sitting opposite one another in art class, they draw each other’s portraits on assignment. Rei tells Nanae that she prefers to draw smiling subjects and asks her to do so–when she does, Rei falls in love. It’s simple and genuine–with an obsessive love as single-minded as Rei’s, it’s also all we need. I wish, in terms of flashbacks, that it was all we got.

Finally, the amount of nudity and intercourse reminds me of Carey Mulligan and SNL’s recent skit about lesbian period dramas–”Two hours of excruciating tension all building up to a sex scene so graphic you’ll think, “Oh, right, a man directed this.”

Here, the nudity is spread across an indulgent 142-minute runtime that begs to be filled more capably.

‘Ride or Die’ is now available to stream on Netflix–CLICK HERE to watch.