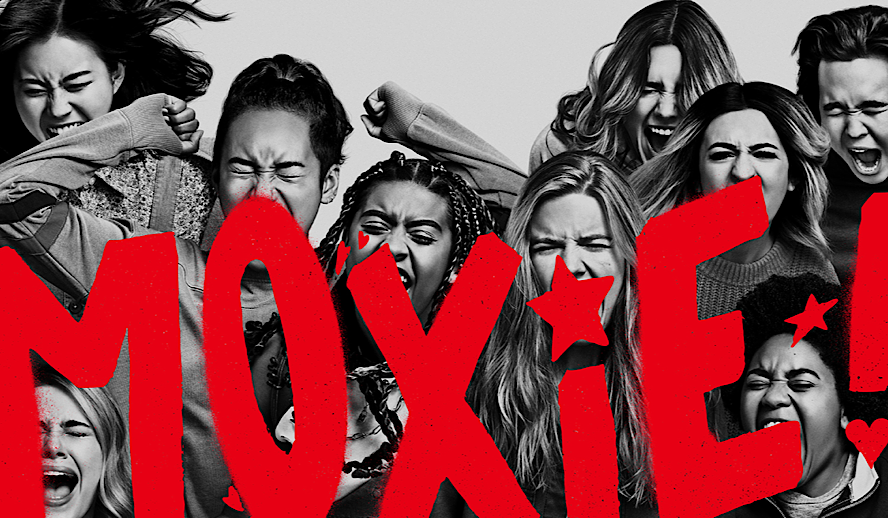 In the new Netflix film ‘Moxie’, directed by Amy Poehler, high school junior Vivian (Hadley Robinson) becomes fed up with her school’s sexist culture and makes an anonymous zine called Moxie about it. The zine ignites a revolution that begins with acts of solidarity among the students and grows to force the apathetic administration to take notice and eventual action in changing the atmosphere of the high school. Based on the novel of the same name by Jennifer Mathieu, ‘Moxie’ depicts Vivian’s “coming-of-rage story” that may inspire other young women to speak up and speak out.

Keep Your Head Up High

Introverted and studious Vivian and her best friend Claudia (Lauren Tsai) just want to make it through the rest of high school and get to college at UC Berkeley. They are at first unperturbed and even excited about the upcoming annual list of superlatives the boys publish, ranking girls as “Most Bangable” or “Best Rack.” Vivian and Claudia are happy to fly under the radar and expect not to make the list. On the second day of school, Vivian witnesses popular jock Mitchell (Patrick Schwarzenegger) harassing outspoken new student Lucy (Alycia Pascual-Peña). In an effort to help Lucy, Vivian says, “If you keep your head down, he’ll move on and bother somebody else.” Lucy explains that Mitchell’s “annoying” behavior likely belies something more insidious and that she isn’t going to put up with Mitchell’s abuse. She tells Vivian, “Thanks for the advice, but I’m gonna keep my head up, high.”

Later, when Vivian is struggling to answer a college application question about something she cares about, her mom Lisa’s (Amy Poehler) teenage desires of “smashing the patriarchy and burning it all down” combined with a news broadcast about the #MeToo Movement compel Vivian to dig up her mom’s old suitcase of feminist paraphernalia. When the superlatives list is published, Vivian realizes it’s horrendously sexist and offensive. Then she discovers she was labeled “Most Obedient.” Inspired to hold her head up high by her new friend Lucy, feminist zines from her mom’s ’90s riot grrrl days, and the song “Rebel Girl” by the punk rock band Bikini Kill, Vivian embarks on a journey to find her political voice and combat the rampant sexism at her high school.

Though ‘Moxie’ starts out with the feel of an ensemble film, bringing together students from different cliques who rally around the messaging of Vivian’s zine, it is undoubtedly Vivian’s story. This has both an advantageous and disadvantageous bearing on the movie. When Vivian asks her mom about her own youthful activism, Lisa tells her daughter, “We made a ton of mistakes,” and “We weren’t intersectional enough.” This seems to foreshadow Vivian somehow overcoming the failings of her mother’s third-wave feminism, which wasn’t “intersectional enough,” but ends up being more of a proclamation about the movie as a whole.

As a teen coming-of-age film, ‘Moxie’ is engaging to watch because of Vivian’s blossoming first relationship with endearing skater boy Seth (Nico Hiraga) and her at times rocky experience of becoming political as she navigates how much she is willing to risk for her convictions. The movie is also focused on Vivian’s friendships, like her growing in a different direction than her lifelong best friend and making new friends who expose her to life experiences different than her own. It’s understandable that Vivian isn’t entirely intersectional in her feminism right out of the gate. She’s still learning and growing. But the film as a whole could have done more.

For the story that it is, it’s good that the focus is through Vivian’s life experiences as a cis white girl dating a boy, because she does have an experience that is filtered through those aspects of her identity, namely her whiteness. Her friend Claudia, who is of Chinese descent, calls this out in the movie in an important scene. As for how ‘Moxie’ serves justice, there is something strange about the fact that all the sins and subsequent punishments of the male student body are hung on Mitchell the entitled jock, and it’s frustrating that it requires his final and heartbreaking offense for him to finally be punished for his actions.

There are intersectional elements in ‘Moxie’, and it’s certainly refreshing to see a more diverse cast than many teen movies. The universal experiences that can be shared by teen girls feel relevant, like how boys’ sports teams receive more attention and acclaim no matter how poorly they play, or how the school dress code disproportionately punishes girls for wearing “distracting” clothing like tank tops, while some boys constantly run around shirtless. The film does mention how various characters are affected by their high school and society in ways specific to their identities, but it doesn’t delve much deeper than simply naming those experiences. And to name the ways the different characters experience life differently is an important step, especially if a viewer might be a young person who hasn’t yet been exposed to language that identifies these distinct issues. At the same time, it would have been especially exciting if ‘Moxie’ had given more narrative weight to these compelling BIPOC, disabled, and trans characters that aren’t as well-fleshed out.

In an interview with Vogue, Robinson said about the film, “The most important thing is that we start a conversation and plant the seeds for girls to empower themselves and their friends, and understand that we’re stronger together.” Poehler added, “I’d also like people to feel a little less alone in this lonely time. We miss our friends, our school hallways and the feeling of coming together. We’re in California and it’s been shut down for quite a while. I’m a pretty nervous rule follower so I haven’t really done anything or gone anywhere.”

‘Moxie’ will likely achieve both those goals. Parents watching the film with pre-teenage and teenage children will probably find the movie helpful in opening up conversations about feminism, intersectionality, and harassment. And the joy, rage, grief, and empowerment shared by the Moxie girls is a heartening portrayal of togetherness that’s especially needed in these isolating times. It’s good to see young women expressing themselves authentically and raising their voices. There is even a great acknowledgement of the fact that not everyone participates in activism in the same way, that not everyone is comfortable or able to be on the frontlines of protests. It’s a shame that the film doesn’t place more focus on the supporting characters and their stories, and it leaves a lot of ground uncovered where intersectionality is concerned. But as a coming-of-age story about Vivian’s beginnings as an activist and as a universal rallying cry for girls’ empowerment, ‘Moxie’ is a great place to start.