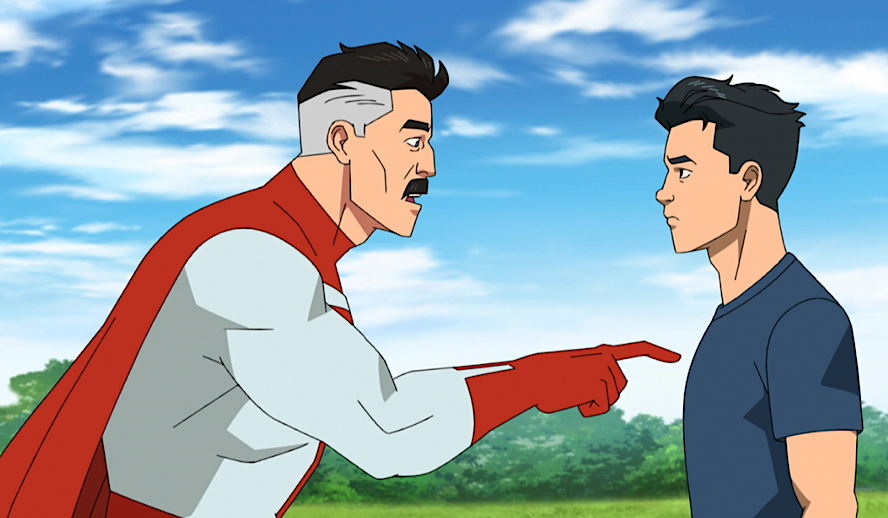 Inseparable creative partners Seth Rogen and Evan Goldberg, originally known for co-writing (and later co-directing) comedy films like ‘Superbad’, ‘Pineapple Express’, and ‘This Is the End’, have been active in recent years as executive producers for adult-oriented graphic novel adaptations.

First, they produced and developed AMC’s ‘Preacher’, based on the comic created by Garth Ennis and Steve Dillon–then, they produced Prime Video’s ‘The Boys’, developed by Eric Kripke and based on the comic again written by Garth Ennis and co-created by Darick Robertson. Their latest is Prime Video’s ‘Invincible’, an adult animation series based on the Image superhero created by artist Cory Walker and writer Robert Kirkman, the latter of whom also co-created ‘The Walking Dead’.

In most other circumstances, to call it a knock-off would be a criticism–here, it’s merely part of a rich tradition of alternate company equivalents in comic books. For instance, ‘The Boys’ has “The Seven,” a corrupt analog of the Justice League featuring twisted versions of Superman (Homelander), Wonder Woman (Queen Maeve), Batman (Black Noir), the Flash (A-Train), and Aquaman (The Deep)–it’s no different here. Of course, Invincible is a knock-off Superboy, son of the knock-off Superman himself, Omni-Man (voiced by the inimitable J.K. Simmons)–but is he more like Captain America or Homelander?

A Quick Recap of Episode One

Episode one begins with a disarmingly intimate Jon Hamm cameo as Steve, a White House guard who monologues about having grown closer to his troubled stepson–he’s abruptly interrupted by the supervillainous Mauller Twins (voiced by the prolific Kevin Michael Richardson), intent on killing the President. Before any lives are lost, however, Omni-Man and the Guardians of the Globe arrive and save the day.

We’re then introduced to our protagonist, Yeun’s 17-year-old Invincible (otherwise known as Mark Grayson). Reading a comic book on the toilet, he’s barged in on by his mother, Debbie Grayson (Sandra Oh). We learn that, despite his superhero heritage, his powers haven’t manifested yet–but that quickly changes.

Animated in the bright, primary color-filled style of cartoons like ‘Justice League’, ‘Invincible’ might initially strike you as a mild parody that largely plays it straight–Mark not only suffers from some of the same familiar origin story growing pains as Peter Parker / Spider-Man (like being beaten up by a bully at school before his powers manifest), but also doubts his ability to live up to his father’s legacy.

Definitely Not a Kids’ Show

In this regard, the show succeeds–the combination of quality writing, animation, and phenomenal voice acting allow its more intimate scenes to be surprisingly affecting. Still, as the first episode drew to a close, I was slightly underwhelmed–that is, until an unexpected massacre establishes the greater plot and underlying tone of the series.

While the opening attack on the White House was, beat for beat, a classic superhero fight scene in which little blood is drawn and innocent civilians are saved by the skin of their teeth, the first episode’s conclusion is as gruesome as anything from ‘The Boys’. Grayson’s growing pains stop being whimsical as actual superheroism proves to be more difficult, violent, and traumatizing than initially expected–the animation doesn’t shy away from the gruesome realities of collateral human damage.

That said, ‘Invincible’ lacks ‘The Boys’’ abject cynicism–at its core is an earnest, optimistic story about a young hero struggling to come to terms with the price of heroism. Whereas The Seven are more like celebrities who combat manufactured crime, the heroes in ‘Invincible’ are genuinely dedicated to combating a never-ending cavalcade of superpowered adversaries–in this way, ‘Invincible’ works as both clever parody and good ole’ superhero action, thanks also in part to the punchy, fast-paced animation.

It’s also surprisingly funny and charming, largely thanks to the stellar voice cast. Of course, star Steven Yeun just earned the Oscar nomination for Best Actor with ‘Minari’, historically being the first actor of Asian heritage to do so (alongside Riz Ahmed with ‘Sound of Metal’). To the role of Omni-Man, J.K. Simmons lends his trademark blend of congeniality and menace (See: ‘Whiplash’, ‘Oz’) that’s perfect for the character’s alternating roles of father figure, beacon of hope, and all-powerful terror.

Each of these roles is cast to perfection, and star power never supersedes the role itself–the universe of ‘Invincible’ feels truly alive, with a rich pantheon of heroes and villains alike that offer fresh takes on familiar characters.

Related article: The Power of Nonverbal Language: The Triplets of Belleville and Other Wordless Animations

One minor gripe I have with the show is Invincible’s suit–I’m not too fond of the color scheme, and the goggles are a little geeky (which fits the character). That’s obviously just a personal opinion–’Invincible’ is a great superhero show. Funny, violent, and dramatically effective, ‘Invincible’ is a welcome new addition to Prime Video’s growing library of alt-superhero content.

With the first three episodes available to watch now on Prime Video, new episodes will air every Friday, concluding with the eighth episode on April 30–CLICK HERE TO WATCH.