The Evolution of Zendaya: From Disney Actress to Emmy Award Winner and Leading Lady 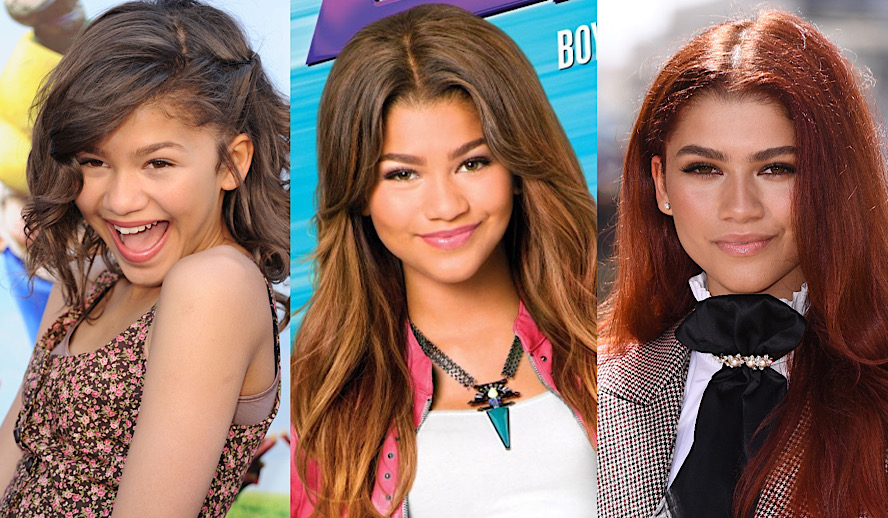 The evolution of Zendaya from the time she got her start as a background dancer in a music video. Now, a little over ten years later, she is the youngest actress to ever win the Emmy for Outstanding Lead Actress in a Drama Series for her performance in HBO’s critically-acclaimed Euphoria, and she’s only continuing to climb.

Born in Oakland, California, Zendaya got her start as a child model but her interests quickly led her to dancing, and she joined a hip-hop troupe at age eight. The first gig of her professional career resulted from this, as she was selected as a backup dancer for a Sears commercial that featured then-Disney star, Selena Gomez.

Zendaya was 14 when she was cast in one of the lead roles in the Disney Channel sitcom Shake It Up, where she co-starred alongside Bella Thorne for three seasons, from 2010-2013. Following her Shake It Up run, which was the launch point for her becoming a household name, Zendaya released a debut self-titled album one year later. The album, which featured the hit single “Replay,” peaked at #51 on the Billboard 200. That same year, she also competed on season 16 of ABC’s Dancing With the Stars, where she and her partner took second place, and also published a book titled, “Between U and Me: How to Rock Your Tween Years with Style and Confidence,” that she wrote to “help girls through the tougher parts of the tween years and help them appreciate the fun parts.”

Zendaya’s establishment as a Disney star led to an adoring fanbase, and in 2015, she produced and starred as the lead in the Disney Channel series K.C. Undercover, initially titled “Super Awesome Katy”. The series followed Zendaya as a teenager named K.C. Cooper, who amidst her life as a high school teenager is secretly a spy, but the role came with several conditions from the star herself.

“The only way I was going to come back to the Disney Channel was if I was in a position of more power,” she told Cosmopolitan in 2016. Her demands included that she would be a producer, as well as a name change for the show, and that it would feature a family of color.

“One thing that is really important to me is diversity on the channel. It’s hard as a young person of a different ethnicity or background to look at the TV and not see anyone who looks like you. Representation is very important.”

Zendaya was also adamant that her character would not be portrayed in the typical way that Disney Channel often cast its girls.

“I wanted to make sure that she wasn’t good at singing or acting or dancing,” she recalled in a Vogue interview in 2017. “That she wasn’t artistically inclined. I didn’t want them to all of a sudden be like, ‘Oh, yeah, and then she sings this episode!’ No. She can’t dance; she can’t sing. She can’t do that stuff. There are other things that a girl can be.”

The character resonated with fans who were now seeing a representation of themselves and their families onscreen and Zendaya has only continued to break similar barriers in the roles that she has taken since.

Even before her Disney show officially wrapped, Zendaya made her big-screen debut as M.J. in Spider-Man: Homecoming. Monumental in that her first feature film was a much-anticipated blockbuster Marvel movie, but also in that her character had only ever been portrayed by a white woman, Zendaya’s performance as a quirky and offbeat version of M.J. garnered praise despite her limited screen time. While the casting was criticized in the similar nature of The CW’s casting of Candice Patton as Iris West in The Flash, it was a definitive step forward in terms of representation in regards to iconic film roles and was a role that Zendaya absolutely nailed.

Evolution of Zendaya From Disney to Euphoria

While she went on to star along with Hugh Jackman and Zac Efron in The Greatest Showman (2017), as well as the sequel to her movie debut, Spider-Man: Far From Home (2019), perhaps Zendaya’s biggest achievement thus far has been her raw and powerful portrayal of a teenage girl struggling with addiction on HBO’s Euphoria. Fans and fellow actors alike went crazy on social media when she won the Emmy for Outstanding Lead Actress in a Drama Series during this past September’s 72nd Primetime Emmy Awards, competing in a spot against big names including Jennifer Aniston, Olivia Colman, and Sandra Oh. At age 24, she became the youngest woman ever to win the category – an incredible achievement for any actress, but especially a biracial woman, where roles and opportunities are more difficult to come by. Zendaya credits the show’s creator, Sam Levinson, for the opportunity to embody the character that has only continued to launch her into stardom.

“Our creator wrote Rue based on his own experiences with addiction and he is a white man, so Rue could have been that,” she said during The Hollywood Reporter’s virtual Drama Actress Roundtable for 2020. “Rue had no description. So, I’m very grateful and hopefully… I can create things and make space for women who look like me and women who don’t look like me. That’s the ultimate goal, to make room, [because] for a lot of Black creatives, it’s not a lack of talent but a lack of opportunity.”

Outside of television and film, Zendaya has had remarkable success within the fashion world, releasing her own clothing line, Daya by Zendaya, back in 2016, in which she made a point to make her collection both gender-fluid and affordable in order to maximize accessibility.

As of this month, she became the new face of Valentino, with the designer describing her as a perfect ambassador for the brand as a young woman who “uses her talent and her work to express herself, her values and her generation as well.” Throughout the last few years, Zendaya also snagged ambassador roles with Lancôme and Bulgari, and also designed a collection with Tommy Hilfiger in 2019.

In addition to making waves in these multiple arenas, the actress has additionally been known to use her platform to speak her mind and to promote change. Zendaya has used her social media to discuss representation and diversity in Hollywood and to educate her followers about systemic racism and police brutality, allowing Patrisse Cullors, a co-founder of the Black Lives Matter movement, to take over her Instagram earlier in the year. She also implored her followers to vote in the 2020 election.

“I have a heavy responsibility on my shoulders, but I’m appreciative of that because with that there’s a lot of good that I can do and I know who is watching,” she said during the Hollywood Reporter roundtable. “Now, more than ever, specifically with Black Lives Matter and everything, I feel an obligation to make sure that I’m aware and putting out the right things and in line with organizers and people who are on the ground.”

Related article: Spider-Man’s Zendaya In Her First Adult Role In HBO’s Brilliant Series Euphoria – It Is Also One Of Leonardo DiCaprio’s Favorite Shows

Zendaya has continued her activism among several other upcoming projects, including the science fiction film Dune, Malcolm & Marie, directed by her Euphoria collaborator Sam Levinson, A White Lie, which she will also co-produce, and biopic Be My Baby. She also has dreams outside of acting and contributing more work behind the scenes.

“I love being able to create what I want to see made,” she told Essence during her cover shoot. “I’m also really interested in cinematography. Maybe I’ll become a director or a director of photography. I am just really taking in all that knowledge and learning as much as I can. I really love the art of actually making film.”

Two albums, three television shows, and three (released) blockbuster movies later, Zendaya has an impressive resume for someone her age and remains an utterly iconic figure.  She is a powerful and fierce young woman who is not afraid to go after what she wants and is an inspiration to everyone around her. Her effortlessly cool yet still unwaveringly humble demeanor makes for the perfect star and one that we will undoubtedly be seeing more of, as she has years ahead of her to continue her tour de force in Hollywood. But for now, we can continue to celebrate her recent groundbreaking achievements and remain excited for her upcoming ones.

We, at Hollywood Insider, will continue to champion you Zendaya!