A Tribute to Viola Davis: The Powerhouse Champion of Excellence 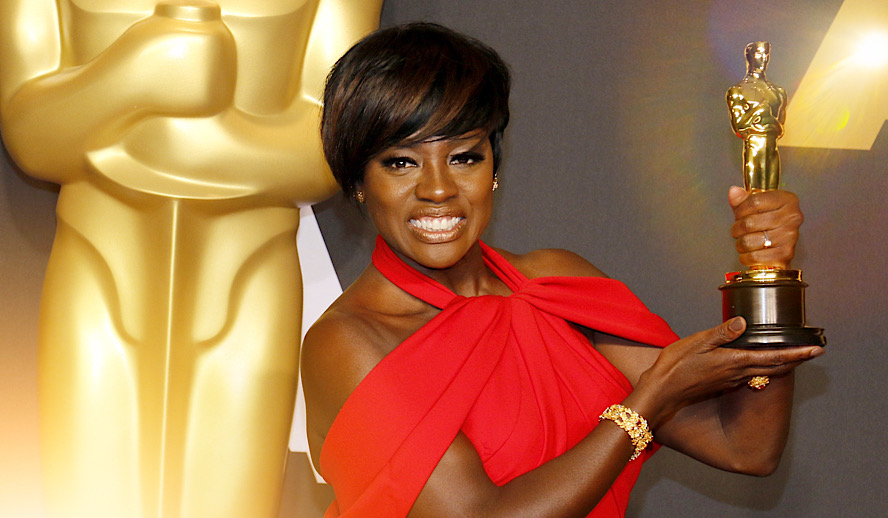 Photo/Video: Viola Davis at the 89th Annual Academy Awards with her Oscar for Best Supporting Actress for ‘Fences’/Tinseltown

Viola Davis is one of our generation’s finest actresses. In terms of range and versatility, Viola simply cannot be beaten. She is also one of the most decorated Black female actors of all time, with an Academy Award, Primetime Emmy Award, and dual Tony Awards. She’s a rarity in that she’s Black and recognized for her talent. This industry is criminal towards Black people and Black women especially. Although on the surface it might seem she’s appreciated for her work, for an actress of her talents, awards, training, and career, she’s admitted that she still has to hustle — far harder than she ever should–for a seat at the Hollywood table.

“I am nowhere near them,” she says in reference to her A-list White counterparts, “not in terms of money, not in terms of job opportunities, nowhere close to it,” she admitted in an interview with Women in The World. Viola Davis has one of the most illustrious careers in the game and even SHE gets short-handed when it comes down to it. Imagine what other Black female actresses have to go through if even the best of the best has to struggle for acknowledgment. Luckily, the number one spot goes to a woman of immense kindness; Viola has been working overtime to tell untold stories and pave the way for the next generation.

Viola Davis – A Symbol Of Hope

Viola Davis came from humble beginnings, born in St. Mathews South Carolina on her grandmother’s farm on the Singleton Plantation. She would later move across the country to Rhode Island where her family stayed in “apartments that were condemned and rat-infested” according to Harper’s Bazaar. Maybe that’s why Viola stays humble. In the same interview, after winning her first academy award for the film adaptation of August Wilson’s ‘Fences’, Viola says: “I’m good with it,” she said. “I’ll have some mac and cheese and I’ll go back to washing my daughter’s hair tomorrow night”. Could you even imagine Viola flexing her wealth or accomplishments? She’s far too graceful to even have the thought cross her mind it would be ridiculous to see.

This is the same for many of our most celebrated Black actors and actresses. Viola carries a lot of weight on her shoulders. With that win, she became the first Black actor or actress to win an Emmy, Oscar, and a Tony for acting–no other Black actor has done it before her. If not for her grace, there’s no way she as a Black woman would get even close to where she is even with her talent considered. The gates of entry into Hollywood have far more restrictions on Black performers; Viola Davis has to be poised, graceful, and eloquent at all times. Otherwise, she’ll be quickly dismissed. This is the difference between Black actors and White actors, a White actor can simply exist, controversy and all, but highly successful Black actors must become symbols, archetypes for their entire communities. While her awards and accolades are impressive, that’s not what makes her one of the greats.

On Davis’ 55th birthday, the actress shared an Instagram picture of her plantation house, with a caption saying how she’s deciding to own her story moving forward. She included a Cherokee Birth Blessing in the caption as well: “May you live long enough to know why you were born.” That indeed is the destiny of Black people to discover where we’re from every day. Most of us do not have a strong ancestral connection that grounds us.

This fact is intensified when Black people are situated in the public eye. In a USA Today interview, Viola tells us that she feels as if her “entire life has been a protest. My production company is my protest. Me not wearing a wig at the Oscars in 2012 was my protest,” she said. “It is a part of my voice, just like introducing myself to you and saying, ‘Hello, my name is Viola Davis.’”

Viola’s entire platform on Twitter and Instagram is dedicated to uplifting Black voices. Her Twitter is dedicated to wishing her friends like Taraji P Henson happy birthday, and uplifting Naomi Osaka for her US Open Victory. Although Viola goes out of her way to use her voice to uplift Black voices, it’s not always perfect.

One of Davis’ most recognizable roles is Aibileen from the Oscar Award-winning picture ‘The Help’. While it earned her an Oscar nomination, making her one of few Black women to be nominated for the prize,  the film is now facing criticism as we begin to ask for more from our art and representation.

It turns out ‘The Help’ isn’t actually a useful resource for learning about racism. Movies that use Black people and to some extent, stories, to illustrate the White narrative and experience, end up having little to do with lessons about racism except…don’t be racist. What we ask for now is depth in our Black stories and ‘The Help’ rounds out to be too shallow for 2020. But we have to understand that Black actors can only operate under their circumstances. How many roles are truly offered to Black performers, how many opportunities for direction or writing? Sometimes performers have to make do with what they were given. And even more importantly, Viola’s contribution to Black film and theatre is far greater than any singular project she’s been a part of.

Empowering the Next Generation

With her two Tonys, one for playing Rose in ‘Fences’, and the other for Tonya in ‘King Hedley II’, two Oscar Nominations, (the second for ‘Doubt’ in 2008), the actress has decided to take a turn to focus on a bigger project, the creation of her own production studio. Here’s an excerpt of their mission statement found on their website: “With an emphasis on producing narratives from a diverse range of emerging and established voices alike, JuVee Productions aims to become the go-to creative hub where the next generation of filmmakers and artists have space to craft dynamic stories spanning the broad spectrum of humanity”.

In every facet of her existence, Viola seeks to empower unheard voices in the Black community. Truly a gem, she’ll sparkle for many generations to come, and even farther in the next generation of actors, the one she’s been essential in uplifting.

We, at Hollywood Insider, will continue to marvel at the great Viola Davis, and we will keep cheering you on Viola, keep breaking all barriers and winning all the awards for being one of the greatest powerhouse artists and a spectacular human being – instead of asking for a seat – own and lead the Hollywood table.