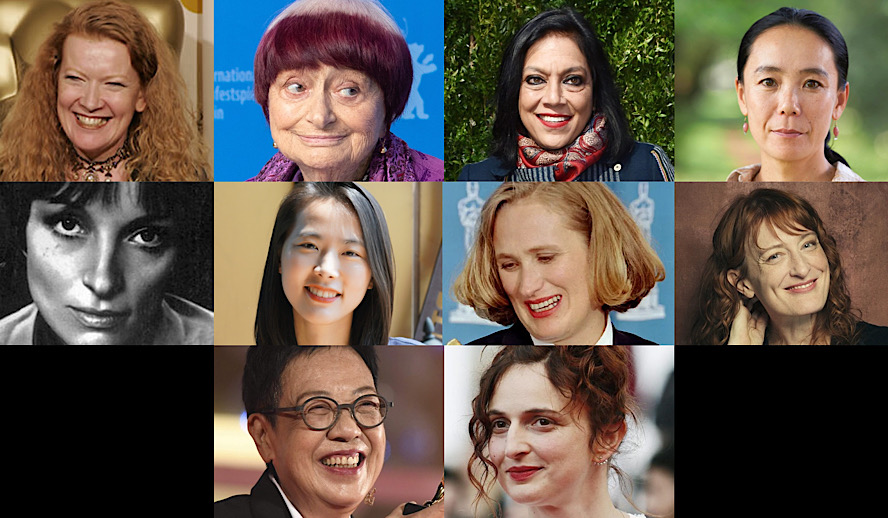 Photo: The Who’s Who of the Prestigious International Female Directors List

In honor of, and beyond, Women’s History Month.

The world of film is, unfortunately, still something of a man’s game. This is a problem that is finally being given attention and even solutions to, but part of the issue is that women not only receive less opportunity but less recognition for their work. This is a loss to all, considering the amazing work being put out by women from all over the world.

The men have had their turn – now, let’s take a look at ten amazing international female directors.

Agnès Varda was the most famous female director to come out La nouvelle vague, otherwise known as the French New Wave. Varda wrote and directed several features over her career, including the now iconic ‘Cleo from 5 to 7’ and ‘Vagabond’. Later, she would turn her focus to documentaries, including the Oscar-nominated ‘Faces Places’, in which she features alongside French photographer and street artist JR. Varda continued making films up until her death in 2019. Her final work, ‘Varda by Agnès’, premiered the same year.

When one thinks of famous New Zealand directors, perhaps Peter Jackson or Taika Waititi come to mind. However, long before ‘The Lord of the Rings’ or ‘Jojo Rabbit’ were up for Oscars, Jane Campion’s ‘The Piano’ walked home with three in 1993 after being nominated for eight. The film’s nominations included Best Picture and Best Director, with Campion only being the second woman nominated after Lina Wertmueller for ‘Seven Beauties’ in 1975. The next would be Sofia Coppola for ‘Lost in Translation’ in 2003. Campion is also known for her critical successes ‘An Angel at My Table’, ‘The Portrait of a Lady’ and ‘Top of the Lake.’

Andrea Arnold was originally an actor, playing the character of Dawn Lodge in the children’s show ‘No 73’, later known as ‘7T3’. Arnold then transitioned to writing and directing short films, including the Oscar-winning ‘Wasp’ in 2003. She would then go on to write and direct her first feature, a thriller by the name of ‘Red Road’. She would later tackle an adaptation of ‘Wuthering Heights’ in 2011 before releasing what is arguably her most famous film to date: ‘American Honey’. This BAFTA-nominated feature starred Sasha Lane, Shia LaBeouf, and Riley Keough, with many of the extras in the film being non-actors that Arnold ‘street cast’.

“If it’s in a word, or it’s in a look, you can’t get rid of the Babadook.” This unusual Australian horror movie about postpartum depression took the world by storm when it premiered in 2014. The film currently holds a strong 98% on Rotten Tomatoes, and even holds an unlikely (and unintentional) place in the heart of the LGBTQIA+ community after a genre classification mishap prompted studies of the film’s queer subtext. Kent followed this international hit with the controversial ‘The Nightingale’. This colonial revenge movie premiered at the 75th Venice International Film Festival before its theatrical release in 2019.

After the success of Bong Joon-Ho’s ‘Parasite’ in 2019, it seems the world has discovered a taste for Korean Cinema – and they should turn to Bora Kim’s ‘House of Hummingbird’ as their next dish. Kim is new to the Cinema world, with ‘House of Hummingbird’ being her first feature, but she is already making a name for herself. Her short film ‘The Recorder Exam’ won multiple awards and helped to secure finance and support from the Korean Film Council and Seoul Film Commission. ‘House of Hummingbird’ has since taken home awards from the Tribeca Film Festival, the Busan International Film Festival, and the Blue Dragon Awards.

Born in India and educated at both Delhi University and Harvard, Mira Nair began her career as an actress before placing herself behind the camera instead. She began in the world of documentary, exploring Indian cultural tradition, including the award-winning ‘So Far From India’. In 1988, Nair released her debut fiction feature ‘Salaam Bombay!’. This tale of a boy abandoned at a circus was nominated for the Best Foreign Language Film at the 1989 Academy Awards and Golden Globes, and won both the Audience Award and Golden Camera at the Cannes Film Festival. After this strong start, Nair has gone to direct several more features, including the critically acclaimed ‘Monsoon Wedding’ in 2001 and ‘The Namesake’ in 2006.

Naomi Kawase is perhaps the most famous female Japanese director outside of Japan, mostly because her films are known to do well on the international film circuit. She is a three-time winner at Cannes Film Festival, first being awarded the Golden Camera in 1997 for ‘Susaku’, the Grand Prize of the Jury in 2007 for ‘The Mourning Forest’, and the Prize of the Ecumenical Jury for ‘Radiance’ in 2017. She also served on the jury in 2013. With a total of thirty-two directing credits to her name, Kawase has excelled in both feature, documentary, and shorts, while also being credited as a writer, producer, cinematographer, and editor.

Larisa Shepitko moved to Moscow to join the All-Union State Institue of Cinematography when she was only sixteen years old, training under Soviet filmmaker Alexander Dovzhenko. She studied under him for eighteen months until his death in 1956, and four years later would make her first credited short ‘Slepoy kukhar.’ She would make two shorts before her prize-winning diploma film, ‘Heat’, marked her graduation from the Gerasimov Institute of Cinematography in 1963. She would go on to make four features, with her final work ‘The Ascent’ cleaning up at the 1977 Berlin Film Festival, before she died in a car crash while location scouting for ‘Farewell’ in 1979. Her husband, Elem Klimov, completed the film and made a tribute film to her entitled ‘Larisa’ in 1980.

Born in Fiesole, Tuscany in 1982, Alice Rohrwacher is an up-and-comer in both the Italian and international film industries. Rohrwacher released her fiction feature, ‘Corpo Celeste’, in 2011. The film was nominated for both the Golden Camera and the C.I.C.A.E. Award at the 2011 Cannes Film Festival. Her next film, ‘The Wonders’, would transform her from a Cannes nominee to a winner, taking home the Grand Prize of the Jury with a bonus nomination for the prestigious Palme d’Or in 2014. Her third feature ‘Happy as Lazarro’ would make three for three as a Cannes favorite in 2018, and she served on the festival’s jury in 2019.

Related article: The Rise & Victory of Mira Nair: The Pride of Indian Representation in Cinema

Ann Hui has been a significant player in the Hong Kong film game for four decades, with nearly thirty features under her belt. This expanse of content covers a wide range of genres, including thrillers, martial arts, and films focussed on female issues. Many of her films focus on the contemporary life of women in Hong Kong. Hui was the first female director to be granted Venice Film Festival’s Lifetime Achievement Award and has won numerous awards over her career, including six at this same festival.