Spike Lee’s ‘Blackkklansman’: A Wild Ride Into the History of Race-Relations in the United States 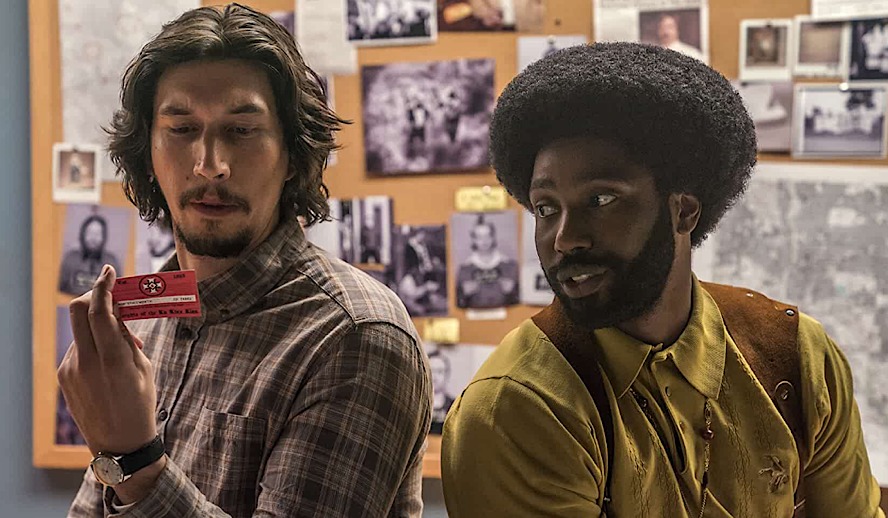 Could you ever envision a movie about the KKK that is genuinely humorous while not discounting the depth of its ugly history? Only Spike Lee could make such a movie with this perfect delicate balance, and it finally earned him his first Oscar for Best Adapted Screenplay, after five prior nominations.

BlacKkKlansman is adapted from Ron Stallworth’s memoir of a similar name. It features John David Washington, of ‘Tenet’ fame, as Ron Stallworth, a Colorado police officer infiltrating the KKK as part of an undercover police investigation. He establishes his membership with the KKK on the phone while his Jewish white-passing colleague Flip Zimmerman (Adam Driver) represents him in physical meetings. This ended up being John David Washington’s breakout role, who is the son of superstar Denzel Washington.

The opening sequence includes a guest appearance with Alec Baldwin as Dr. Kennebrew Beauregard, a member of the KKK, filming a propaganda video. It sets the tone of the movie as it is an especially jarring piece of racist vitriol, even though the audience could probably already guess what he was about to say. The little cuts in his acting are intended to show the audience how “scripted” the hate is, and impress upon them how deeply propagandistic it is.

The movie, while classified as a drama, feels more of a satire/comedy. The script and acting have humorous undertones, making it a uniquely engaging drama. You can see hints of Spike Lee’s striking personality and trademark signs in a number of directions and stylistic choices. It is evident in the uniquely stylized name of the movie and the message “dis joint is based upon some fo’ real, fo’ real sh*t” which flashes on the screen as the movie starts. There are interesting moments of tension interspersed with comedy that keeps the audience alert and on the edge of their seats, such as multiple moments when a certain KKK member is suspicious of Flip and is inches away from figuring out the infiltration.

The script is intelligently written and deals with many different interpretations of racial identity. While Ron Stallworth and his girlfriend Patrice (Laura Harrier) are in tune with their roots, Flip Zimmerman is on the different end of the spectrum. In a particularly striking scene, Flip talks about how he never subscribed to his Jewish identity because he was not raised that way. While working as an undercover KKK member, he was required to consistently participate in dehumanizing his race. Even though he did not particularly feel for his second identity, his actions made him uncomfortable. This is how Spike Lee says that humans always subscribe to identity by nature even if they do not adhere to it completely, and they do have a certain level of loyalty and feeling towards it. At the end of the day, race plays a significant role in forming a sense of community, no matter how much a person is in tune with their own.

The movie sheds light on different kinds/levels of activism. Ron Stallworth wants to change the system from within by joining the police force to help increase Black American representation within the organization. He still has faith in the system and believes that if they work from within, he can help steer America to a better standard of racial relations and increase protection for minority groups. On the flip side, we have Patrice who is the president of the Black Student Union and an active supporter of a full-scale “civil war”-like revolution to stand up for her Black brothers and sisters. They have frequent arguments on this issue; she believes that Ron is too soft and blinded by the system, while Ron believes that she is too radical. The interesting aspect is that the movie never takes a position on validating or invalidating either form of activism. The movie shows the audience that both of them at the core are actively working to support their community in the way they think is best, and they are both valid in their beliefs.

Symbolism Related to Trump and the Current Administration

There are subtle hints that materialize into a blaring signal as to what the movie is referring to the present-day political situation in the United States. There is a scene where a fellow cop talks to Stallworth about how KKK’s Grand Wizard and leader David Duke is going to be rebranding the KKK by packaging their racist agenda into more palatable political issues such as affirmative action and immigration. This way he could ensure more everyday Americans can digest their values, and end up one day electing someone as the President who embodies these values. This is clearly alluding to the current white nationalist support for Donald Trump. There are various hints like this throughout the movie, culminating in the explosive final scene. The movie was also strategically released a day after the first anniversary of the infamous Charlottesville “Unite the Right” Rally, on August 10, 2018.

The dialogues of the KKK members are obnoxiously racist, to the point that you wonder if the purpose of intelligent racial commentary is getting sidetracked by the absurdity of it. However, after watching the whole movie, the true meaning behind this writing decision becomes evident. While watching the movie, the shockingly graphic racism displayed by the KKK is enough to make anyone uncomfortable, but the audience leans on the fact that this is reminiscent of a different time. In the ending footage, the movie shatters this notion and shows us that such people, sadly, still exist. President Trump’s MAGA campaign slogan and the “America First” phrase from his inaugural speech are chillingly similar to the America First ideology of David Duke as shown in the movie. The upside-down American flag which turns black to the sound of chilling silence is disquieting.

BlacKkKlansman is a mirror into how racism is embedded into the fabric of this country, and not much has changed. It ties the 1980s with the current situation to show us how it is an inherent element of its history. It leaves the audience with a feeling of uneasiness, and pushes them to reflect on what the country is dealing with right now and prompt them to pay attention to all the political undertones of it. Oh, and Black Lives Matter.