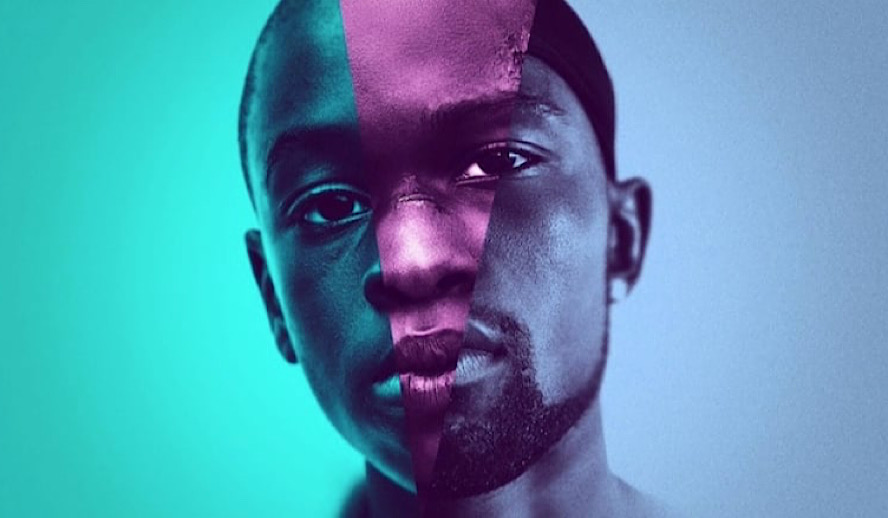 “38.7 Percent of African-American Minors Live with Both Parents” the 2016 US Census Bureau cites. The filmed western experience has standardized the white nuclear middle-class family dynamic as the blueprint for all American households. But Black people often face different socio-economic environments, with 45.8% of young Black children living below the poverty line, as contrasted to 14.5% of caucasian children, according to State of Working America. This harsh reality juxtaposes with alluring Southern Florida scenery to create the backdrop of Moonlight.

The Beauty of Black People telling Our Stories – Moonlight

Moonlight is director Barry Jenkins’ sophomore feature film. Growing up in south Florida himself, the life of Chiron is quite similar to his. This is why Moonlight can maneuver through difficult topics with grace, following a thread of profound truthfulness in every shot. The camera work in this film is immaculate. Barry Jenkins’ signature close-up shot, where he drops the frame rate and has his actors look directly into the camera, is the perfect tool to zoom into characters’ visceral moments of transparency. The camera coddles characters with a softness that’s often contrary to their visual appearance, like Juan, played by the masterful Mahershala Ali, is first introduced as a drug dealer, but the continuous and circular camerawork creates a soothing atmosphere as we see the first instance of family in the movie in the drug network.

Moonlight challenges the glorified immediate, nuclear family dynamic that over-saturates American media. Moonlight never mentions Chiron’s father, but it doesn’t have to. Chiron soon fills that void in community members; the film shows us that family is anywhere love is. Poverty, gang, and drug culture are not mutually exclusive to kindness, love, and protection. American media villanizes Black social protective measures like gangs to justify the prison industrial complex and the destruction of Black families. It’s deeper than just taking the father out of the home, but systemic efforts can disseminate entire communities by viciously targeting influential figures. Moonlight doesn’t hold it’s tongue when illuminating systemic structures such as the crack epidemic, the school to prison pipeline, and many more.

When community figurehead Juan is not on screen, the characters are left with a vacuum reflective of his weighty presence when he is. Mahershala crafts a character that balances difficult decisions with fortitude and tremendous love. Visually one might see Juan as the stereotypical “thug”; he drives a Cadillac, has adapted a pimp walk, sports a du-rag, and wears his pants below his waistline. But Black people watching the film understand Juan on a much deeper level.

In him, we see our own mentors, teachers, community members, “cousins”, “uncles”, “sisters”, and “brothers” who have given us just as much family as blood relatives. Research shows that Black Americans have held tight to our more African “consanguine patterns” to stay resilient in times of hardship. Moonlight proves that genetic kinship is irrelevant to what family actually means.

Care in close moments, shared intimacy, whether it be over food or in open space, that’s what family is. It’s essential to note that Black people are not a monolith. Not every Black family is poor. Not every Black family is a broken one, and not everyone Black initially related to Moonlight. The film, at its core, is about the taboo of queerness and finding love in who you are.

Janelle Monae’s character Teresa is a guide through this movie’s discovery of the intersection of homosexuality and Blackness. She plays a strong maternal figure in the movie. Monae crafted her character to embody the grace and resilience reflective of the generations of Black women that have supported their family and community, and she did it excellently. Motherhood and it’s intricacies is wonderfully tackled in Moonlight. Naomie Harris plays Chiron’s mother, a single mother grappling between vices of escapism and providing for her son. Single motherhood is something inner-city families all across the country experience; Moonlight gives us the complex depictions of our realities we’re craving.

Moonlight takes grander concepts like poverty and shrinks them down to delicately strung moments. The characters feel like real people, so much so that you get the urge to go find them; after watching, it feels like they’re still out there somewhere, waiting for you to find them again. For some Black people, these gorgeous characters are merely reflections of things we already know, and family members we cherish. Watch Moonlight on Netflix and bask in the illumination of Black love.