‘Slalom’ Review: A Deeply Unsettling Look Into Sexual Assault in The Sports World 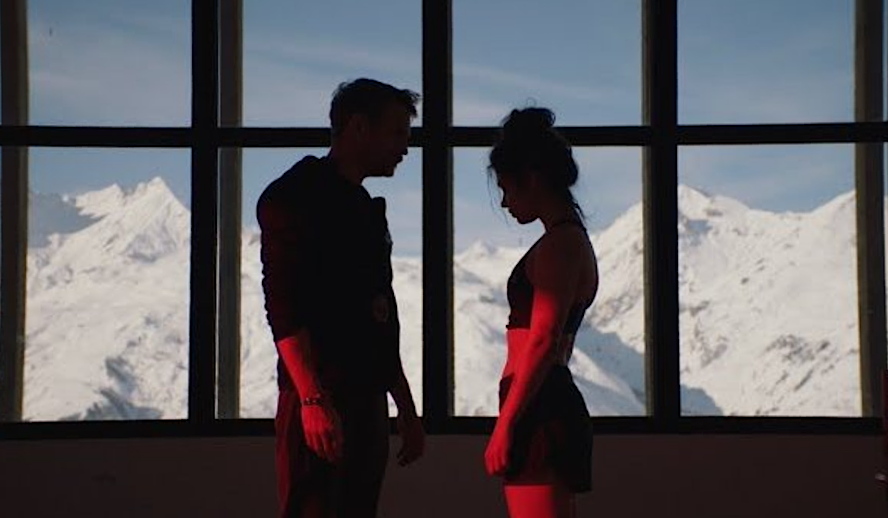 Just like its source material, the film ‘Slalom’ has been slowly garnering attention in a way that no one can ignore anymore. With the pressures of stardom and becoming a professional skier on the line, ‘Slalom’ follows a young girl and her relationship with her much older coach as she begins to gain national attention. As the film progresses, the relationship between Lyz Lopez (played by Noée Abita) and her coach Fred (Jérémie Renier) grows into something much more sinister and dangerous.

While the tension between Renier and Abita is clear, and it’s easy to guess what happens next, the events in the film are still gut-wrenching and hard to watch. Renier plays Fred better than any other actor could, with such a self-assuredness that it makes us almost ignore his pernicious nature. He appears so confident and so knowledgeable that we as an audience instinctually want to trust him, just like Lyz does.

Although visually beautiful and pristine, ‘Slalom’ is an extremely unsettling movie. Perhaps it’s the way writer-director Charlène Favier set up everything even before the camera started rolling that made the film more haunting. For instance, the main character is 15, the new age of consent that is in the process of being cemented as law. Though we’ve heard this story many times over, most recently in 2016  with the USA Gymnastics Sex Abuse Scandal, Favier carefully crafts a film that unearths the true horrors of what these young athletes often experience.

‘Slalom’ – A Masterclass in Cinematography

‘Slalom’ is exquisitely shot, so much so that it often took my breath away. Set in the snowy French Alps, Favier makes use of the entire landscape whenever possible. No matter how much Fred inflates the ego of Lyz, the truth is clear always. This incident isn’t isolated, it’s one of many in the world. In comparison to the vast mountains, in this case, symbolizing the world, the tale of Fred and Lyz is minuscule. It may sound callous but this story is only a fragment of the untold ones in the world today, and Favier demonstrates this with her use of setting.

One of the most unique parts of Favier’s directorial debut is her use of the camera. In many other movies about sports, the camera is fairly unmovable and steady. Action shots are taken from sedentary positions and the actors performing the stunts aren’t engaging in any way with the camera. What Favier does is special because she fully engages the audience in the skiing scenes. The camera often follows Lyz from behind, tracing the same exact route she does. We watch as she swerves one direction and we follow only moments after her. It’s an extremely clever way to capture the attention of the audience.

Another brilliant part of Favier’s debut is the way she portrays women in a very feminine way that only a female director could do. Favier directs Abita well as the actress switches between a young adult in a rush to grow up and a child with naivety of the world around her. Abita is a girl growing up in a man’s world and is able to convey that even without words. Abita plays Lyz extremely well in a way that feels truthful and sincere.

Lyz has a million things to worry about and it’s clear that the child is overwhelmed with the promising prospect of becoming a professional skier. It doesn’t help that she’s involved in a suffocating romance with Fred and has to deal with those issues on top of everything else. Abita is a very well-rounded character and a perfect look into the world of ‘Slalom’.

Besides the story of Lyz, Favier also manages to tell the stories of the ensemble cast of women. In fact, out of the six actors with names on IMDb, four are women. Of these women, each is given room to shine and their own character arcs. Sure, they involve Abita in some capacity, one is her mother and another is the wife of Fred, but their entire existence doesn’t feel sole because of our protagonist. They feel like full-fledged people with their own goals and aspirations, a very refreshing sight in a film.

The Truth Behind Abuse In The World of Sports

Unfortunately, sexual coercion and abuse are not uncommon in the world of sports, especially among high-profile athletes. One of the most known cases is Larry Nassar who is alleged to have abused at least 250 women. He was a widely known gymnastic doctor for the USA Gymnastics national team and a professor at Michigan State University. The allegations go all the way back to the early 1990s and even include female members of the Olympic team. While there were accusations against him as early as the mid-1990s, there was nothing done about it until 2015. It’s a sickening abuse of power and many of his victims were barely teenagers when he molested them. Nassar wasn’t the only coach who abused his position though.

The case of Jerry Sandusky is another very well-known case in the world of sports. What was unique about Sandusky is how he abused male athletes. Being sexually assaulted comes with a lot of stigmas but there’s even more judgment toward male victims. They are often given more criticism than female victims and because of this, are scared to come forward with their stories. Sandusky of course knew and abused his power. As well as that, Sandusky taught football at an NCAA Division 1 football school where people wanted to be on his good side in order to get playing time. The even more horrific thing about Sandusky was that many of the boys he abused were members of his non-profit charity and that’s how he met them.

The saddest part of these stories of abuse is how often victims are ignored in order for the system to make money. Many of these bigger organizations decided not to look into the accusations against high-profile members of their community. No matter if the athlete went on to win an Olympic Gold Medal or even the Super Bowl, the organizations protected the whole more.

Unfortunately, the system failed hundreds of people and that’s only encompassing the two cases I brought up. Sexual abuse in the sports world is still a prevalent issue, Nassar and Sandusky were both only charged in the last decade for actions they’ve done for twenty or more years. There needs to be a change and ‘Slalom’ is a good step forward because it shows the horrors of abuse. It shows the reality of the situation, how these coaches groom these children and abuse them, and the children are powerless to stop them. ‘Slalom’ was as ugly as it was beautiful because it showcased the monstrosities who still work in the sports industry, and who must be brought to justice.

‘Slalom’ is available to watch at a limited number of theaters.