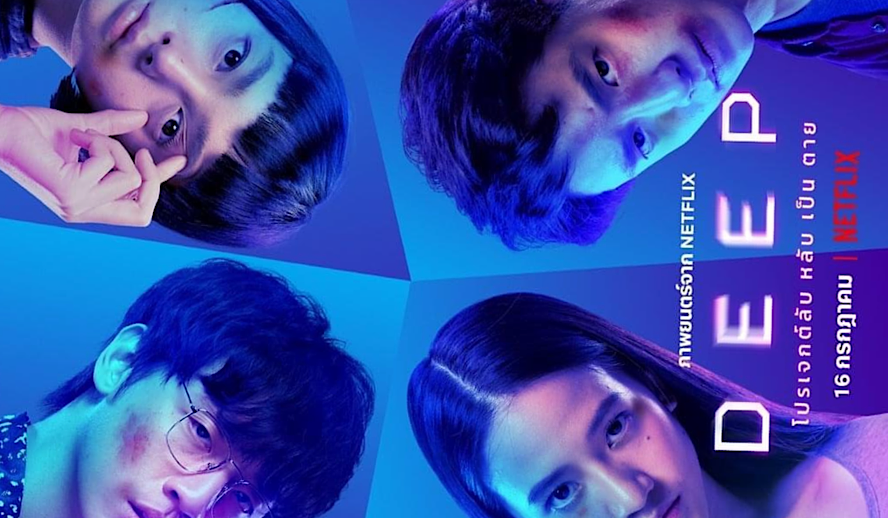 New to Netflix this week is Thai film, ‘Deep’, from the directing team of Sita Likitvanichkul, Jetarin Ratanaserikiat, Apirak Samudkidpisan, Thanabodee Uawithya, and Adirek Wattaleela. The film follows a group of insomniac med students who volunteer for a neuroscience experiment that requires them to stay awake for an extended period of time. When the experiments turn deadly, the four students, portrayed by Panisara Rikulsurakan, Kay Lertsittichai, Krit Jeerapattananuwong, and Supanaree Sutavijitvong, must fight to survive.

‘Deep’ is the perfect example of a film that is a truly mixed bag. While there are many moments, aspects, and ideas of the film that intrigued and even impressed, there were equally as many moments that did not resonate as the filmmakers had hoped. This imbalance between what worked and what did not seems to be the film’s penultimate struggle that never is truly resolved before the credits roll. Something to note for the purpose of contextualizing the review: the film is far more a teen, coming-of-age movie than it is a thriller or horror film. While there are suspenseful elements of the film, we spend the majority of our time with the teen characters being teens rather than their fights for survival.

Technically the film is pieced together well for the most part — the cinematography of the film is non-distracting and even a distinct positive at points in the film. A few shots, in particular, stood out to me as interesting such as a camera being mounted to the actor’s chest as they fell. While this could have been shot in a wide, it was far more visually interesting and effective in this more creative way of shooting the shot — I appreciated the filmmakers putting in the extra effort to achieve that shot.

The filmmakers implemented a lot of style into the direction and editing of the film. The film has several, very chaotic montage sequences that harkened back to some of the montage sequences seen in Phil Lord and Chris Miller’s reboot of the Johnny Depp television show,‘21 Jump Street’, starring Channing Tatum, Jonah Hill, and Brie Larson. The montages are tight and have a lot of quick imagery which fit tonally for what the film was going for.

The film has a lot of non-diegetic text that flashes on the screen that reminded me of films like Edgar Wright’s ‘Scott Pilgrim vs. the World’ that starred Michael Cera, Mary Elisabeth Winstead, and Chris Evans as well as ‘Nerve’ which starred Emma Roberts and Dave Franco. The score of the film is also very impressive and fun, reminiscent of 80s synth scores that have been replicated in media such as the nostalgia-filled ‘Stranger Things’ starring Finn Wolfhard, David Harbour, and Millie Bobby Brown. The standout performances of the film come in the form of Panisara Rikulsurakan as Jane and Kay Lertsittichai as Win.

Both give the most compelling performances in the film and pull off the mental and physical fatigue the characters are experiencing exceptionally well. A sequence of the film that worked particularly well was that of the opening of the film which is nail-biting, to say the least. The opening of the film instantly had me intrigued and worked great as a hook into this world. Another few standout sequences came in the form of when our protagonists were drowsy.

The filmmakers implemented very disorienting pulls of focus that work very well to put us in the shoes of the characters — the audience begins to feel as tired as our protagonists. The general premise of the film these characters inhabit is an intriguing one and led to some opportunities for some interesting scenes such as seeing the teens try to find different ways to stay awake.

While the basis for the film’s plot is an interesting one, the film’s Achilles Heel comes in the form of how that plot evolves. The film has a problem with the rules it sets up for itself. While the reason for this experiment becomes clear, the methodology of how we get to this conclusion feels extremely flawed and convenient. The film also has a huge problem with setting its stakes.

There are points in the film where the characters seem to not at all be taking seriously what feels like an imminent threat and then at other points the stakes are raised by characters for seemingly no gain of their own. The characters in general make a lot of decisions that don’t always feel backed up by their own motivation or logic which makes the plot feel very contrived in the way it plays out. It felt like the filmmakers had a cool idea of where they wanted to take the story, but had trouble getting from Point A. to Point B. while still making logical sense.

Overall, the film, unfortunately, does not give enough to its characters to make them compelling and often utilized twists and reveals that in hindsight seem to undermine the film’s story and the relationships it builds between its characters by the end of the film. Fairly major plot points and characters get quickly ignored and, by the end of the film, completely forgotten. The filmmakers clearly had a story they wanted to tell but unfortunately the overcomplicated plot and odd character decisions hampered the film overall — finding a way to give more context to these choices or aspects of the plot that seemed overly complicated could have gone a long way in smoothing out the watch.

‘Deep’ is a film that starts off strong but lost me somewhere along the way. While directed and edited well, the film’s story and characters are not innovative enough to make the film’s admittedly unexpected ending work and pack the punch that the filmmakers had hoped it would. While the film disappointed me, I would recommend anyone interested in the film to give it a watch to form their own opinion. There is much to like and lots to learn from in the film that may be beneficial to those intrigued by the premise.

Check out ‘Deep’ on Netflix today. Be on the lookout for Netflix’s next foreign film release, ‘Chernobyl 1986’ from Russian filmmaker Danila Kozlovskiy.