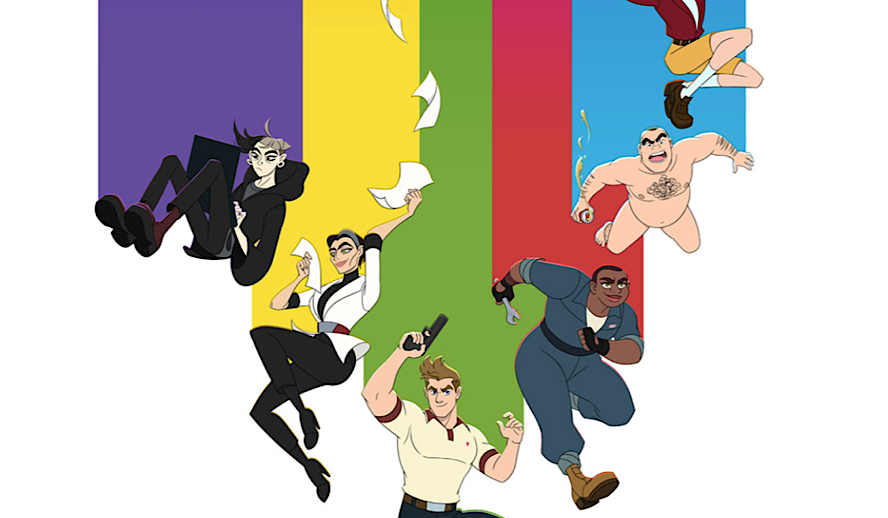 Netflix and Adult Swim have been the places to go for animated series for adults, with Adult Swim’s successful ‘Rick and Morty’ and Netflix’s critical darling ‘BoJack Horseman’. Netflix has recently added a new series to its adult cartoon lineup with ‘Q-Force’, a half-hour series that follows a secret agent group of LGBT+ spies trying to save the world. While the series received poor initial reactions from its trailer, it’s always important to not judge a piece of art on its often soulless marketing. Is ‘Q-Force’ as bad as its initial trailer? No, it definitely isn’t, but it is a mixed bag of good plotlines, bad jokes, and some tired gay stereotypes.

Q-Force’ offers some clever details and plot lines to the tropes associated with spy stories. One of the best plotlines of the first season is when the team’s mechanic, Deb (Wanda Sykes), has to save her wife, Pam (Ali Liebegott) after she is kidnapped. This is where the story takes a bit of a break from its comedy and deals with Deb’s own guilt and anxiety. The series then puts a fun twist on the trope of “my lover, the spy” and makes the couple complete couple’s therapy to deal with the realization that Deb is a secret agent. Moments like this that experiment with the secret agent format are the show’s strongest moments, from having a drag queen as the team’s master of disguise to V (Laurie Metcalf), the deputy director, being a workaholic. When the show experiments with typical spy stories and tropes are when the show is at its funniest.

Regarding the characters, Steve Maryweather (Sean Hayes) is a good protagonist. He is upset that his secret agent team is always forgotten about by the fictional American Intelligence Agency (AIA) because of homophobia and wants to prove his worth. His rivalry with Agent Rick Buck (David Harbour), a straight secret agent tasked to “babysit them,” also leads to some comical moments. Rick Buck is the perfect foil character for a series like this, a stereotypical straight man who loves the smell of his own farts just so he can experience what he’s had for lunch. Their antagonistic dynamic is fun to watch and the writers clearly had fun using Rick as a source for mockery (as a Philadelphian, it makes sense that Buck is from Philly).

The animation for the series is stellar, being done by the same team behind ‘Venture Bros’, Titmouse, who never disappoints. The series looks like a mixture of a comic book and of an old spy cartoon that would be on Saturday mornings in the 1980s. This causes ‘Q-Force’ to have a unique look from other adult animated shows, which are arguably starting to all look like clones of ‘Big Mouth’. While the series has great animation and some good storylines supported by interesting protagonists, there are some weak spots that really bring the show down.

What Doesn’t Work About Q-Force?

‘Q-Force’ is a comedy series where a lot of the jokes fall flat. For every joke in the series that makes you laugh, with many of them being delivered by Patti Harrison’s hacker character, Stat, there are then two jokes that fall flat. The jokes that fall flat are just pop culture references that one would have seen on a Buzzfeed list in 2013, from references to Harry Potter to gay icons like Jackée Harry. Some of these pop culture references barely work as constructed jokes and act more as name drops to make the audience say “oh, I know that reference”. This type of humor is constant, happening about a couple of times per scene, and can really drag the energy of the show down.

‘Q-Force’s’ trailer was originally panned for its use of tired gay stereotypes, and while the trailer made them much more apparent than the actual show, the stereotypes are still there. The character of Twink (Matt Rogers) is the biggest culprit of this, being a dramatic and self-absorbed drag queen who is often the one either making the tired pop culture references or saying Tumblr buzzwords like “safe space”. While these can be fine components to a character, this seems to be Twink’s only character, making it very confusing if he’s supposed to be a loving portrayal of the modern gay person or a mockery of the modern gay person.

This ultimately makes Twink more of a tired stereotype than an actual character. Then there are some gay stereotypes that are just a little confusing. For example, in the series, Buck nicknames Steve “Mary” as a homophobic dig, yet all the characters, even those who hate Buck, only refer to Steve as “Mary”. If this is a way of Steve reclaiming the slur that his arch-enemy called him, then the show never really delves into the power of that (the same can also be said about Twink’s name, yet he seems a little more self-aware).

There are a lot of aspects of ‘Q-Force’ that try way too hard to be hip and cool, on the same level of “how do you do, fellow kids?”. Perhaps the character of Twink is neither a negative nor positive portrayal of the modern gay person and is just the show’s way of trying to seem cool. Twink is the character that makes the most pop culture references and loves all things that corporate marketing believes all gay people like (drag, Eurovision, Grinder, Brittany Spears). The same can especially be said on all the pop culture jokes and references, where half the barely qualifying jokes will feel dated a year from now when other trends take over. This reliance on trying to be cool and hip is the show’s weakest spot, leading it to feel dated even though it just premiered.

‘Q-Force’ is a mixed bag of good ideas and a desire to be as cool as possible. For every joke that is funny, there are two to three more jokes that will cause you to groan. For every plotline that heightens your interest, there will be a failed attempt at the show to appeal to the “cool kids”. It’s a shame because, for every one thing about the show that holds up, there is something that will bring it down, leading the series to fall flat in the end. This all causes ‘Q-Force’ to be a more forgettable show than anything, since it’s nowhere near bad enough to be memorable, nor is it good enough to make for an engaging binge watch.

‘Q-Force’ is available to stream on Netflix