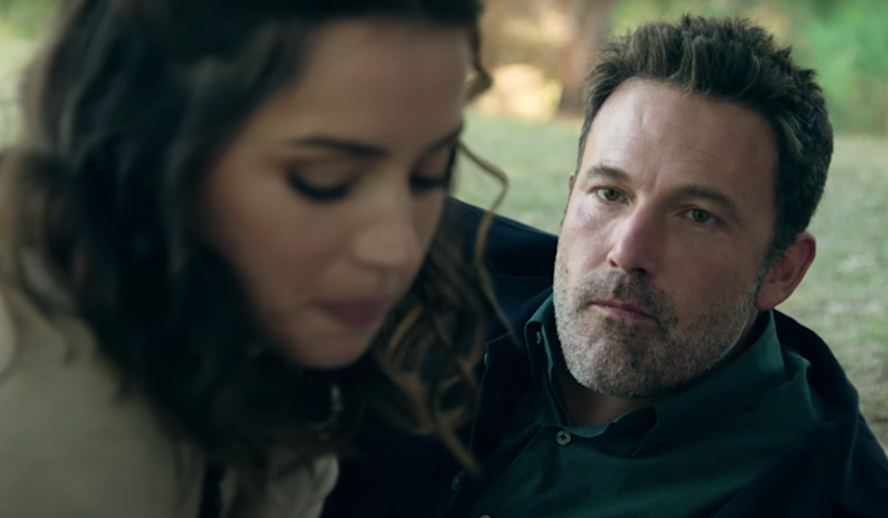 A well-to-do husband (Ben Affleck) who allows his wife (Ana de Armas) to have affairs in order to avoid a divorce becomes a prime suspect in the disappearance of her lovers. When I first saw the trailer on YouTube, it immediately caught my eye because it looked like an interesting film that I’ll enjoy. After watching the trailer, I put it on my watchlist and waited for Hulu to release it because I really enjoy psychological thrillers and it felt similar to another Ben Affleck film ‘Gone Girl’. That film is the best psychological thriller that I have ever watched and going into ‘Deep Water’ my expectations were a bit high because I was expecting that the films would be similar but I was wrong.

After a 20-year absence, Adrian Lyne returned to direct this film and the screenplay is by Zach Helm and Sam Levinson so I have gotten used to Levinson’s writing due to ‘Euphoria’. After watching the film, it’s clear as day that Levinson was involved in this because the writing in this film feels very similar to ‘Euphoria’ because it falls flat in the end when it comes to the characters and plot of the film. There’s so much this film could’ve done to make it more of a psychological thriller because it feels more like a predictable thriller film. I had more questions about the characters and the plot after it was over and there are so many things I want to change about this.

When watching the film, I was figuring out the Melinda Van Allen (Ana de Armas) and Vic Van Allen (Ben Affleck) motives and personalities because it’ll make me understand their actions throughout the film. ‘Deep Water’ is also supposed to be an erotic thriller and I see that in the sex scenes but it doesn’t answer the question of why Melinda is having sex with other men and why Vic won’t divorce her. There’s one moment in the film that implies that Melinda is on a marriage visa but the film doesn’t explore her character outside her relationship with Vic so I won’t know why Melinda is having sex with other men. Also, Vic doesn’t help fill in the dots because he watches his wife flirt with other men then gets agitated but he doesn’t do anything to stop it. Therefore, my main question is why does Vic lets his wife flirt and sleep with other men if it always ends with the other man dead.

I guess it is psychological because during the film you’re confused about who Vic is as a character because we do get little backstory explaining how he makes his money but there are no deeper details about his and Melinda’s relationship. There’s never a time throughout the film that made me question if Vic killed Melinda’s lovers because it’s clear as day that he did it and he even admits it in the first act of the film. It would’ve been better if the audience was shown why Vic lets his wife have affairs because it would’ve added complexity to the story and cleared up the confusion.

The audience is just as confused as Vic’s friends because they’re even questioning why she flirts with other men in front of other people because everyone knows that they’re a couple. Another thing that could’ve been done to make it more erotic is the reason Vic allows Melinda to have affairs is that it’s a kink of his but he takes it too far by killing her lovers without her knowing. It could’ve been a more psychological thriller by making the audience question if Vic is the suspect by not showing that he’s angered by the affairs but by actively supporting it.

Better as A Limited Series

I can see this film being better as a series because the writers could’ve gotten more time to flesh out the characters. I know that Levison did a great job in the first season of ‘Euphoria’ by giving each character their own episode, if Melinda and Vic got their own episode we get to see how many affairs Melinda is having and how Vic is getting away with the murders. The other characters in the film like Don Wilson (Tracy Letts) could’ve had a major role in the series by being the one that jumpstarts the investigation of Vic and being a foil to him while his wife Kelly Wilson (Kristen Connolly) is being charmed by Vic and doesn’t believe he could commit such a crime. This would’ve definitely added more complexity to the characters and the audience would want to root for someone because I wasn’t rooting for anyone in the film.

Both Melinda and Vic are unlikeable in the film because of their actions and the only person you end up liking is their daughter, Trixie Van Allen (Grace Jenkins) because she steals the show by being an emotionally intelligent kindergartener. She is the only thing that’s holding Vic and Melinda’s relationship together but Melinda doesn’t seem to enjoy having a child so it seems like the only thing that keeps their relationship to together is the affairs. Throughout the film, Melinda flips between loving Vic then hating him then to loving him again because she’s back having an affair. The film could’ve explored why Melinda wants to have affairs and why the couple doesn’t decide to have an open relationship to avoid the drama, if this was a series we could have gotten a conversation between the two about why an open relationship wasn’t an option.

In the end, this film could’ve been good if they made the story and characters more complex, the actors did a great job at portraying the characters from what they were given. I wish this film would’ve shown more of the relationship instead of Vic’s pet snails because the snails didn’t add anything to the plot and it didn’t make me feel sympathy for Vic just cause he’s shown taking care of a small animal. It showed more that Melinda doesn’t care about her husband’s hobbies and me concluding that their relationship isn’t a romantic one and thus I give this film a four out of 10 snails. If you’re a fan of Ben Affleck and Ana de Armas then you’ll have fun with the film and enjoy it.