‘That Dirty Black Bag’ Season One: Starring Dominic Cooper and Douglas Booth, Finishes Much Stronger Than It Started 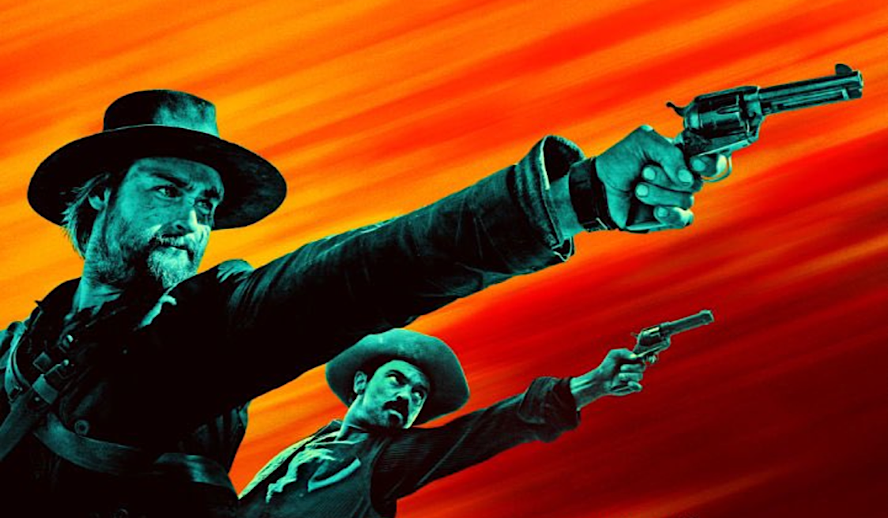 After a hurried first few episodes that race to establish most of the show’s major characters, ‘That Dirty Black Bag’ finds its groove, and all of the setups steadily pay off. AMC’s modernized spaghetti western aired its finale last week, and it’s one hell of a ride. Gritty, horrific, picturesque, and bleak, this show does not shy away from the Italian Neorealist roots of the genre. Though not for the faint of heart, and not affirming much good in humanity, ‘That Dirty Black Bag’ develops its main characters in such a way that you see more primal humanity emerge through all of the brutality and spectacle. One that’s based on survival, confusion, and pain.

In the world of ‘That Dirty Black Bag,’ violence, lying, and cheating are normal. They turn out to be, in and of themselves, lesser evils when compared to glimpses of activity we see from people who follow the teachings of a mysterious, occult text. The bizarre thriller scenario that kicks off in the first episode when Red Bill (Douglas Booth) is captured by a preachy cannibal (Aidan Gillen) turns out to be connected to this larger, mysterious thing. The creator of the show, Mauro Aragoni, uses this to great effect. By establishing early on just how depraved someone can be, he primes us to have a more forgiving attitude toward the killers and liars whose stories we follow most closely. They are at least vulnerable and human in the same way we are, despite their glaring flaws.

Violence in ‘That Dirty Black Bag’

Let’s clear something up here. Killing scores of people is still a bad thing. Whenever violence in a show seems gratuitous, you should question that. Violence has long been romanticized in movies and television, and too often for the production of unmeaningful and soulless media. The violence in ‘That Dirty Black Bag’ is definitely gratuitous. The number of scenes where someone repeatedly bashes or hacks at someone who is already dead, for example, nearly devoids that act of meaning.

That said, violence, on the whole, serves a purpose in the show. The few characters who don’t reflexively resort to it stand out, and you hope for them to be better than they are. Take Steve (Christian Cooke), for instance, a farmer who believes God told him two things: rain will come to end Greenvale’s five-year drought, and he must keep secret the gold on his land because it only leads to evil. The rain finally comes at the lowest moment in Steve’s life, and by then his family life hangs on by a thread. When he ultimately succumbs to violent means to preserve what’s left of his family’s humble existence, the glimmer of purity that his growing fields have come to represent is extinguished.

Some of the outrightly gruesome moments in the show are hard-hitting, like the scene when the bounty hunter Anderson (Travis Fimmel) is suddenly shot by one of the dead men he carries around in his cart. Young Bill (Francesco Piacentini-Smith) scrambles to find where the shot came from, sees a not-so-dead man pointing a gun at him, and manages to shoot first. He then proceeds to decapitate each body and put their heads into a bag, and thus we learn where his “head weighs less than a body” adage comes from. Seeing Anderson, the most swaggering figure of all, slumped over dead at the hands of one of his bounties, speaks volumes about how Red Bill became the way he is.

I could do with less shock-and-awe violence, but in today’s entertainment landscape it takes a lot to surprise audiences the way that Sergio Leone and Sergio Corbucci did in the late 60s. I don’t want to entirely dismiss Aragoni’s intelligent uses of violence, even if they are crowded on all sides with less inspired ones.

The Importance of Episode 4

Most TV and film critics receive episodes/movies ahead of their release schedule. These “screeners” allow critics to generate informed opinions about shows and movies that audiences can use to help decide whether or not to watch something when it comes out. In the case of television especially, it’s helpful for critics to have more than one or two episodes to base their opinions on. In their weekly series of questions posed to critics, IndieWire asked TV critics how many episodes they need to see before writing a review. It’s a quick read that will help you better understand how different critics interact with screeners.

For ‘That Dirty Black Bag,’ critics received the first three episodes for review, and I firmly believe that the show would have had a better, wider reception had the fourth episode, “Genesis,” been included.

The first three episodes feel a little aimless because the protagonists seem aimless. You don’t understand, at first, what lies behind their motives, so none of the violence and posturing seems particularly meaningful or justified. The fourth episode, dedicated entirely to the backstories of Sheriff McCoy (Dominic Cooper) and Red Bill, contextualizes what came before and imbues with meaning everything that follows. McCoy, in my eyes, transformed from being a sociopathic despot to being the heart of the show, a would-be-escapee desperate to return to a simpler life in Italy. His history is, in a way, the show’s crux. He was violent as an adolescent in Italy, but the nature of the violence and depravity he has since witnessed makes you wonder what makes someone truly, unforgivably evil.

As all good spaghetti westerns do, ‘That Dirty Black Bag’ winds up making antiheroes of its morally gray leads. In the final few episodes of the season, the nefarious gang of hitmen headed by McCoy’s brother Bronson (Guido Caprino) arrives in Greenvale, threatening to make matters in the already dismal town worse. Meanwhile, Bronson’s sponsor for governorship, Hellen (Anna Chancellor), is revealed to be a participant in a cult of human sacrifice. Red Bill and Sheriff McCoy seem like the only two gunslingers hardened enough to confront such evil.

Whether there will be a second season remains unclear, though season one left quite a lot unanswered. We still don’t know the full scope or origin of the occult text or the pervasive eye symbol that heralds it, nor do we know how Bronson’s crew formed or what the repercussions will be after the death of some of its members.

I wouldn’t call ‘That Dirty Black Bag’ groundbreaking exactly, but it sets up a grim world rife with moral quandaries, digging just a touch deeper than spaghetti westerns that preceded it. Season one builds into something rather gripping to watch, and I can only hope it won’t become another casualty of the preemptive cancellation craze that has overtaken streaming networks.