Movies and Television Shows to Watch for June 2022 Pride Month! 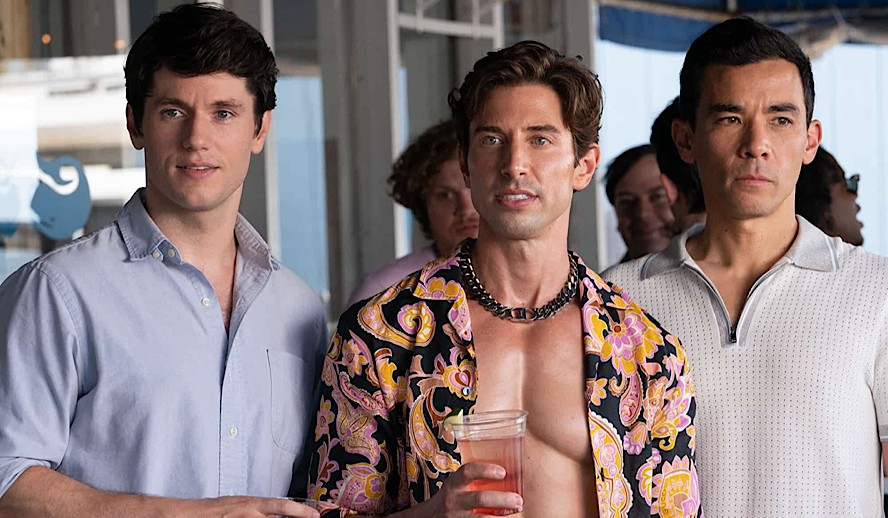 Pride Month (formerly known as June) is coming up in just a couple of weeks! If you’re looking for something to do after work, between parties, or while you’re social distancing, here are some upcoming or currently streaming movies and television shows you can watch to celebrate pride stories and creatives.

Every queer peer (say that five times fast) of mine has been talking about ‘Heartstopper’, and I don’t blame them. Based on the webcomic/graphic novel of the same name, ‘Heartstopper’ is a slice of life show that, although dealing with some heavier topics (like bullying and coming out of the closet), is primarily a feel-good experience. The show centers around Charlie Spring (Joe Locke) and his developing romantic relationship with the school’s popular rugby player Nick Nelson (Kit Connor). Along with these two come Charlie’s lovable band of friends that support each other through their coming of age venture. If you’re looking for something to warm your heart for this upcoming pride, ‘Heartstopper’ is the show for you. Now streaming on Netflix.

Declared as “the best queer show on TV right now” by Out magazine, ‘Our Flag Means Death’ takes on the world of gay, asexual, trans, and nonbinary pirates of all different racial identities. Our protagonist Stede Bonnet (loosely based on the real Stede Bonnet and played by Rhys Darby) abandons his comfortable family life to pursue a life of piracy where he meets the wonderful and unexpectedly rainbow world of Revenge, the ship he captains through a series of adventures. The show takes the time to represent older queer characters, love triangles, polyamory (Leslie Jones’ character has 19 husbands!), and casts out and proud members of the LGBTQ+ community! In the words of Mey Rude, “this show has every type of gay character you can imagine and it’s about us in a way that’s distinctly for us too.” You can watch ‘Our Flag Means Death’ on HBO!

If you grew up watching ‘Girl Meets World’, this one may give you some nostalgia. ‘Crush’ stars Rowan Blanchard as Paige Evans, a high school girl who, during the pursuit of her longtime crush Gabriela Campos (Isabella Ferreira), falls for AJ Campos (Auliʻi Cravalho), Gabriela’s twin sister. GASP. Although the Hulu original film is a queer coming of age story, it’s not a coming-out story. The characters’ sexualities, whether they’re queer or not, are completely normalized and just a part of their everyday lives. There’s no anxiety about their identities or fear of condemnation from their family and friends, just stress over crushes and school elections. This feel-good film is a good example of Gen-Z’s acceptance of their LGBTQ identities. And Megan Mullally is in it, so, you already know it’s funny.

The third legendary season of the legendary show ‘Legendary’ is finally here, and just in time for pride! ‘Legendary’ is a competition show for members of ball culture and features LGBTQ houses – in ball culture, “houses” are chosen queer families – voguing, dancing, and walking the runway for $100,000. Ball culture originated with Black and brown members of the LGBTQ community in the late 1800s and became a space for gender-bending, drag, and runway categories that houses would compete in. ‘Legendary’ brings this subversive culture to the mainstream and features queer and POC figures such as Jameela Jamil, Law Roach, Leiomy Maldonado, MikeQ, and Tanisha Scott. And, brilliantly, to help draw even more of the Gen Z/millenial crowd, the show had Megan Thee Stallion as a judge on seasons 1 and 2 and has replaced her with Keke Palmer for season 3. But that’s not the only gag of this season, wink, wink. To find out more and witness the fierceness of the ballroom, watch all three seasons of  ‘Legendary’ on HBO now!

I have been waiting for Bowen Yang to follow in the footsteps of dozens of ‘SNL’ stars that get to star in their own movies, and finally, we’ve got it: Introducing ‘Fire Island’ coming out June 3rd on Hulu! Bowan Yang, Joel Kim Booster, Margaret Cho, and Conrad Ricamora star in this romantic comedy about best friends who travel for a week-long vacation at the gaytastic getaway Fire Island. This film not only features two gay actors as leads but four Asian actors with top-billing in an LGBTQ story. In Hollywood, it’s been rare to see Asian actors/characters take the lead in stories that aren’t centered on ethnicity, and I’m thrilled about seeing some representation. So if you can’t make it out to Fire Island, enjoy it from the comfort of your own home on June 3rd on Hulu!

‘Three Months’ takes on the daunting task of telling the story of a teenage boy who becomes exposed to HIV and has to wait to learn his status. We follow Caleb, played by the out and proud singer Troye Sivan, as he bikes around Florida and waits for the dreaded test results for the necessary three months. Along with Sivan are three iconic actors of higher caliber Ellen Burstyn, Judy Greer, and Louis Gossett Jr., who all add a mature balance to Sivan’s debut as a film lead. It’s been a long time since I’ve seen any film address the sexual health of young queer people, and I think it’s just as important to tell their stories today as it was 20 years ago. The film has received mixed reviews from fans and critics. However, I believe the subject matter in itself – and the fact that Burstyn is in it – makes it worth the watch for this upcoming pride. ‘Three Months’ is available to watch on Paramount+!

In a previous article, I just roasted ‘RuPaul’s Drag Race All Stars 7’ the house-down boots. BUT, that does not mean I don’t think it’s a June pride staple: ‘RuPaul’s Drag Race’ has become one of the most important television shows in queer history! Every Friday it introduces us to incredible drag artists and brings together members of the queer community for watch parties. Entire friend groups are made because of this show! And this season, ‘All Stars 7’, promises to be a hot topic, as it features – for the first time in ‘Drag Race’ herstory – all winners: Eight previous winners of ‘RPDR’ are returning to battle it out for a grand prize of $200,000 and the title of Queen of All Queens, and this mashup of award-winning talent promises to be a season to remember. On May 20th, start your engines, ‘cause ‘RuPaul’s Drag Race’ is coming to Paramount+ just in time for pride!

Even though they won’t be ready for pride season, pride is… all year long! After June, there are tons of queer actors and characters coming to your home screen, including but not limited to: queer actresses Keke Palmer and Barbie Ferreira in ‘Nope’, the coming-out film ‘Am I Ok?’, the beautiful bisexual Harry Styles in ‘My Policeman’, Billy Porter’s directorial debut with ‘What if?’, the Barack and Michelle Obama produced biopic ‘Rustin’, and more! Thankfully, in our modern-day, our world is supporting more and more LGBTQ people and stories, and 2022 promises to be packed full of them.