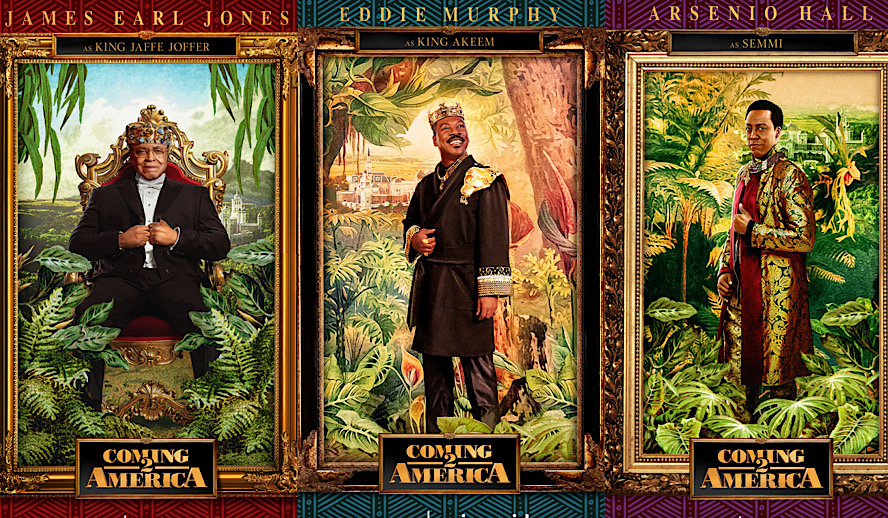 ‘Coming 2 America’ has an opening sequence that may strike you as old-fashioned, with its sweeping aerial footage, grand orchestral score, and fade-in-and-out credits. Of course, if you revisited the original ‘Coming to America’ in anticipation of its sequel, you’d see the immediate resemblance–the original opens in exactly the same way, except its painted-set Xanadu-esque depiction of Zamunda is replaced by modern CGI and Rick Ross’ Georgia megamansion.

Much of the film pays direct homage to its predecessor in this way, and it’s actually quite charming to see such a thorough cast reunion after 33 years–not only do Eddie Murphy and Arsenio Hall reprise their starring roles as Prince Akeem of Zamunda and confidante Semmi, but so do a myriad of supporting cast members including Shari Headley, James Earl Jones, John Amos, Louie Anderson, and Vanessa Bell Calloway. Even the film’s original writers returned, those being David Sheffield and Barry W. Blaustein (along with relative newcomer Kenya Barris, who created ‘Black-ish’).

‘Coming 2 America’ – Putting a Twist on an Old Premise

The premise of the film is about as straightforward as the first one–Akeem learns that he has an illegitimate son, Lavelle Junson (Jermaine Fowler), and returns to America to find him. It’s not particularly complex, but neither was the original–in fact, that was part of its charm. Prince Akeem’s storybook-romantic quest to find the love of his life is humorously pitted against the grungy reality of late-’80s New York, combining the classic fish-out-of-water story with a reverse ‘Cinderella’ that’s topped off with Eddie Murphy’s sharp, young comedy.

‘Coming 2 America’ does a wonderful job of acclimating Zamunda to the 21st century, as well as reestablishing a world and characters that instill a great sense of continuity–but the film actually suffers from a storyline that’s surprisingly more complicated than it needs to be. Threatened by the unstable bordering nation of Nexdoria (whose leader, General Izzi, is played by a relishing Wesley Snipes), Akeem is motivated by the need for a male heir to strengthen his authority. In finding and grooming his long-lost son for the throne, he angers his eldest daughter who’d long anticipated the throne herself.

The full set-up is actually somewhat Shakespearean (in both structure and theatricality, perhaps also benefiting from James Earl Jones’ timeless gravitas), and there’s a number of interesting possibilities for compelling drama–Tracy Morgan, for instance, plays Lavelle’s Uncle Reem, a surrogate father who cares for Lavelle as if he were his own.

An American in Zamunda

Of course, ‘Coming 2 America’ is a comedy, not a drama, and it’s for this reason that the plot seems to promise more than it needs to. For starters, there isn’t a lot of America in ‘Coming 2 America’–Akeem drops by for about ten minutes to pick up his son, and then it’s back to Zamunda, where Lavelle, along with his mother Mary (Leslie Jones), replaces his father as the fish-out-of-water.

There’s a biting relevance that’s present in the original and missing here. Young Prince Akeem, nearly mythical in his social status and naive optimism, finds what he’s looking for in the profoundly un-mythical grime of New York City–Lavelle, on the other hand, must prove himself through a series of trials before accepting his heirship, which includes collecting a Lion’s whiskers to prove his courage.

In the end, it just doesn’t feel organic. Keen observers might also recall that in the original, Prince Akeem never slept with anyone (aside from his Zamundan sex servants)–in fact, he’d made it explicitly clear to his lascivious sidekick that, rather than spending his time “sowing his royal oats,” he’d be looking for a woman to truly love and spend the rest of his life with. The question, therefore, is, “How does Akeem have a long-lost son?” The answer: he’s raped.

In a flashback sequence that occurs early in the film (which features some decent digital de-aging), we’re shown that Akeem was drugged by Mary on a double-date gone wrong and subsequently raped. It’s truly an odd and repugnant way to retcon the character’s backstory in order to make way for this new adventure, and it’s made odder by the fact that ‘Coming 2 America’ was noticeably toned down to maintain a PG-13 rating.

In an interview with the Wall Street Journal, director Craig Brewer (who previously directed Murphy on ‘Dolemite Is My Name’) said, “If you look at the first movie, other than the gratuitous nudity of the bathers and some swearing, it is actually rather wholesome. It’s got a fairytale feel to it.”

The female nudity was certainly gratuitous (which was its own righteous justification in the ‘80s), but it can be argued that it contributed to the pure fantasy that is Prince Akeem’s life–his journey and motivation are likewise meant to be idealistic beyond reason, humorously juxtaposed with New York City (it’s actually comparable to ‘Enchanted’ in this regard). In ‘Coming to America’, swearing seems more like a natural extension of the contemporary New York vocabulary and its expression of insensitivity than it does a gratuity for the sake of an R-rating. ‘Coming 2 America’, on the other hand, feels restrained explicitly for the sake of its PG-13.

Ultimately, ‘Coming 2 America’ doesn’t quite live up to the 33 years of hype. Though it’s a loving and faithful send-up to the original, it struggles with an overreaching premise and a number of misguided moments that distract from what should be at the core of the film–Eddie Murphy’s comedy.

In 2019, Murphy confirmed that production on ‘Beverly Hills Cop IV’ would commence after the filming of ‘Coming 2 America’ had wrapped. If that’s still the case, I’d be curious to see how Murphy would revive that particular franchise–it couldn’t be worse than ‘Beverly Hills III’.

‘Coming 2 America’ is available to watch on Amazon Prime Video.