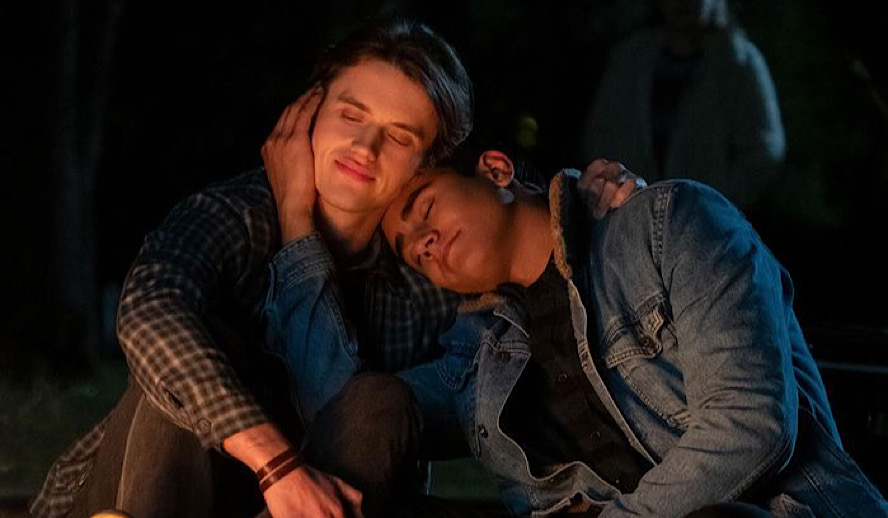 A term many critics will use when the second season of a show does not live up to its first is “sophomore slump”. Lots of shows suffer from this, especially when the first season gets much acclaim and positive feedback, making it hard to live up to the standards of the first. The second season of Hulu’s ‘Love, Victor’, based on the best-selling novel ‘Simon vs the Homo Sapiens Agenda’ and the hit movie ‘Love, Simon’,  both fall into this category and defies it as it puts the story of Victor to the back some while building up its supporting characters into becoming the strengths of the show.

The first season of ‘Love, Victor’ introduced us to Victor Salazar (Michael Cimino), a sophomore starting at a new high school in Atlanta after his family moved to the area for a fresh start. Over the course of the season, Victor works towards realizing and acknowledging that he is gay and how to come out and be gay in his world through correspondence with Simon Spier (Nick Robinson) who was one of the first openly gay kids to attend his high school.

We also see his parents figuring out what their dynamic is as a couple in Atlanta after moving there because of their marital troubles, his sister trying to find her place at school, their neighbor putting himself in with the Salazar family, and more of the kids at Victor’s school and in his friend circle. The season culminates in Victor’s coming out to his now ex-girlfriend and his family, leaving us with the cliffhanger of his family’s reaction.

While season one’s main focus was on its titular character, season two shines because of its supporting characters and secondary storylines. Victor’s parents (James Martinez and Ana Ortiz) give strong performances as they grapple with how to accept their son’s sexuality and their separation. We finally see more of Felix’s (Anthony Turpel) home life and learn more about who and why he is the way he is in a great storyline that highlights what it is like to be a caretaker for someone with extremely fluctuating mental health issues.

Pilar (Isabella Ferreira) discovers some new feelings for someone in her life and we watch her explore that. There is also Mia (Rachel Hilson) trying to find her way again within her new family dynamic and at school and in her relationships after she and Victor broke up at the end of season one and Lake (Bebe Woods) trying to find her footing in her relationship with Felix.

All of these actors and storylines were captivating in all of their scenes when they had their own storylines separate from Victor. The second season of a show tends to be when the side characters develop more, and these characters blossomed so much over the course of these 10 episodes that they ended up overshadowing the one person who is supposed to be the focus and center of the show.

While the growth of stories and depth of the secondary characters during season two was exciting and created captivating storylines, it did create one problem for the show: it diminished its central character. Victor is the titular character yet it felt as if his arc was cast aside for the better part of the season so these other characters could have their chance to shine which in turn lead to a slightly stale and cliched story for Victor.

Victor gets relegated to typical rom-com tropes, from worrying about losing his virginity, a love triangle, and parental approval of his partner. Were this show to have come out just a few years earlier, these kinds of stories would have been a very big deal but at this point in 2021 most of these tropes and stories have been worn out and just do not seem that interesting.

There is a give and take when it comes to this focus because Victor’s story being less interesting and his character being diminished comes because the other characters were grown; the show has started to take a turn for being more of an ensemble show. As much as I enjoyed all of the new storylines, when it puts the titular character’s growth at risk.

‘Love, Victor’ would certainly not be the first show to have this problem (looking at you ‘The Marvelous Mrs. Maisel’), but when a show which starts out having a clear lead and winds up splitting into more and more side plots unrelated to the central character, the quality of the show tends to drop some because there are simply too many different plots happening. While many shows thrive as ensemble shows, not every show is meant to be like that, and ‘Love, Victor’ is one of those shows.

Overall, season two of ‘Love, Victor’ was good. There was character growth, interesting storylines, and a great setup for season three. It is definitely evident that the creative team behind the show took advantage of being on Hulu this season (season one was originally supposed to be on Disney Plus but it ended up getting moved to Hulu) which definitely helped the show go deeper into some more of its mature discussions and topics that would not have been able to take place on Disney Plus.

I hope going forward they are able to strike the right balance between the secondary characters and Victor’s stories and find a way to better interweave them without the show losing its focus. If the show keeps going down its current path, I worry about the stories getting too muddled and the show losing the elements that gave it a spark in its first season. There is no question that the show’s greatest strength is in its representation beyond just the LGBTQIA+ community with its incredibly diverse cast, portrayals of different economic classes within a community, and mental health challenges. ‘Love, Victor’ does a lot right and, while it may have its weak points, is still a pretty good show. Some shows do fall prey to the sophomore slump unfortunately and ‘Love, Victor’ was one of those.

All episodes of season two of ‘Love, Victor’ are streaming now on Hulu.