Netflix’s ‘Heartstopper’ Series: An Embrace of The Queer Identity 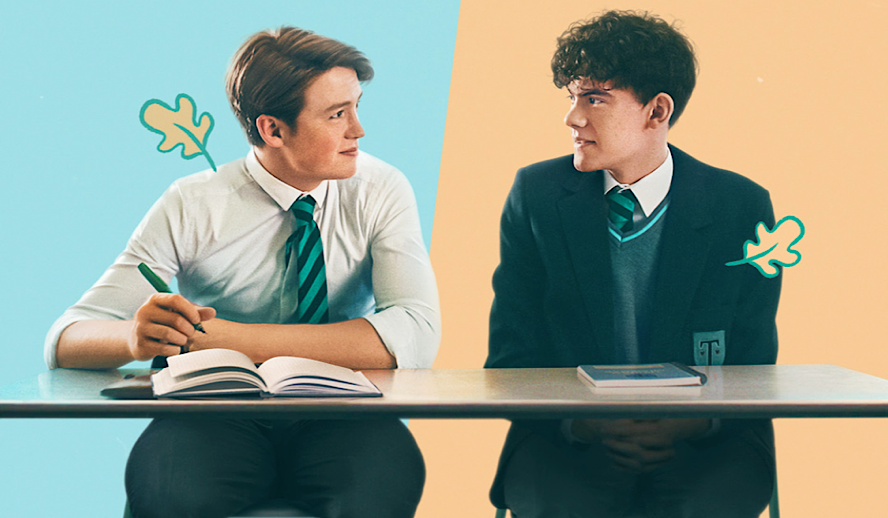 From Alice Oseman’s graphic novel, Netflix’s ‘Heartstopper’ is an adaptation of the young adult love story which examines both queerness and self-discovery. It is a coming-of-age story that captures both the confusing spectrums of innocence and maturity of adolescence. The series encompasses the energy and brightness of young love by incorporating animated aspects that reflect the illustrations of the novel. ‘Heartstopper’ is one season and has 8 episodes that range from 20-30 minutes and are all directed by Euros Lyn who previously directed episodes from ‘Daredevil’ and ‘His Dark Materials.’

The first episode opens up with our main character, Charlie Spring (played by Joe Locke), walking down the corridors of an all-boys grammar school in the U.K. Charlie is a timid character who unlikely befriends Nick Nelson (played by Kit Connor) after being seated together in one of their classes. The two are on completely different social ladders within their school setting. Charlie is known to be the quiet and sort of outcasted nerdy boy, whereas Nick is the known jock and rugby team captain. From quick exchanges in the school hallways, the two first develop a special friendship in the earlier episodes which soon sparked into a budding romance. Charlie, who is already out as gay, seems to immediately feel a romantic connection with him, but it is Nick who slowly realizes his feelings for Charlie which puts him in a position that questions both his identity and his sexuality.

The romantic journey between the two is the driving force of the series. We see both characters deal with finding self-acceptance and understanding what romance and love are during this complicated time of young adulthood. The series expertly captures the anxiety and butterflies of having a crush at the age of 15. We are also introduced to Charlie’s friend group who each go through their own designated challenges and are uneasy about Charlie’s relationship with Nick. His oldest friends, Isaac (played by Tobie Donovan) and Tao (played by William Gao) brings a fun dynamic. Tao specifically is alarmed by Charlie’s relationship with Nick as he is the overprotective friend who fears losing those he loves. He is afraid of being alone after their other friend, Elle (played by Yasmin Finey), a Black trans girl, transfers to an all-girl school.

The show also introduces us to Elle’s friends, Tara Jones (played by Corinna Brown) and Darcy Olsson (played by Kizzy Edgell), who are girlfriends and somewhat go through the same experiences as Nick and Charlie (although the show doesn’t thoroughly go into).  The challenge of change is something the characters explicitly deal with and is an underlying theme that is woven throughout the entire series. The relationship that these characters foster, whether it is romantic or platonic, provokes the curious nature that we all fear and also encourage during challenging times.

Queer representation tends to be a theme that most television series and movies miss the mark on. There are some films and shows where you feel like they are trying to overcompensate for something, but ‘Heartstopper’ is far from that. From transgender, lesbian, and gay representation, Oseman’s writing of self-discovery and the queer identity felt sincere. Paired with the acting of the young cast, they effectively capture the innocence in adolescent emotions. The show isn’t a story solely based on coming out but it more so entails the journey of accepting the change of an identity that you once were sure of. ‘Heartstopper’ understands how change is at the pinnacle of adolescence and it captures the young adult experience of navigating the journey of peculiarity.

Nick’s challenge of finding his identity is a depiction of this process. Charlie and him spend time with one another as friends, he even convinced Charlie to play for the rugby team. The show has its antagonists which is a group of bullies who are acquaintances with Nick. They are seen harassing Charlie for being gay alongside Tao, but as part of his journey of navigating his identity, Nick defends Charlie and leaves his so-called friends along the way. Nick and Charlie’s bond becomes something special and Nick starts to feel a change in himself as their relationship progresses. It was in a scene in his darkroom where he searches the internet for answers in order to further explore the queer identity. He takes an ‘am I gay’ quiz and watches ‘am I bisexual?’ videos to help him make sense of what he is experiencing. ‘Heartstopper’ does a great job in unraveling Nick’s journey of figuring out his own sexuality and by the end of the season, he comes to terms with his bisexuality. This then leads him to come out to his mother (played by Olivia Colman) in a very heartwarming and lovely scene that embraces pure acceptance.

Why You Should Watch ‘Heartstopper’

‘Heartstopper’ has everything you expect and need in a romance. It expertly captures the excitement of holding hands for the first time or sharing a first kiss with one another.  I appreciate how the show is all-around diverse amongst its characters and does not engage in the stereotypical tropes founded in the themes of coming of age. The path to self-discovery is grounded in reality and is not outrageously far-fetched in comparison to young adult dramas nowadays. The dynamic between the characters is wholesome and the foundation that drives this show home. Director Euros Lyn creates a lively and fresh adaptation that truly understands the curiosity of friendship and the LBGTQ+ experience.

In addition, I would like to praise the composer and music supervisors for their choice of music throughout the series as it perfectly captures what young teens are listening to. Overall, Alice Oseman effectively allows viewers to deeply empathize and relate to the struggles and joy of these characters. ‘Heartstopper’ treats the subject of queerness and identity with care while being a fun and refreshing watch that has you constantly pressing ‘Next Episode.’