‘Awkwafina is Nora From Queens’: An Absurd Look At Slackerdom 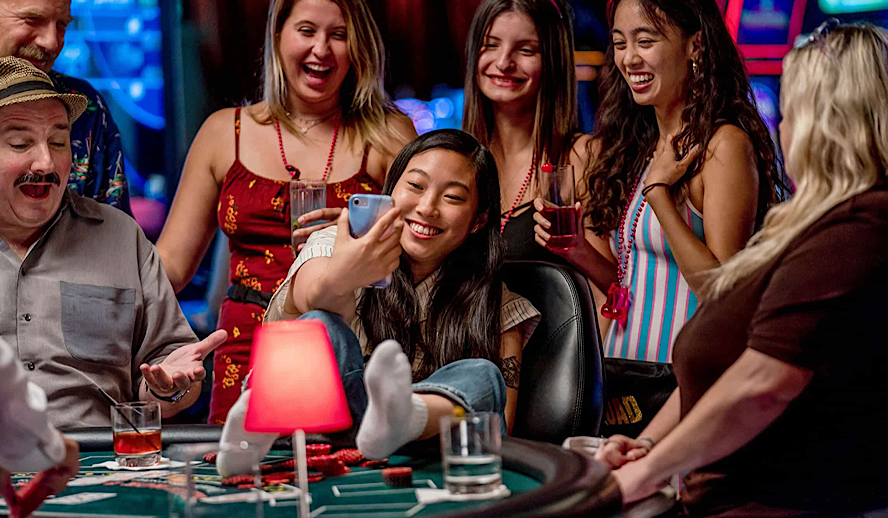 Photo: ‘Awkwafina is Nora From Queens’

Awkwafina has been having a successful year with films like ‘Shang-Chi and the Legend of the Ten Rings’ and ‘Raya and the Last Dragon’. This successful year is continuing with the release of the second season of ‘Awkwafina is Nora From Queens’, her series on Comedy Central. The comedy follows Nora (Awkwafina), a millennial who still lives at home with her father, Wally (BD Wong), and grandmother (Lori Tan Chinn). While the show has been marketed to be the new ‘Broad City’ since that hit series ended back in 2019,  ‘Awkwafina is Nora From Queens’ has yet to hit the same ratings. Despite the lower ratings, the series in its first season was an entertaining and funny look at slackerdom. ‘Awkwafina is Nora From Queens’, especially in season two, offers a surreal and hilarious look at what it means to be a slacker in a generation full of overachievers.

What makes ‘Awkwafina is Nora From Queens’ different from other comedies is that it does not take itself too seriously. When ‘Awkwafina is Nora From Queens’ premiered, other hit comedies at the time were tragicomedies, comedies that were sadder in tone. While Fleabag was dealing with heartbreak, Nora struggled to clean her room. While BoJack Horseman was dealing with his addiction, Nora couldn’t stop queefing while babysitting. Even plotlines that could potentially be more dramatic are used to foster weirder modes of storytelling. Season one’s ‘Grandma and Chill’ focuses on how Grandma met Nora’s deceased grandfather. While this flashback episode could have easily been one of the more dramatic episodes, it is instead a tongue-in-cheek parody of Korean dramas. This absurdism is only heightened in season two.

The season two episode ‘Stop! Nora Time’ is the weirdest episode yet. The episode follows Nora, who time travels back to 2003 after an MRI. Yes, time travel is possible in the ‘Awkwafina is Nora From Queens’ universe. Now, in 2003, Nora tries to find her younger self and convince her to try harder so that she’ll be successful. In a hilarious twist, Nora accidentally tells the wrong girl her advice since she doesn’t remember what she looked like as a kid, meaning that Nora is why her childhood neighbor is so successful.

This episode uses this surreal idea for some great moments of comedy, from making fun of 2003 trends like iPods to getting to see what Nora acted like as a child. The revelation that Nora accidentally ends up helping her neighbor become successful is the perfect punchline to the episode. Of course, Nora is such a screwup that she can’t even find her younger self in a ‘Back to the Future‘ situation and of course she inadvertently causes the success of the neighbor her father always compares her to. Perhaps this absurd realization makes the wacky ‘Awkwafina is Nora From Queens’ a tragicomedy after all.

Season one starts with a look at Nora’s life. She has a successful job, a cute love interest, and a million-dollar wardrobe. Sounds great, right? Of course, it does because this is revealed to be a dream that Nora wakes up from in her childhood bedroom. Nora’s dreams are like other series that follow millennials. Series like ‘the Bold Type’ and ‘Younger’ follow conventionally attractive millennials as they succeed in their careers and relationships, all while living in beautiful studio apartments. While Nora’s dreams match these shows, her life is the exact opposite.

Millennials are the generation of ambition. They want to be successful in their careers off the bat, long to be famous on social media, and watch countless self-help YouTube videos. Millennials strive for perfection and recognition for their hard work. Nora is the exact antithesis of these ideas. She still lives at home, is single, and spends her days smoking weed. With a million tv shows out there that focus on successful millennials with impossible to live up to expectations, it is refreshing and even comforting to see a millennial protagonist who is a happy screwup. Does she dream of bigger things? Yes. Does this cause her to stop slacking off? Hell no. This slacker energy not only makes Nora a likable and relatable protagonist, but it also leads to some of the funniest moments in the series.

The comedy is especially successful because of the performances. Awkwafina, playing a heightened version of herself, is just as loud and in charge as she is in her films like ‘Crazy Rich Asians’. She is the perfect actor for a series this loud and brash, being able to sell both gross-out humor and cringe comedy. Bowen Yang, of ‘Saturday Night Live’ fame, plays Nora’s cousin, Edmund, the successful millennial that Nora isn’t. Bowen excels at playing the straight man to Nora’s antics, reacting in repulsion to Nora yet still always needing her whenever one of his many ventures blows up in his face.

Bowen is the perfect foil to Awkwafina’s brashness, creating a fun dynamic that can be compared to SpongeBob and Squidward or to ‘the Odd Couple’s’ Oscar and Felix. The real standout performance of the show is from Lori Tan Chinn as Grandma. Lori Tan Chinn looks like she is having the greatest time with each scene she is in, playing the feisty and smartass grandmother. The funniest episodes revolve around her and her friends, like season one’s ‘Atlantic City’ where they fight another group of old women. Lori Tan Chinn brings a fun energy that makes her the star of any scene she is in, no matter how many lines she has.

‘Awkwafina is Nora From Queens’ is an entertaining and surreal comedy about being a slacker in a world that pushes false ideas of success down your throat. While a plot like this could have easily made for a tragicomedy, the series instead offers surreal stories like time travel and ‘Charlie’s Angels’ parodies. While season two is less grounded than the show’s first outing, it still focuses on the same relatable characters and still features the same brand of comedy that made the first season so successful. ‘Awkwafina is Nora From Queens’ is a must-watch for anyone who needs a good laugh and for anyone who is tired of tv shows only focussing on successful millennials.