The Weird World of SNL Movies 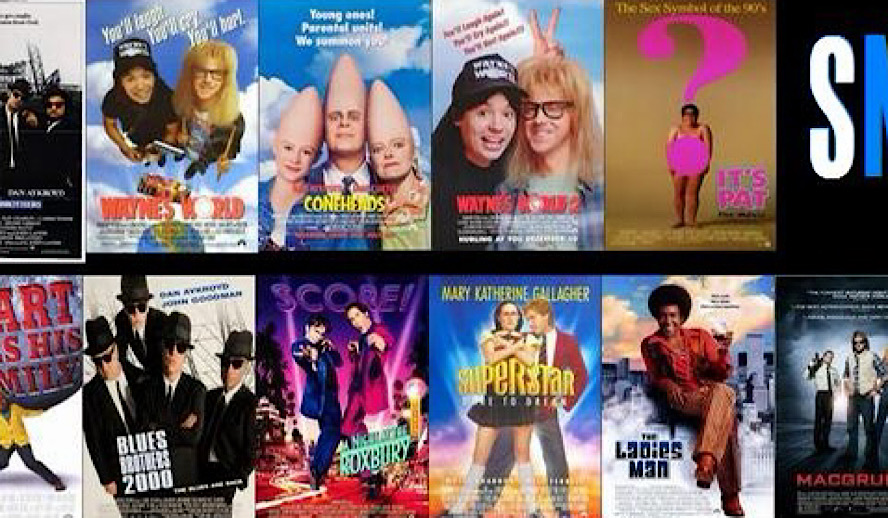 ‘Saturday Night Live’ is arguably the most popular sketch variety show of all time. First premiering in 1975 with the cast of “not yet ready for prime-time players”, the series became a cultural phenomenon thanks to its counter-culture humor and wild personalities. This makes it no surprise that Lorne Michaels and his team would eventually turn some of their successful sketches and characters into theatrical films. Some of these attempts were successful, becoming box office hits and cult classics, while other attempts were less successful. ‘Saturday Night Live’ has only made a handful of films based on their sketches, making their filmography easy to digest but very weird to experience.

The Beginnings of SNL Movies

The first movie based on a ‘Saturday Night Live’ sketch was the 1980’s ‘The Blues Brothers’. The Blues Brothers, Jake, and Elwood, were characters created by Dan Aykroyd and John Belushi, who would perform blues and soul music on ‘Saturday Night Live’. The duo became so popular that they toured for live performances and even came out with their own albums. With the rising popularity of The Blue Brothers it made sense for the characters to star in their own movie. Directed by John Landis, who previously worked with Belushi on ‘Animal House’, the film based on the Blues Brothers is a musical about the duo trying to get the band back together to save their childhood orphanage. The film received praise for its fun vibe, great music (Aretha Franklin, Cab Calloway, James Brown, and Ray Charles all perform in the film), and riveting story.

With the success of ‘The Blues Brothers’, which made 115 million dollars out of a 30 million dollar budget, one would think that ‘SNL’ would turn other sketches into films right away. This was not the case though, with the eighties being an odd time for the series with the original cast leaving the show and showrunner, Lorne Michaels, leaving the show for a period as well. ‘Saturday Night Live’ soon returned to the world of film though in 1992 with ‘Wayne’s World’. The ‘Wayne’s World’ sketches followed the characters of Wayne (Mike Myers) and Garth (Dana Carvey) who hosted their own rock music-themed public access show.

The sketch was wildly popular with the younger audience thanks to their catchphrases and love of music. ‘Wayne’s World’, premiering in 1992 and directed by Penelope Speeris, followed Wayne and Garth as their public access show becomes “commercial”. The film, like ‘The Blues Brothers’, was full of cameo appearances from musicians which included Alice Cooper and Meatloaf. The film was a box office success thanks to its amusing and smart take on the music industry.

After the success of ‘Wayne’s World’, a sequel came out in 1993, directed by Stephen Surjik. The film follows Wayne and Garth as they try to promote their own concert. The film was a bit of a rush job, to say the least, as it was trying to quickly capitalize off the massive success of the first film. With a budget of 40 million, the film surprisingly only made 48 million at the box office compared to the first film, which made 180 million. The box office failure of ‘Wayne’s World’ didn’t stop the ‘Saturday Night Live’ team in their attempts to create another hit film, leading to more weird failures.

Riding The Coattails of ‘Wayne’s World’

After the success of ‘Wayne’s World’, ‘SNL’ tried to strike gold again and again and again. Their first attempt was 1993’s ‘Coneheads’, which was based on the sketch of the same name from the 1970s. The film stars Dan Aykroyd and Jane Curtin reprising their roles as Beldar and Prymaat and Michelle Burke, taking over Laraine Newman’s role as the teenage daughter, Connie. The film follows a pair of aliens with coneheads who land in America and try to live their lives while avoiding the INS. While the film wasn’t a box office or critical success at the time, mainly due to its weirder sense of humor, it has since garnered a bit of a reevaluation due to its satirical look on immigration. While ‘Coneheads’ is now being revisited and is slowly turning into a cult classic, other films are not so lucky.

In 1994, Julia Sweeney’s character, Pat, got a film of their own with ‘It’s Pat’. The film, directed by Adam Bernstein, was a box office and critical bomb, only earning 60,822 dollars (yes, you read that right). Pat is a character that has aged like sour milk with the central joke being that no one can tell if Pat is a man or woman. The character has received some criticism in recent years for the central joke being offensive to non-binary and trans people. Julia Sweeney has come forward and agreed with the criticism, saying that in today’s world, “you would not make fun of somebody for being that way”. After this failure came 1995’s ‘Stuart Saves His Family’, which followed Al Franken’s self-help guru character trying to save the lives of his troubled family. The film, directed by the great Harold Ramis, is a forgotten failure but was given some praise by Siskel and Ebert for being an underrated and smart gem.

After the failures of these films, ‘SNL’ released films that they believed were guaranteed hits. In 1998 came ‘Blues Brothers 2000’ but without the presence of John Belushi, the film was a box office failure and was critically panned for its overall lamer story. Following this failure were two Will Ferrell vehicles, ‘A Night at the Roxbury’ and ‘Superstar’. ‘A Night at the Roxbury’ followed Ferrell’s and Chris Kattan’s ‘the Roxbury Guys’ and was critically panned for being just a one-joke film. ‘Superstar’, following Molly Shannon’s Mary Katherine Gallagher character, received slightly better reviews and has become a semi cult classic in recent years for its absurdity. After this came 2000’s ‘The Ladies Man’ with Tim Meadows playing the character of the same name. The film was both a critical and commercial failure, stopping ‘SNL’ from making another movie for a decade.

‘MacGruber’ and the Future of ‘SNL’ Movies

In 2010, a decade after the failure of ‘The Ladies Man’, came ‘MacGruber’, based on the character by Will Forte. The film, directed by the Lonely Island’s Jorma Taccone, is a tongue-in-cheek parody of action films. The film was a box office bomb, earning only 9 million dollars with a budget of 10 million. While the film was a bomb, it has since become a cult classic. Elliott Smith of the ‘Seattle Post-Intelligencer’ has said, “ ‘MacGruber’ is destined to become quoted in college dorms and midnight showings for years to come ”. With the love that MacGruber received, it was announced in 2019 that a television series was in the works.

After the failure of ‘MacGruber’, ‘Saturday Night Live’ hasn’t made a movie based on their sketches since. The recent news of ‘MacGruber’ may reveal a new future for ‘Saturday Night Live’, where they turn their popular sketches and characters into television series rather than films. This makes sense given the popularity of binging and more alternative comedies being adapted for television such as ‘Three Busy Debras’ and ‘Documentary Now’.  While it may be unlikely for ‘SNL’ to make another movie, television adaptations of their sketches may be the future.

The world of ‘Saturday Night Live’ movies is weird, to say the least. For each film that was a critical success, there are three films that crashed and burned. For each film that is a cult classic is a film that has been forgotten with time. For each film that remains quotable to this day is a film with jokes that make you roll your eyes. Some sketches easily transitioned from the small screen to the big screen while other sketches were too one-note and couldn’t carry a whole film on their own. Some characters were fun enough to lead a film while other characters (ahem Pat ahem) were so annoying that many walked out of the theater. With the many successes and failures of ‘Saturday Night Live’ movies, it is easy to see why one hasn’t been made in over a decade, but hopefully, the planned ‘MacGruber’ series will give a new life to ‘SNL’ sketch adaptations.