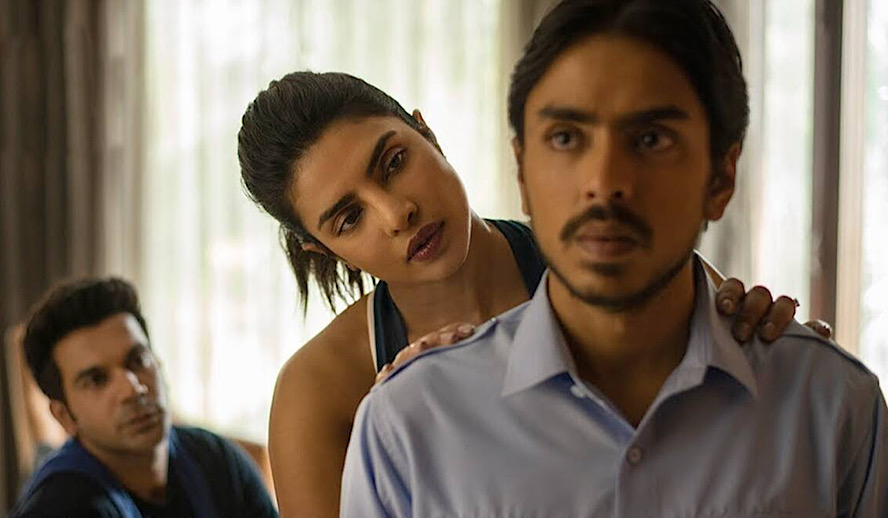 Balram Halwai (Adarsh Gourav) is born into a lowly caste of sweet-makers, destined to fruitlessly serve richer masters until he’s outlasted his usefulness–nevertheless, he does so with unwavering loyalty until he’s so heartlessly betrayed that he sets out to forge his own path by any means necessary.

Based on Aravind Adiga’s 2008 novel of the same name, Netflix’s ‘The White Tiger’ initially elicits comparison with Bong Joon-ho’s ‘Parasite’–set in modern India, it recounts the story of a poor villager who finds work as a driver for a rich family, commenting on the harshly divisive class system in the process. Both discuss the way in which the rich exploit the poor, who in turn finagle what wealth they can from the rich.

However, to dwell on these similarities does a disservice to the poignant portrait of modern India that ‘The White Tiger’ paints, which sets itself apart by highlighting the uniquely Indian pitfalls that lead to the insurmountable oppression of the lower class. Balram is a miraculous rarity, one who has overcome the trap of his birth and elevated his status in life, a creature born once in a generation–a white tiger.

Adapted and directed by Ramin Bahrani, ‘The White Tiger’ is thematically in line with his past work in terms of portraying the struggles of the economically disadvantaged, though stylistically it’s a far cry from the powerful neorealism that initially rose him to prominence with ‘Man Push Cart’ and ‘Chop Shop’.

Instead, Bahrani interweaves punchy, sardonic humor with scenes of tragedy that could otherwise be elements of melodrama. The film is grounded in an authentic portrayal of India, shot on location, and the production design, make-up, and wardrobe flawlessly indicate wealth at a glance–despite such authenticity, it deeply resonates with my outsider perspective. Bahrani, as an Iranian-American, presumably has a similar perspective to mine, which perhaps lends to its global appeal and relatability.

One scene that stood out to me in this regard was when Balram takes driving lessons. In contrast with the DMV, orange traffic cones, and signaling before merging, Balram is coached by a very aggressive man who espouses the philosophy that a good driver must be a warrior–when some punk driver tries to overtake you, you must throw your fist out the window and curse them. When Balram does so, the other driver curses right back. It’s a good example of the film’s sense of humor, but I wonder who exactly it was meant for–are there some who would simply nod their head in agreement at the words being said? As a Korean-American, I have no real way of knowing.

The film makes no secret of its premise, opening ‘in medias res’ as Balram’s masters, Ashok (Rajkummar Rao) and Pinky (Priyanka Chopra Jonas), drunkenly take the wheel to joyride along the streets of Delhi. Unsurprisingly, they kill a child and flee the scene.

The story unfolds through a retrospective narration by Balram, who we’re introduced to as a successful entrepreneur residing in Bangalore, “the Silicon Valley of India.” By contrast, his origins lie in the village of Laxmangarh, where he’s forced to quit school at a young age and work to support his massive family–his job is to smash things, the epitome of pointless, fruitless toil.

Here, Balram outlines another major piece of animal symbolism as it relates to the Indian poor–caged chickens awaiting slaughter, fully aware but quietly accepting of their fate. The Indian servant is unduly loyal to his master. Somewhat paradoxically, he describes the way in which the rich keep their workers in line not only by murdering thieves but by also murdering their entire families.

In this way, Balram describes not only the world into which he was born but the attitudes with which he approaches life. He manages to become a chauffeur and servant to a wealthy family, serving them with selfless loyalty and gratitude that culminates in their ultimate betrayal–after Pinky drunkenly kills the child, they preemptively draft a document that has Balram confessing to the crime. They ask him to sign it, and he does so without protest. The camera hangs on his face as he signs his life away with meek servility, subtleties of revelation, terror, and betrayal creeping into his painted, eager expression.

‘The White Tiger’ A Compelling Cast Led by Adarsh Gourav

This is a good spot to point out that Adarsh Gourav’s performance carries the film–the shot described above would simply not have been possible otherwise, and it’s one of the most affecting shots of the film. Only because Gourav so convincingly portrays the loyal servant does the betrayal have the effect that it does–it’s made more impressive by the fact that ‘The White Tiger’ is his debut in a leading role, executed with unpretentious expertise.

Opposite him are veteran actors Rajkummar Rao and Priyanka Chopra Jonas portraying Balram’s relatively liberal and sympathetic masters, recently returned from America, who nonetheless fall into the traps and foibles of corrupt wealth. There’s a difficult line to tip-toe between detestable bourgeois and preachy progressive that depends not only on their performances to maintain but also on the writing–at times, they’re meant to cross that line.

I was quickly and unexpectedly drawn into the film, engrossed in mere exposition by way of its humorous presentation of grim reality, as well as Gourav’s compelling portrayal of Balram.

Unfortunately, I also felt the film meandered after the midpoint as it departed from its grounded reality and entered the realm of fantasy in pursuit of fulfilling its premise–that is, how Balram ultimately rose from poor villager to successful entrepreneur.

However, I recognize that this works within the story and overarching theme of insurmountable poverty–only through unscrupulous actions and serendipitous circumstances does Balram manage to rise above the rabble, highlighting the extreme barriers to class mobility present in modern Indian society.

I’ve never read the novel on which the film is based, and there’s much more to unpack than what I’ve written about here–political corruption, for instance, is a huge narrative and thematic element that I’ve overlooked, as is the role that religion plays in Indian society.

Priyanka Chopra Jonas, who also executive produced the film, is set to appear in a slew of upcoming projects, including the romantic drama ‘Text for You’ opposite Sam Heughan and Céline Dion, Prime Video’s ‘Citadel’ opposite Richard Madden, Barry Levinson’s ‘Sheela’ (a film she will also produce for Amazon Studios), a comedy about an Indian-American wedding alongside Mindy Kaling, Seth Gordon’s ‘Tulia’ as lawyer Vanita Gupta, and an undisclosed role in ‘The Matrix 4’.

Rajkummar Rao has begun shooting with Bhumi Pednkar for ‘Badhaai Do’, a spiritual sequel to the 2018 comedy-drama ‘Badhaai Ho’, and has committed to begin work for the Hindi remake of the 2020 Telugu thriller ‘HIT: The First Case’.