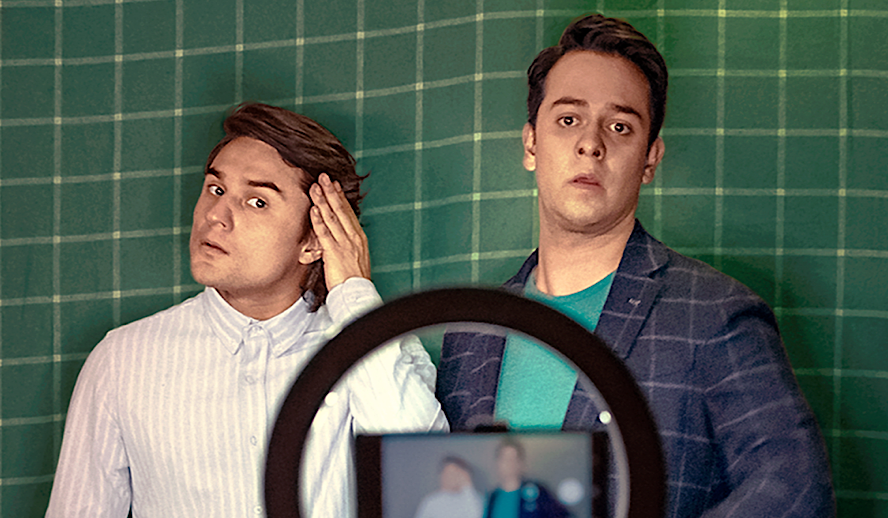 New to Netflix this week is Mexican comedy, ‘Bankrolled’, from writer and director Marcos Bucay. The film tackles start-up culture in a fun, entertaining way featuring two rudderless millennials who, after getting high, pitch a social justice app that gains traction. After the success of their pitch, the two must A. actually create the app and B. navigate success and not succumb to the pressures of the business they are entering. With these obstacles ahead, our two millennial stars have their friendship, and their own values, tested.

‘Bankrolled’ is an incredibly watchable film — grounded in a silly concept with a few great performances, the film overcame most of its shortcomings and delivers a fun, albeit conventional, story. The film attempts to have a greater purpose and message to it which does not hit home in the way the filmmakers intended it to, however, the relationship and dynamic between our two lead characters portrayed by Aldo Escalante and Ricardo Polanco elevate the film and distract from the “movie” problems that arise during the film’s runtime.

Technically the film is crafted very well. There is a vibrant energy to the film that keeps a great pace throughout the film. Scenes tend to cut away to the next scene earlier than one may expect which felt like a key reason the film had and maintained this pep in its step. The cinematography of the film was non-distracting with a few interesting drone shots that were utilized in transitions between scenes. With all of the film taking place on the ground, seeing the city from up high was a cool small addition. Based on its premise I’m sure most assume there is a sequence or two where our main characters are high — these sequences are very well executed and had me chuckling throughout. The filmmakers utilize distorting effects with the camera, color effects, and cutaways. The sequences reminded me very much of something Seth Rogan and Evan Goldberg would cook up or, more specifically, when Jonah Hill and Channing Tatum take the H.F.S. in Phil Lord and Chris Miller’s reboot of the Johnny Depp television series, ‘21 Jump Street’.

The film’s strength truly lies in the hands of its two main characters. As characters, the banter between the two is some of the funniest parts of the film. In the opening sequence, through various elements of visual storytelling, the two are excellently characterized which allows for the writer to expound on them comedically, putting the two constantly at odds and annoying each other with their antithetical personalities. The two characters also go through a specific character arc that, while a tad generic, worked for the story being told. In terms of the performances, the standouts are our main two characters who embody both of the specific personalities that are set up in the opening sequence.

Escalante and Polanco both elevate the film as a whole and should be two audiences to keep an eye on for future roles. While not Aaron Sorkin’s dialogue from David Fincher’s ‘The Social Network’, there are many clever jokes to be had at the expense of a “start-up” culture that I also felt worked well. The style of the film felt very akin to films such as the Vince Vaughn and Owen Wilson comedy ‘The Internship’ and the Anne Hathaway and Robert De Niro film ‘The Intern’ that both feature a fish out of water in the millennial space.

Overall, while the writing is best when dealing with its characters it does stumble into some pitfalls in terms of the plot. The story unfolds about how one would expect it to if they are at all familiar with this sub-genre of films. The film’s predictability is disappointing because, with a few unconventional shifts and surprises in the script, the film could have landed much more firmly in the hearts of its audience. While the film’s individual character arcs are well constructed, the arc between the two characters and how their dynamic evolves is nothing that hasn’t been done before in the comedy genre. There are also several plot conveniences that feel breezed over by the characters for the sake of the story progressing that did not work as well as the filmmakers had hoped.

While the film’s energy is most certainly a strength, there were times that could’ve used an extra second or two to breathe and allow the audience to understand why a particular event occurred or why a character makes a certain decision. The filmmakers leave the audience with a message about social media and the pressures of society to “make it” that while easily identifiable with, felt a little on-the-nose by the end of it.

The filmmakers felt the need to explain when their message was already clear in the subtext of the film; trusting their audience there could have improved the delivery of this valid takeaway the filmmakers wished to leave us with. While these all are notable critiques of the film, speaking personally, none ever distracted enough to disrupt my enjoyment of the film.

‘Bankrolled’ is a raunchy, enjoyable ride with endearing performances, witty banter, and fun characters. While the film falls short in areas such as plot conveniences and conventional story elements, the energy in the pace as well as the arcs of our main two characters kept me locked into the film from start to finish. While the film is not one that I foresee myself re-watching frequently, it is certainly worth an hour and forty minutes of your time for those with a Netflix subscription. If the elements that fall short in the film sound like deal-breakers or if the raunchy, millennial-style comedy is not for you, I would understand the decision to skip this one. However, if the premise of the film intrigues you and you find yourself enjoying some of the films previously compared to this one, I’d recommend giving ‘Bankrolled’ a shot as it may just give you a few laughs.

Check out ‘Bankrolled’ on Netflix today. Be on the lookout for star Ricardo Polanco’s next film, ‘Operación Feliz Navidad’ releasing later this year.